Distressed about the possibility of a Romney-Ryan government? Here’s some good news 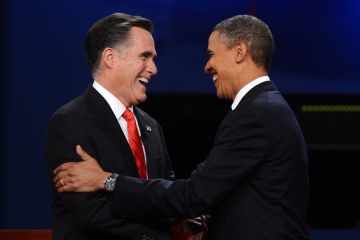 There are many people in the United States who are reluctant to be active against US foreign policy, or even seriously criticize it, because a Democrat is in the White House, a man promising lots of hope and change. Some of them, however, might become part of the anti-war movement if a Republican were in the White House, even though pursuing the same foreign policy. And we can be sure the policy would be the same, for there’s no difference between the two parties when it comes to foreign policy. There’s simply no difference, period, though each party changes its rhetoric a bit depending on whether it’s in the White House or on the outside looking in.

Similarly, the movement for a national single-payer health insurance program has been set back because of President Obama. His health program is like prescribing an aspirin for cancer, but the few baby steps the program takes toward bringing the United States into the 21st century amongst developed nations is enough to keep many American health-care activists content for the time being, especially with Obama facing a tough election. They are satisfied with so little. With a Republican in the White House, however, there might be a resurgence of a more militant health-care activism.

Sam Smith, editor of the Progressive Review, has written: “Barack Obama is the most conservative Democratic president we’ve ever had. In an earlier time, there would have been a name for him: Republican.”

Oh, but there’s Social Security and Medicare, you say. Can Romney be trusted to not make serious cuts to these vital programs? His choice of running mate, Paul Ryan, is practically a poster child for such cuts.

Well, can Obama be trusted to not make such cuts? Consider this recent comment in the New York Times: “[Obama] particularly believes that Democrats do not receive enough credit for their willingness to accept cuts in Medicare and Social Security.”[1]

As somebody once said, the United States doesn’t need a third party. It needs a second party.

The only important cause that might significantly benefit from a Democratic administration is appointments to the Supreme Court, if there is in fact an opening. But does this fully override the benefits of Obama being out of office as outlined above?

Dear Reader: I truthfully do not want to be so cynical. Despite the quips, it’s not really fun. But how else can one react to the Republicans and Democrats given their behavior at their recent conventions? If they can so obviously ignore the wishes of their own delegates, what can the average American citizen expect? Have a look at these remarkable scenes caught on video or read this account of the voice votes at the recent conventions.

How many voters does it take to change a light bulb?

None. Because voters can’t change anything.

So what to do?

As I’ve said before: Inasmuch as I can’t see violent revolution succeeding in the United States (something deep inside tells me that we couldn’t quite match the government’s firepower, not to mention its viciousness), I can offer no solution to stopping the imperial beast other than this: Educate yourself and as many others as you can, raising their political and ideological consciousness, providing them with the factual ammunition and arguments needed to sway others, increasing the number of those in the opposition until it raises the political price for those in power, until it reaches a critical mass, at which point … I can’t predict the form the explosion will take or what might be the trigger … But you have to have faith. And courage.

Some further thoughts on American elections and democracy:

Richard Reeves: “The American political system is essentially a contract between the Republican and Democratic parties, enforced by federal and state two-party laws, all designed to guarantee the survival of both no matter how many people despise or ignore them.”

Johann Wolfgang von Goethe (1749-1832): “In politics, as on the sickbed, people toss from one side to the other, thinking they will be more comfortable.”

Alexander Cockburn: “There was a time once when ‘lesser of two evils’ actually meant something momentous, like the choice between starving to death on a lifeboat, or eating the first mate.”

U.N. Human Development Report, 1993: “Elections are a necessary, but certainly not a sufficient, condition for democracy. Political participation is not just a casting of votes. It is a way of life.”

Roman Emperor Marcus Aurelius: “The opinion of 10,000 men is of no value if none of them know anything about the subject.”

Michael Parenti: “As demonstrated in Russia and numerous other countries, when faced with a choice between democracy without capitalism or capitalism without democracy, Western elites unhesitatingly embrace the latter.”