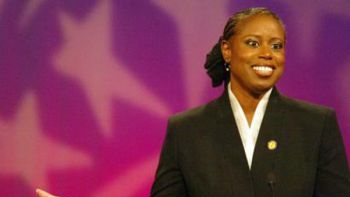 I asked Cynthia McKinney why people acquiesce to the casting aside of their leaders. Her reply:

Bob Marley sang, “How long shall they kill our prophets while we stand aside and look?” I wish I could answer that question. I am not one who has accepted injustice quietly. I don’t understand the bystander mentality. Election fraud right inside the Democratic Convention on two platform issues and there was no press conference of complaint, no protest, no sit-in, no nothing. The meeting is gaveled adjourned and the people are just left staring. Had I been there, of course, I would have done more than stare. In a room of 20,000 people, where were the leaders? The good news is that new leaders are being made every day. With the excesses of the State, more and more people are waking up. And I am glad to reach out to Independents, Republicans, Democrats, Constitutionalists, and every political stripe in-between to find some common ground so we can advance on that ground together. It’s crazy that the Department of Homeland Security is going to tell me who I should fear and not talk to. As a Southerner, I know that people can come together; I know that people can hear and listen and adapt to each other if someone is willing to start the conversation. As the values of the policy makers become more and more distant from those on whose behalf policy is made, we have no choice but to come together and save each other from the growing threat of our own elected officials quietly ripping the Bill of Rights to shreds.

I asked McKinney why some Americans can recognize a leader and others cannot:

Leadership, it seems, frightens some people. It holds them up to a standard that they could never attain. And they know it. Therefore, that’s something better ignored. When one person sacrifices for you and you have rationalized away the need to sacrifice for anyone or any principle other than yourself, you’ve set a pretty low standard for humanity. On the other hand, persons who stand on conviction, and suffer the slings and arrows that come with that, evoke awe in some.

I asked Cynthia McKinney why President Obama had deserted the leadership role bestowed upon him by the American people and instead had fallen into the agenda of the Bush/Cheney/neoconservative Republicans. She replied that:

The policy of killing that is being carried out by President Obama has wiped out all of the moral credit that Black America accrued over their years of resistance to slavery, Jim Crow, racism, poverty, and militarism. The world understood that Black Americans had a different set of values. That they were against wars, against interference in the affairs of other countries, against imperialism, against colonialism, and against White Supremacy. Now, too many Black Americans cheer a President who defends targeted assassination, drone wars in Africa and elsewhere around the world, boots on the ground globally for the military-industrial-complex, and even torture. Sadly, now much of Black America has chosen to abdicate its moral responsibility and spend whatever moral credit they have earned globally in support of an African descendant President who has ripped to shreds the Bill of Rights, damaged life for tens of thousands of innocent individuals here and abroad hurt by the policies of this Administration, not to mention those who have been killed and will be deformed due to the massive depleted uranium being used.

I asked Cynthia McKinney if Washington’s doctrine that “might makes right” would bring “freedom and democracy” to the world. She replied that:

The military might of the US is being used to benefit a very small group of men and women who have the rest of humankind hoodwinked as to the true nature of what is going on. The rest of humankind can’t imagine that amount of greed and willingness to kill and so, are easily fooled and tricked by the individuals who control the new system that is being created. It is, sadly, a case of “willful blindness.”

McKinney, an extremely realistic and well-informed person, unlike anyone in Washington or the media, remains confident that truth and justice will prevail. Her final words were:

We don’t have to go very far to find the authentic leadership that this country needs at this very moment. The leaders we need already walk among us. In the Black and Brown communities, we have always had tremendous leaders who give their all for dignity and justice. I see them every day. They are ubiquitous around us. Given the right context, they will thrive and they will help us to thrive. What we must do is create the environment that will allow them to find their voice and thrive in positions of authority.

All of us must work to create the environment in which decent, compassionate people can become our leaders. America and the Constitution will be safe the day Cynthia McKinney or a similar person is president of the United States. Until then, we are in great peril.