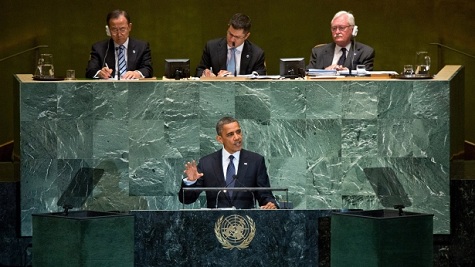 “But just as it restricts the rights of its own people, the Iranian government continues to prop up a dictator in Damascus and supports terrorist groups abroad. Time and again, it has failed to take the opportunity to demonstrate that its nuclear program is peaceful, and to meet its obligations to the United Nations.”

Double standards abound here. The U.S. has, and does, and will continue to support dictators around the world as the need fits their geopolitical needs. This is particularly obvious today with the U.S. renouncing the Assad regime in Syria while utilizing the dictatorial powers of the Saudis and the GCC countries to get rid of it. The U.S. is the creator of some of the more egregious terrorist actions around the world, using them as convenient, with al-Qaeda being both an enemy and a special operations task force for them at the same time. Time and again Israel has failed to take the opportunity to demonstrate that its nuclear program is peaceful, a not carefully guarded secret that it has upwards of several hundred nuclear warheads achieved outside of the Nuclear Non-proliferation treaty (NPT).

“We respect the right of nations to access peaceful nuclear power, but one of the purposes of the United Nations is to see that we harness that power for peace.”

“And make no mistake, a nuclear-armed Iran is not a challenge that can be contained. It would threaten the elimination of Israel, the security of Gulf nations, and the stability of the global economy.”

Can’t be contained? Unlike the Soviet Union, which was contained quite well, with their many thousands of nuclear warheads directed at the U.S.? And perhaps now Russia with fewer warheads, but still with the targeting? The Iranians may be a little bit crazy (as all politicians seem to be), but they have demonstrated over the years that they are not idiotic enough, in spite of their often strange rhetoric, to start a nuclear war. Of course the “security of the Gulf Nations” really refers to the security of U.S. control of the region with the aid of the dictators already in place. Ahh, the real answer is at the end, “the stability of the global economy”, the corporate elite want to continue harvesting the wealth of the world for themselves.

“It risks triggering a nuclear-arms race in the region, and the unraveling of the non-proliferation treaty.”

Whoa horses (again!)! I am confused. A race has to start somewhere, and Israel had nuclear weapons first, and the U.S. was in the process of helping the Shah with a nuclear program, and the U.S. has helped India avoid the NPT….so where exactly did this race begin? And so who is helping to unravel the NPT?

“We know from painful experience that the path to security and prosperity does not lie outside the boundaries of international law and respect for human rights.”

Now this is true, one of those pleasant homilies that allow the U.S. to feel good about its indispensable self when it castigates then attacks other nations for their own good. It is also obvious that the U.S. has not learned from their “painful experience” as it has always been more painful to others than to them; and they are more than willing to sacrifice many of their own native sons along this path to “security”. The U.S. has shown little respect for international law and human rights over the decades, and continues to reiterate this nice homily while using all means—economic and military—to dominate the world.

“But when you strip it all away, people everywhere long for the freedom to determine their destiny; the dignity that comes with work; the comfort that comes with faith; and the justice that exists when governments serve their people—and not the other way around.

“The United States of America will always stand up for these aspirations, for our own people and for people all across the world. That was our founding purpose. That is what our history shows.”

Another pleasant homily followed by more illusory rhetoric. Yes, the people of the world want two or three square meals a day, a decent job, a reasonable place to live, and the ability to participate in their indigenous culture. The U.S., while proclaiming that it will always stand up for these aspirations as it was their founding purpose, have demonstrated quite the opposite. It started with the first settlers and their “civilizing mission” among the natives, whom, according to their religious beliefs, were nothing more than heathen savages.

The actions that speak the truth against the rhetoric continued across the North American continent with the genocide of large numbers of native people, spread through the other Americas, then took off overseas with its newly acquired Spanish possessions. Once overseas, it became a global power looking to control the wealth of the world for its own homeland purposes.

The leaders of the U.S. empire utilize the wonderful rhetoric of humanitarian principles, universal values, and freedom of democracy to cover the reality of their actions around the world. The unfortunate part is that some of them actually believe their own rhetoric, remaining blind and ignorant to the manner in which it is applied via the military and corporate structures, and wonder why the rest of the world “hates” them. Obama’s speech reflected this in its finest form. He is a strong speaker, a good orator, but is also simply the front man for the power of the nation—the corporate nation—that is interested in maintaining its significant wealth and power differential with the rest of the world.

The United States is the largest military nation in the world. It carries the largest debt problem in the world (with perhaps the EU combined following closely behind). It remains in defiance of all the scientific information regarding global climate change.

This combination of ill health and grand-standing rhetoric does not bode well for the future of the U.S. and the world.