The Revolution From Above 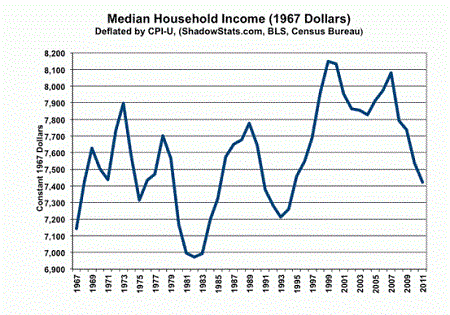 Today the Western peoples are experiencing the destruction of their well-being that is comparable to what the one percent in Rome imposed on Roman citizens and conquered peoples. Here is how John Williams (shadowstats.com, 9-12-12) phrases the wipeout of Americans’ hopes:

“Consumers simply cannot make ends meet. Inflation-adjusted, or real, median household income declined for the fourth-straight year, plunging to its lowest level since 1995. Deflated by the CPI-U, the 2011 reading actually stood below levels seen in the late-1960s and early-1970s.”

“At the same time, despite the ongoing nature of the economic and systemic-solvency crises, and the effects of the 2008 financial panic, income dispersion—the movement of income away from the middle towards both high- and low-level extremes—has hit a record high, instead of moderating, as might be expected during periods of financial distress. Extremes in income dispersion usually foreshadow financial-market and economic calamities. With the current circumstance at a record extreme, and well above levels estimated to have prevailed before the 1929 stock-market crash and the Great Depression, increasingly difficult times are likely for the next several years.”

This chart shows where the median household income of the US Superpower, the “indispensable people,” stands at the culmination of 2011. Americans are as well off as they were in 1967-68. Most Americans cannot pay for fighting multi-trillion dollar wars for 11 years, bailout trillions of dollars in uncovered casino bets by Wall Street, have their middle class jobs sent abroad by corporations, and still expect to have higher personal incomes.

Apparently, Americans are the first people in history who are so idealistic, or so thoroughly brainwashed, that they prefer to pay for wars and bail out banks than to make their mortgage payments and help their children with student loan debt.

The federal court in Germany has ruled that Germans are to be just as idealistic as Americans. The federal court has produced a ruling that it is OK for the EU to require German citizens to provide $190 billion to pay off the private banks who lent too much money to Greece.

In the West the Revolution From Above has succeeded. The peoples are re-enserfed. The promised land is a promised land for the one percent.