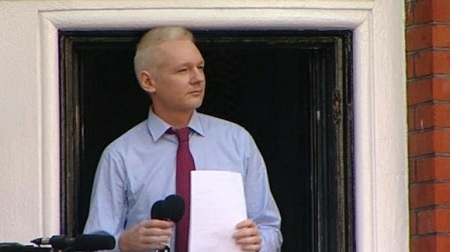 Julian Assange speaks to a crowd from the Ecuadorian embassy in London on August 19, 2012

Julian Assange speaks to a crowd from the Ecuadorian embassy in London on August 19, 2012

“We pledge allegiance to the republic for which America stands and not to its empire for which it is now suffering.”[1]

Perhaps losing the long-held admiration and support of one group of people after another, one country after another, as the empire’s wars, bombings, occupations, torture, and lies eat away at the facade of a beloved and legendary “America”; an empire unlike any other in history, which has intervened seriously and grievously, in war and in peace, in most countries on the planet, as it preached to the world that the American Way of Life was a shining example for all humanity and that America above all was needed to lead the world.

The Wikileaks documents and videos have provided one humiliation after another; lies exposed, political manipulations revealed, gross hypocrisies, murders in cold blood, followed by the torture of Bradley Manning and the persecution of Julian Assange. Washington calls the revelations “threats to national security”, but the world can well see it’s simply plain old embarrassment. Manning’s defense attorneys have asked the military court on several occasions to specify the exact harm done to national security. The court has never given an answer. If hell hath no fury like a woman scorned, consider an empire embarrassed.

And we now have the international soap opera, L’Affaire Assange, starring Sweden, the United Kingdom, the United States, Ecuador, and Julian Assange. The United States’ neo-colonies of Sweden (an active warring member of NATO in all but name) and the United Kingdom (with its “special relationship” to the United States) know what is expected of them to earn a pat on the head from their Washington uncle. We can infer that Sweden has no legitimate reason to demand the extradition of Julian Assange from London from the fact that it has repeatedly refused offers to question Assange in the UK and repeatedly refused to explain why it has refused to do so.

The Brits, under “immense pressure from the Obama administration”, as reported to former British ambassador Craig Murray by the UK Foreign Office,[2] threatened, in a letter to the Ecuadoran government, to raid the Ecuadoran embassy in London to snatch Assange — “[You] should be aware that there is a legal basis in the United Kingdom, the Diplomatic and Consular Premises Act of 1987, which would allow us to take action to arrest Mr. Assange in the existing facilities of the embassy”. Over the August 18 weekend, the London police actually made their way into the building’s internal fire escape, coming within a few feet of Assange’s room, as he could hear. The law cited by the Brits is, of course, their own law, one not necessarily with any international standing.

The UK has now formally withdrawn its threat against the embassy, probably the result of much international indignation toward Her Majesty’s Government. The worldwide asylum system would fall apart if the nation granting the asylum were punished for it. In this violent world of terrorists, imperialists, and other dreadfuls, it’s comforting to know that an old fashioned value like political asylum can still be honored.

A look back at some US and UK behavior in regard to embassies and political asylum is both interesting and revealing:

In 1954, when the United States overthrew the democratically-elected social democrat Jacobo Arbenz in Guatemala and replaced him with a military government headed by Col. Carlos Castillo Armas, many Guatemalans took refuge in foreign embassies. US Secretary of State John Foster Dulles insisted that the new Guatemalan government raid those embassies and arrest those individuals, whom he referred to as “communists”. But Castillo Armas refused to accede to Dulles’ wishes on this issue. Stephen Schlesinger and Stephen Kinzer, in their comprehensive history of the coup,[3] state:

“In the end, Castillo Armas disregarded Dulles’ suggestions. He himself was a product of the widespread belief in Latin America that embassy asylum and safe-conduct passes were a fair resolution to political conflicts. Virtually every politically active Guatemalan, including Castillo Armas, had sought political asylum in an embassy at one time or another and had obtained safe conduct from the government. Dulles’ suggestion for a ‘modification’ of the asylum doctrine was not even popular within the American Embassy.”

It should be noted that one of those who sought asylum in the Argentine Embassy in Guatemala was a 25-year-old Argentine doctor named Ernesto “Che” Guevara.

Baltasar Garzon, the Spanish judge who is one of Assange’s lawyers, came to international attention in 1998 when he indicted former Chilean dictator Augusto Pinochet while he was in England. But the British declined to send Pinochet to Spain to face the indictment, in effect giving him political asylum, and allowed this proverbial mass murderer and torturer to walk free and eventually return to Chile. Julian Assange, not charged or found guilty of anything, is a de facto prisoner of the UK; while the New York Times and the BBC and the numerous other media giants, who did just what Assange did by publishing Wikileaks articles and broadcasting Wikileaks videos, walk free.

This past April, Chinese dissident Chen Guangcheng escaped house arrest in China and took refuge at the American Embassy in Beijing, sparking diplomatic tension between the two countries. But the “authoritarian” Chinese government did not threaten to enter the American Embassy to arrest Chen and soon allowed him to accept an American offer of safe passage to US soil. How will Julian Assange ever obtain safe passage to Ecuador?

In August 1989, while the Cold War still prevailed, many East Germans crossed into fellow-Soviet-bloc state Czechoslovakia and were granted political asylum in the West German embassy. How would the United States — which has not said a word against the British threat to invade the Ecuadoran embassy — have reacted if the East Germans or the Czechs had raided the West German embassy or blocked the East Germans from leaving it? As matters turned out, West Germany took the refugee-seekers to West Germany by train without being impeded by the Soviet bloc. A few months later, the weaker “Evil Empire” collapsed, leaving the entire playing field, known as the world, to the stronger “Evil Empire”, which has been on belligerence autopilot ever since.

In 1986, after the French government refused the use of its air space to US warplanes headed for a bombing raid on Libya, the planes were forced to take another, longer route. When they reached Libya they bombed so close to the French embassy that the building was damaged and all communication links were disabled.[4]

In 1999, NATO (aka the USA), purposely (sic) bombed the Chinese embassy in Belgrade, Yugoslavia.[5]

After Assange took refuge in the Ecuadoran embassy and was granted asylum by the South American country, the US State Department declared: “The United States is not a party to the 1954 OAS [Organization of American States] Convention on Diplomatic Asylum and does not recognize the concept of diplomatic asylum as a matter of international law.”[6]

Ecuador called for a meeting at the OAS of the foreign ministers of member countries to discuss the whole situation. The United States opposed the request. For Washington the issue was simple: The UK obeys international law and extradites Assange to Sweden. (And then, chuckle-chuckle, Sweden sends the bastard to us.) End of discussion. Washington did not want the issue blown up and prolonged any further. But of the 26 nations voting at the OAS only three voted against the meeting: The US, Canada, and Trinidad & Tobago; perhaps another example of what was mentioned above about a dying empire losing the long-held admiration and support of one country after another.

The price Ecuador may pay for its courage … Washington Post editorial, June 20, 2012:

“There is one potential check on [Ecuadoran president Rafael] Correa’s ambitions. The U.S. ’empire’ he professes to despise happens to grant Ecuador (which uses the dollar as its currency) special trade preferences that allow it to export many goods duty-free. A full third of Ecuadoran foreign sales ($10 billion in 2011) go to the United States, supporting some 400,000 jobs in a country of 14 million people. Those preferences come up for renewal by Congress early next year. If Mr. Correa seeks to appoint himself America’s chief Latin American enemy and Julian Assange’s protector between now and then, it’s not hard to imagine the outcome.”

On several occasions, President Obama, when pressed to investigate Bush and Cheney for war crimes, has declared: “I prefer to look forward rather than backwards”. Picture a defendant before a judge asking to be found innocent on such grounds. It simply makes laws, law enforcement, crime, justice, and facts irrelevant. Picture Julian Assange before a military court in Virginia using this argument. Picture the reaction to this by Barack Obama, who has become the leading persecutor of whistleblowers in American history.

Since L’Affaire Assange captured world headlines, the United States, as well as the United Kingdom, have on several occasions made statements about the deep-seated international obligation of nations to honor extradition requests from other nations. The United States, however, has a history of ignoring such requests, whether made formally or informally, for persons living in the US who are ideological allies. Here’s a partial sample from recent years: