The Media Narrative on Morsi and How the U.S. Promotes Democracy in Egypt 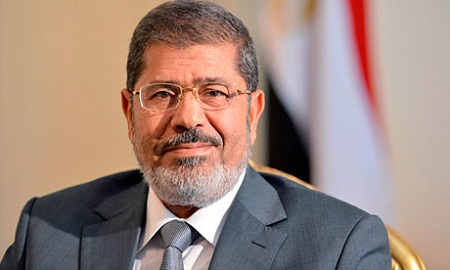 The U.S. media is, unsurprisingly, making their best effort to paint Egypt’s newly elected president, Mohamed Morsi, in a negative light, the general accusation being that he is attempting to usurp power and crack down on dissent and criticism of his rule. While there are certainly rightful concerns about government abuses in Egypt, an examination of how the media has furthered this narrative and the standard it has employed is instructive.

Prior to the presidential election, the military establishment in Egypt, which annually receives $1.3 billion from Washington courtesy of the U.S. taxpayers, dissolved the Parliament, which was to make a new constitution. Then, just hours before the results of the election were announced, the military decreed its own constitution granting itself broad powers over the government-to-be, “all but eliminating the president’s authority in an apparent effort to guard against” a Morsi victory, as the New York Times informed readers at the time, under the accurate headline, “Egypt’s Military Cements Its Powers as Voting Ends”.

The accurate narrative of a military establishment seeking to keep its tight grip on power by usurping authority, since the election, has been replaced with a narrative of Morsi attempting to do the same. Thus, when Morsi sacked the defense minister and chief of staff of the armed forces and cancelled the military’s constitutional decree, since it stood to reason that this action “might in part represent a shift in Egyptian foreign policy away from the United States”, it was described by the establishment journal Foreign Affairs as part of a “power grab” by Morsi, an effort at “consolidating power”.

While acknowledging that Morsi’s move to reverse “the power grab by the council of generals” “could prove a step toward a truly democratic Egypt”, the Washington Post in an editorial nevertheless criticized the president’s action as “extralegal”—never mind that the military’s actions had been “extralegal” in the first place. The editorial also lectured the “Mr. Morsi also must learn to live with a certain amount of criticism” and criticized that “authorities announced prosecutions of journalists, some of them close to the military and not particularly sympathetic to Mr. Morsi.” This was all reported under the headline, “Egypt’s Morsi must moderate his power grab”.

The Post included a link to a BBC report on the announced prosecutions, but didn’t inform readers that the charge against one of the two journalists was “incitement to murder” President Morsi. The charge against the other, according to the report, was publishing “‘false information’ deemed insulting” to the president. Of course, incitement and libel both happen to be crimes in the U.S. for which people can be prosecuted. Just doing a quick Google search, an example can be found where a blogger in New Jersey was arrested for “encouraging violence against Connecticut legislators” and another of a Colorado student “arrested for criminal libel” for altering a photo of his professor to look like Gene Simmons, the lead singer of KISS, and posting it to his website. Such incidents in the U.S. are not typically accompanied by blaring headlines of government usurpation of power and crackdown on dissent. Nor is this example from Egypt in any way comparable to, say, the Obama administration’s war on whistleblowers.

As it turned out, the sacked generals “accepted medals of commendation from Mr. Morsi and will serve as his advisers”, the New York Times informed readers in an editorial that criticized his “disturbing tendency to use heavy-handed tactics to restrict the media”. On Friday, the editors of the Times wrote that a street demonstration in Cairo was a sign that Egypt’s newly elected president, Mohamed Morsi, is “having a hard time hearing those voices” of the public. The editorial continued: “Many Egyptians worry that Mr. Morsi and the Brotherhood are seeking to monopolize power, including imposing serious restraints on freedom of the press. The government recently brought charges against one of Mr. Morsi’s harshest critics, Islam Afifi, the editor of a newspaper, Al Dustour, for insulting the president and disturbing the public order in articles and editorials.”

The editors linked to another article pointing out that Morsi had in fact “outlawed the pretrial detention of people accused of press crimes, effectively freeing one of his toughest critics, a newspaper editor who was detained just hours before the law was passed.” And, of course, the abusive Egyptian law under which anyone who “affronts the president of the republic” may be arrested dates back to 1996 and the rule of Washington’s favored strongman, Hosni Mubarak, of whom Secretary of State Hillary Clinton in 2009 said, “I really consider President and Mrs. Mubarak to be friends of my family”.

The Times continued: “Prosecutors also brought charges against a television host, Tawfik Okasha, who has denigrated the Brotherhood and the uprising that ousted Mr. Mubarak and on one show seemed to threaten both Mr. Morsi and the Brotherhood with violence. Violent threats or acts can never be condoned, but criticism of political leaders should not be a crime, especially in a country aspiring to be a democracy.” Thus, while rightly pointing out that mere criticism should not be a crime, the editors acknowledged the possibility that there might actually be some truth to the charge of incitement. The editors acknowledged further into the piece that Morsi had “effectively freed Mr. Afifi” and that the charges that still stood were “brutal Mubarak-era press laws”, but these facts naturally didn’t stop them from suggesting in the first paragraph that Morsi was deaf to the voices of the people.

The central theme is clear. Consistent with the goal of manufacturing consent for U.S. policy, Americans must be made to think that the new government under the elected former Muslim Brotherhood member (Morsi resigned from the group upon taking office) is a threat to the social order and to freedom in Egypt, the corollary of which is that the power of the civilian government must be “balanced” or “moderated” by the power of the military establishment long supported by Washington.

Thus, when Senator Joseph Lieberman bragged last year that the U.S. “should feel very good about the assistance we have given the Egyptian military over the years since the Camp David peace with Israel, because the Egyptian military really allowed this revolution in Egypt to be peaceful and let the people carry out their desires for political freedom and economic opportunity”, Americans can understand that to mean that they should pat themselves on the back since the response of the U.S.-backed military establishment to the popular revolution in Egypt was mostly limited to using tear gas canisters marked “Made in U.S.A.” against peaceful protesters, while the number of people they injured was kept down at around 6,400, and the number killed to a mere 846—just another example of how the U.S. helps to promotes democracy around the world.