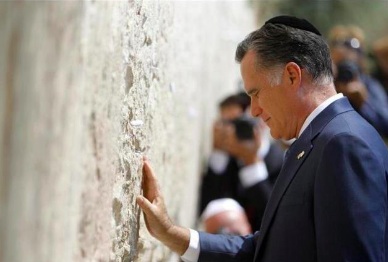 BEIRUT — According to the Obama Presidential campaign issues staff, temporarily operating out of the Democratic National Committee headquarters at 430 South Capitol Street, SE in Washington, D.C., Team Obama scored an electoral coup again rival Mitt Romney this week by moving fast to pull the rug from Romney’s hoped for advantage from his obsequious Israel trip. That visit, which ranks among the all-time-most-groveling led to even Zionist media outlets including the New York Times and Washington Post dissing Mitt’s trip as “un-presidential.”

“Slick Jimmy”, as Mr. Carville is fondly known back home in Big Easy bars along Bourbon Street, as well as some of his associates are explaining why:

The Republican National Committee, now essentially part of the Romney campaign, even though it is supposed to stay neutral until the party chooses its nominees at the August 27-30 Tampa, Florida Republican Convention, had worked for  over a month with AIPAC and Florida  Republican Congresswoman Ileana  Ros-Lehtinen to help deliver pro-Israel votes and cash to Romney.

The plan was to cap off Romney’s Israel trip with another round of sanctions against Iran which he would promote at a major photo op while bashing Syria in the process. This was to be achieved via yet another law, this time H. R. 1905 named by AIPAC as The Iran Threat Reduction and Syria Human Rights Act of 2012.

It was last December the Iran Threat Reduction Act draft law on the House side heaped more sanctions on Iran. The problem was that the White House was then tepid and US Senate Foreign Relation Committee Chair, John Kerry (D-Mass), did not cooperate as he continues to work to launch a diplomatic initiative with Tehran on behalf of Obama.

The current AIPAC version has emerged from Israel lobby dominated House-Senate negotiations and it includes the most flagrant layers of sanctions ever enacted to undermine the economy of any country. Congressman Ron Paul rose to speak in strong opposition to H.R. 1905 on August 1, labeling it a “declaration of war against Iran even though Iran has no nuclear weapons program”.  And so it is.

H.R. 1905 sponsor and House Foreign Affairs Committee Chairwoman Ileana Ros-Lehtinen (R-Fla.) was almost giddy as she promised to deliver Florida to Romney and gushed: “This bipartisan, bicameral Iran sanctions legislation strengthens current U.S. law by leaps and bounds and it updates and expands U.S. sanctions, and counters Iran’s efforts to evade them. The bill sends a clear message to the Iranian mullahs that the U.S. is committed, through the use of sanctions, to preventing Iran from crossing the nuclear threshold.”  She reminded the media that Romney told Israeli officials in Jerusalem that the Obama administration was not doing enough to stop Iran’s nuclear program and that:  “Essentially president Obama is doing nothing!”

H.R. 1905 is a catch-all frenzied election year gimmick that lumps together legislative initiatives of all sorts in order to corral votes for Romney immediately after his Israel trip, which left little doubt that Israeli leaders believe that Israel will have less leverage to squeeze the US to take on yet another big military action if Obama is re-elected than if Romney wins.

In its letter to Congressmen, designed to aid Mitt Romney, AIPAC writes:  “America and our allies must unite in a tough response to Iran’s belligerent approach. We must continue to send a strong message to Tehran that it will face unremitting pressure until it complies with its international obligations and end its nuclear weapons quest. We strongly support The Iran Threat Reduction and Syria Human Rights Act (H.R. 1905) and urge you to vote YES.”

Learning what the Israeli lobby was attempting from its contacts at AIPAC, Obama campaign strategists moved fast and decided to have their candidate use his constitutional powers and undercut the Romney strategists toute de suite. Obama did so and angered AIPAC and Republican leaders in Congress before the lopsided House vote on July 12, when the White House quickly invited supporters of Israel to a media event at which the President issued an Executive Order, which he explained included “Two major actions to further isolate and penalize Iran for its refusal to live up to its international obligations regarding its nuclear program and to hold accountable financial institutions that knowingly provide financial services to Iranian banks.”

As a result of pre-empting AIPAC’s H.R. 1905, and despite ‘feel good’  further action by Congress on H.R. 1905, the Obama campaign says they gutted the AIPAC/Republican/Romney scheme while once more assuring Israel and its lobby of Obama’s willingness to use all his Constitutional powers on Israel’s behalf and to target its “existential threat” Iran.

According to two congressional insiders, the quick-witted maneuver by the Obama campaign is a key reason their candidate currently leads in the swing states of Florida, Ohio, and Pennsylvania while reminding the media that no presidential candidate since 1960 has won the White House without carrying two of these three states.

Meanwhile, Romney operatives are seeking alternative ways to convince Israel to maintain its support and cash for his campaign during the next nine weeks of what “Slick Jimmy” is calling, “American Democracy at work.”