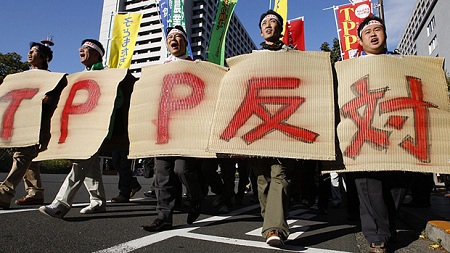 Information has been leaked about the Trans Pacific Partnership, which is being negotiated in secret by US Trade Representative Ron Kirk. Six hundred corporate “advisors” are in on the know, but not Congress or the media.  Ron Wyden, chairman of the Senate trade subcommittee that has jurisdiction over the TPP, has not been permitted to see the text or to know the content.

The TPP has been called a “one-percenter” power tool. The agreement essentially abolishes the accountability of foreign corporations to governments of countries with which they trade. Indeed, the agreement makes governments accountable to corporations for costs imposed by regulations, including health, safety and environmental regulations. The agreement gives corporations the right to make governments pay them for the cost of complying with the regulations of government. One wonders how long environmental, labor, and financial regulation can survive when the costs of compliance are imposed on the taxpayers of countries and not on the economic activity that results in spillover effects such as pollution.

Many will interpret the TPP as another big step toward the establishment of global government in the New World Order.  However, what the TPP actually does is to remove corporations or the spillover effects of their activities from the reach of government. As the TPP does not transfer to corporations the power to govern countries, it is difficult to see how it leads to global government. The real result is global privilege of the corporate class as a class immune to government regulation.

The TPP is open to all countries.  Currently, it is being negotiated between the US, Australia, Brunei, New Zealand, Singapore, Vietnam, Chile, and Peru.  Australia, according to reports, has refused to submit to the private tribunal system.

What are we to make of the TPP?  It is perhaps too early to have all the answers. However, I can offer some ways of thinking about it.

In the criticisms of the TPP, much emphasis is placed on the costs that corporations of foreign members of the agreement can impose on the US.  However, US corporations gain the same privileges over those countries, as the agreement gives every country’s corporations immunity to the other countries’ laws.

It could be the case that US corporations believe that their penetration of the other countries will greatly exceed the activities in the US of Brunei, New Zealand, Peru, et al.  However, once Japan, Canada, China and others join TPP, the prospect of American firms getting more out of the agreement than foreign firms disappears, unless from the US perspective the definition of foreign firm includes US corporations that offshore the production of the goods and services that they market in the US.  If this is the case, then US offshoring firms would be exempt not only from the laws and courts of foreign countries, but also exempt from the laws and courts of the US.

This point is possibly moot as the agreement requires all governments that are parties to the TPP to harmonize their laws so that the new corporate privileges are equally reflected in every country. To avoid discriminatory law against a country’s own corporations that do not engage in foreign trade, harmonization could mean that domestic corporations would be granted the same privileges as foreign investors. If not, domestic firms might acquire the privileges by setting up a foreign subsidiary consisting of an office.

As  the TPP is clearly an agreement being pushed by US corporations, the implication is that US corporations see it as being to their relative advantage. However, it is unclear what this advantage is.

Alternatively, TPP is a strategy for securing exemption from regulation under the guise of being a trade agreement.

Another explanation, judging from the unusual collection of the initial parties to the agreement, is that the agreement is part of Washington’s strategy of encircling China with military bases, as the US has done to Russia. One would have thought that an agreement of such path-breaking nature would have begun with Japan, S. Korea, and the Philippines. However, these countries are already part of China’s encirclement.  Brunei, Singapore, New Zealand, and especially Vietnam would be valuable additions. Are the special privileges that Washington is offering these countries part of the bribe to become de facto outposts of American Empire?

Yet another explanation is that Ron Kirk is caught up in the deregulatory mindset that began with the repeal of Glass-Steagall and financial deregulation. If financial markets know best and are self-regulating, requiring no government interference, then so also are other markets and businesses. [Editor’s note: Glass-Steagall was not repealed in full; the separation in the Glass-Steagall Act of  commercial from investment banking was repealed while the Federal Deposit Insurance was not, meaning that taxpayers would ultimately be on the hook for any risky activities of the banks necessitating bailouts.]

Some ‘free market’ economists view regulations as “takings.” The argument is that regulations take corporate property—profits, for example, by making corporations comply with health, safety, and environmental regulation—just as government takes private property when it builds or widens a road.  Therefore, corporations should be compensated for takings that result from regulation. As the argument goes, if government wants corporations to protect the environment, the government should pay the corporations for the cost of doing so. This argument gets rid of “external costs” or “social costs”—costs that corporations impose on others and future generations by the pollution and exhaustion of natural resources, for example. The argument turns social costs into compensation for takings.

The TPP is likely serving many agendas.  As we learn more, the motives behind the TPP will become clearer.  From my perspective as an economist and former member of government, the problem with Ron Kirk’s TPP is that the agreement is constructed to serve private, not public interests.  Kirk is a public official charged with serving and protecting the public interest. Yet, he has conspired in secret with private interests to produce a document that exempts private corporations from public accountability.

There is a paradox here. While financial corporations and now all corporations are being made independent of government, US citizens have lost the protection of law and are now subject to being detained indefinitely or murdered without due process of law. Corporations gain an unimaginable freedom while citizens lose all freedom and the rights that define their freedom. Similarly, foreign countries, which as members of TPP can be exempt from US law, are subject to “pre-emptive” US violation of their air space and borders by drones and troops sent in to assassinate some suspected terrorist, but which also kill citizens of those countries who are merely going about their normal business.

Public Citizen’s analysis of TPP can be found here and the leaked document here.