Do we need another 9/11 conspiracy theory? 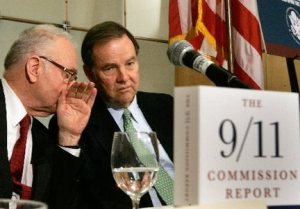 The terrorist attacks of September 11, 2001 were a turning point in world history. We have been told that these attacks were planned and implemented by nineteen Arab Muslim hijackers under the direction of the leaders of al Qaeda. According to the official account, this criminal conspiracy received no help or funding from any government.

Unfortunately, this explanation fails to address a majority of the evidence and leaves most of the critical questions unanswered.[1] In fact, the reports that constitute the official account do so little to explain what happened that it is possible that, to this day, we know very little about who was behind the attacks. That fact is alarming to many people, given that so much war and unprecedented change has been driven by the official account.

On closer inspection, the 9/11 Commission Report provides only 90 pages of discussion about what actually happened on the day of 9/11, found in chapters 1 and 9 of the report. The remainder of the report is devoted to promoting a myth behind the organization called al Qaeda, and suggesting what to do about it.

The 9/11 Commission told us in its report that “Our aim has not been to assign individual blame. Our aim has been to provide the fullest possible account of the events surrounding 9/11 and to identify lessons learned.”

Author David Ray Griffin revealed that the Commission report not only failed to provide the fullest possible account, it omitted or distorted many of the relevant facts.[2] The Commission report also gave us a new explanation for one of the most alarming aspects of the attacks—the complete failure of the U.S. national air defenses.  The new explanation represented the third, distinctly different, version of how the air defenses failed.

A number of excuses were given by Commission members for the shortcomings of its report. In their 2006 book, Without Precedent, the leaders of the Commission, Thomas Kean and Lee Hamilton, said “we were set up to fail.”[3] When I met with Hamilton, he told me that the Commission faced too many questions, too little funding, and too little time.

But the fact is that, if it had not been for 9/11 victim’s family members working diligently to publicize problems with the emerging official myth, there would never have been a 9/11 Commission investigation. Both President Bush and Vice President Cheney actively sought to limit the investigation into the attacks.

As CNN reported in January 2002, President Bush personally asked Senate Majority Leader Tom Daschle to limit the congressional investigation. This unusual request came after a “rare call to Daschle from Vice President Cheney.” Daschle stated that Cheney “expressed the concern that a review of what happened on September 11 would take resources and personnel away from the effort in the war on terrorism.”[4]

When the political pressure caused by the victim’s families grew too great, the 9/11 Commission was born. But the Commission was given less than one tenth of the funding that had been allotted to investigate the sexual exploits of President Clinton just three years earlier. Clearly, the U.S. government did not want an in-depth investigation into 9/11.

There were several brief inquiries early on. These included the CIA Inspector General (IG) inquiry, the FBI IG inquiry, and the Joint Congressional Inquiry. All three of these were focused on a limited hangout viewpoint of the shortcomings of U.S. intelligence agencies related to the alleged hijackers. The 9/11 Commission, which stated its goal of presenting “the fullest possible account” built its work on the earlier inquiries and used many of the same staff for its investigation.

To lead the Commission, President Bush first appointed Henry Kissinger. As with the 14-month delay in getting started, this appointment was a strong indication that the investigation was not intended to be a fact-finding mission. Kissinger’s refusal to release his client list, which was expected to include the name Bin Laden, forced his resignation and replacement by Kean and Hamilton.[5] Kean’s ties to the oil and gas industry and Hamilton’s history as an intelligence agency insider, along with similar conflicts of interest among the rest of the Commission members, were issues that remained unaddressed.

In November 2003, one of the 9/11 Commission members quit. This was Senator Max Cleland of Georgia, who was outraged at the process and had previously said “This is a scam” and “It’s disgusting. America is being cheated.” In October 2003, Cleland told the New York Times that — “As each day goes by, we learn that this government knew a whole lot more about these terrorists before September 11 than it has ever admitted.”[6]

The Commission’s report came out nine months later, in July 2004, and was hailed as a great achievement by the publicists hired to promote it. Unfortunately for the rest of us, the report failed to answer 70% of the questions provided by the 9/11 victim’s families who had inspired the Commission’s charter.

Throughout the report, the Commission claimed that “no evidence” existed, or could be found, to explain aspects of the 9/11 events. This was reminiscent of comments made by President Ford to his press secretary, Ron Nessen, about Ford’s work on the Commission that investigated the assassination of President Kennedy. Ford told Nessen that he and his colleagues on the Warren Commission – “were very, very careful when we wrote our final report not to say flatly that Lee Harvey Oswald acted alone and was not part of a conspiracy.” Ford clarified that the Warren Commission was “very careful to say we ‘found’ no evidence of a conspiracy.”[7]

The 9/11 Commission took this “we found no evidence” phrase to an extreme and used some form of it 36 times within its report.[8] Four of those instances highlight the fact that the 9/11 Commission could not explain how any of the alleged hijackers entered the cockpits of any of the four hijacked planes. Other instances reflected that the Commission put almost no effort into allegations of insider trading, or how the attacks were funded, which the Commission said was “of little practical significance.”[9]  In an honest investigation, the funding would be seen as a strong clue to who was behind the attacks.

Although the Commission addressed the World Trade Center (WTC) in a brief, superficial manner, the detailed explanation for what happened to the Twin Towers and WTC Building 7 was left to the National Institute of Standards and Technology (NIST). At the time, this agency reported through the U.S. Department of Commerce under the direction of Bush’s old friend and oil industry colleague, Donald Evans.

Like the 9/11 Commission Report, the NIST reports, which were issued in 2005 and 2008, represented only the last in a series of failed official explanations for the destruction of the WTC buildings. NIST avoided much of the evidence for what happened to the buildings by providing only a “collapse initiation sequence” for the towers, and by performing no physical testing to support its unusual explanation for WTC 7.

The timing of NIST’s WTC 7 report appeared to be scheduled for dual political purposes, to coincide with the seventh anniversary of 9/11 and to give the appearance of finished business at the end of the Bush Administration. That is not surprising, as the timing of NIST’s other reports coincided with political events as well. These included the draft report on the towers in October 2004 – just before the election, the final report on the towers – just before the fourth anniversary of 9/11, and NIST’s first “responses to FAQs” – just before the fifth anniversary. All of them appeared to involve politically motivated release dates.

In each case, the dates allowed time for the mainstream media to quickly present the official story while public interest was high, but did not allow time for critical questioning of the related documents, which were extensive and deceptive. With the WTC 7 report, the public was given just three weeks prior to 9/11/08 to comment on a report that was nearly seven years in the making.

With time it was discovered that the WTC 7 report was a very poor attempt at a realistic explanation for what happened to that 47-story building, which had not been hit by a plane.[10] It seemed that NIST didn’t even try to present a logical explanation for what happened, but simply relied on the idea that a fawning media would help them close the public discussion quickly. In the future, people will learn a great deal from the NIST collaboration with certain media, in terms of our present culture and the extent of our ability to deceive.