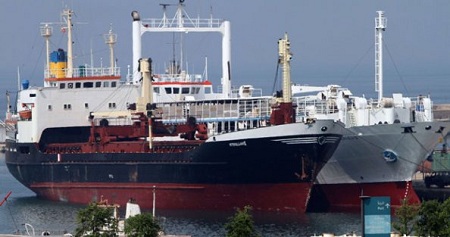 Tripoli, LEBANON — It would be an incautious stretch to suggest any sort of parity between Watergate and the unfolding Lutfallah II arms shipment-to-Syria drama, which each day brings more revelations. But some of what we are daily learning about the who, what, and why of Lutfallah II reminds some of us of a Watergate-type atmosphere including  “bit by bit, drip by drip” revelations,  denials, setting up fall guys, and remarkable examples of incompetence.

The still unfolding Lutfallah II weapons running misadventure—in which a claimed Syrian-owned vessel registered in Sierra Leone, but apparently flying the Egyptian flag, was detained off the Lebanese port of Batoun by the Lebanese Army Marines because it was sailing too high in the water and appeared “suspicious,” and was then found to contain 300,000 pounds of weapons—may erupt unpredictably with serious political consequences for the region.

They did. The rest is history.

If a ‘deep throat’ appears in Libya, Qatar of elsewhere, and offering advice to reporters who appear in Benghazi and Misrata in order to dig into what really happened, it might be that he will counsel:  “Follow the weapons”.

Eyewitness Hassan Diab is a Libyan researcher who has been working with a group of American and International lawyers preparing a case against NATO to be filed with the International Criminal Court. Hassan and three of his friends actually saw the ship Lutfallah II being loaded in Benghazi, Libya. Hassan claims that it is well known at the docks that Qatar and Saudi Arabia control a total of five warehouses in the area of Benghazi and Misrata and supplied the weapons and money to hire the  Lutfallah II container vessel.

Libyans in the area are reporting that the intercepted arms are from both Gadaffi stockpiles left over from NATO’s Libya campaign and some from the Qatar-Saudi six month weapons pipelines into Libya. When NATO declared a cessation of its bombing on Halloween night, October 31, 2011, the scramble for weapons began and Qatar stored and purchased whatever weapons came to its notice and from various militias who were willing to do business.

Libyans and foreign dock workers at Benghazi Port, who observed the Lutfallah II being loaded, saw three containers filled with 150 tons of weapons put onboard, although the initial plan, according to the owner of the boat was to ship as many as 15 containers.  It is estimated that they would have carried more than 2,000 tons of weapons.

A Lebanese judicial source, who is a sitting judge based at Beirut’s La Maison des Avocates and advises the Lebanese government on procedural rules that ought to be followed in this case, confirmed to me and also to the Beirut Daily, As-Safir, that the Lutfallah II shipment was funded by two Syrian businessmen living in Saudi Arabia. In addition, the ship’s captain in Syria as is the gentleman who claimed ownership of the shipment. All are affiliated with the Syrian opposition and all are seeking regime change in Syria.

According to a late breaking report,  all have been arrested and remain in custody despite  claims that they thought the cargo was general merchandise. Libya does not export anything much but its light crude oil and the Lutfallah II is clearly no oil tanker.  Crew members of the container are facing trial on charges of illegal gun-running.

The owner reportedly told his interrogators, including Military Prosecutor Judge Saqr, that “It would be against Lebanese law and international maritime law for me to demand to examine the content of the containers.”  Some international lawyers would argue that the law is exactly the opposite in both, and that international law establishes not just the owner’s right to inspect cargo being carried on his ships—for hazardous or contraband cargo, etc.—but that maritime law clearly mandates his responsibility to do so.  Likewise, his insurance company.

The US-Saudi backed Future Movement was not involved in the arms shipment according to party official Mustafa Allouch. However, he later told Lebanon’s OTV that “The Syrian people have the right to find the appropriate means to defend themselves.” The Free Syrian Army has denied any links to the weapons-carrying vessel.

Hezbollah official Ammar Musawi praised the Lebanese army for its seizure of a Syria-bound illegal arms shipment and urged the authorities “to prevent Lebanon from turning into a conduit of destruction toward its neighbor”.  “For the sake of Lebanon’s stability, I urge our authorities  to exert greater effort to prevent Lebanon from turning into an arena through which the tools of crime cross into Syria, as the involvement of some Lebanese in fueling the situation in Syrian will have negative repercussions on Lebanon,”  Hezbollah International Relations Director said.

On May 2, Syria’s ambassador to Lebanon, Ali Abdel-Karim, following a meeting with Lebanese Foreign Minister Adnan Mansour, accused Gulf countries, including Qatar and Saudi Arabia, of being behind the Syria-bound arms shipments.

“The ship was bound for the Syrian opposition; this is sure given that the political and security leaderships in Qatar, Saudi Arabia and other countries are behind these acts, which undermine the security of Syria, Lebanon and the region.”

Many questions remain in need of answers. Any serious first year law student would ask the questions that presumably Lebanese investigating judges and the media will ask. A few of the more obvious ones would include:

Who funded the shipment discovered in the cargo bay of the Lutfallah II? Who had custody over the original 12 containers of what was planned, according to the jailed owner, as a shipment of over two million tons of “general merchandise”?

Who supplied the weapons and from which warehouse locations in Libya were they taken? Who controls the warehouses? Who made the decision to hold back 12 of the original contract and why?  Where are the 12 containers? Who prepared the ships manifest? What was the involvement, if any, of the Syrian owner of the Lutfallah II? Why was the Lutfallah II not searched at the port of Alexandria as well as Turkey?  It docked at both. Why was it given ‘green light passage’ by Israel and UNIFIL?

Eyewitnesses claim some activity on the Lutfallah II was evident while it was docked in Turkey? What was the activity? Which, if any, Lebanese politicians and political parties were involved. Who was to meet and take custody of the shipment once it arrived at the Tripoli, Lebanon dock? Which land routes into Syria were to be used following the offloading of the cargo at Tripoli Port?

It is not for this observer to offer advice to investigative journalists, whether free-lance or corporate, but as a fairly long-term US Congressional aid in the post-Watergate era who actually read the transcripts of US Senator Howard Baker’s Watergate Hearings, I would have thought that one or more might want to book a flight to Benghazi, Libya, toute de suite, with an inclination to:  Follow the Money and follow the Weapons!