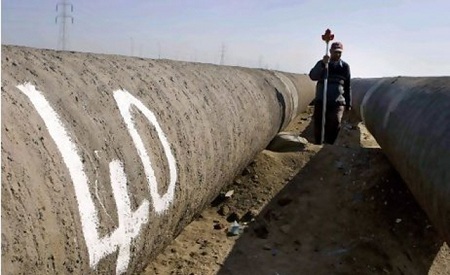 Will Sadat’s Camp David and the Zionist Embassy be next?

BEIRUT — The Egyptian people are demanding the return of their sovereignty.  According to recent opinion surveys, they believe it was partially ceded to Israel by the two post-Nasser dictators, Anwar Sadat and Hosni Mubarak, at the behest of American administrations, from Nixon to Obama.

The removal of three humiliating shackles for Egyptians, the gas give-away scheme, the 1979 Camp David Accords, and the US-forced recognition of Israel constitute a strategic national security objective for most of Egypt’s 82 million citizens.  According to the results of an opinion poll, conducted for Press TV and published on October 3, 2011, 73 percent of the Egyptian respondents opposed the terms of the agreement. Today the figure is estimated at 90%.

For the past eight years, the 2004 gas deal has been widely unpopular, and one of the charges in the current indictment against Mubarak is that the deposed President sold Egypt’s gas as part of a sweetheart deal involving kickbacks to family members, associates and Israeli officials. Mohamed Shoeib, the chairman of state-owned Egyptian Natural Gas Holding Company, told AFP last week that the gas deal was “annulled with the Israeli East Mediterranean Gas Co (EMG), because the company failed to respect conditions stipulated in the contract.”

Once Mubarak was toppled and his 14 secret police agencies began to lose some of their omnipresence, the gas line to Israel was severed 14 times in 12 months by a series of explosions that cut off 40% of Israel’s supply, which was used to generate electricity.

In the recent parliamentary elections and now during the presidential campaign, Egyptians have been debating relations with Israel publicly for the first time. Previously Mubarak was Israel’s protector and, like some other Arab leaders still clinging to power, ignored his people’s demands for actively supporting for the liberation of Palestine.

In late January 2011, an Alexandria University student briefed this observer and a small group of Americans and Europeans sitting on benches opposite the wonderful ancient city’s majestic Great Library. He explained, recalling the demands of the Tahrir Square protests on January 25, 2011, “Our slogans at Tahrir Square were bread, freedom, dignity, and social justice. That was almost exactly one year ago. God willing, we will soon achieve the demands of our historic revolution which include canceling Camp David and withdrawing recognition of the Zionist regime still occupying Palestine.  Egypt must again lead the Arab Nation’s sacred obligation to liberate Jerusalem and all of Palestine from the river to the sea.”

A stunning hijabed female student continued the dialogue, giving us her opinion:  “The USA bought some of our leaders with billions in generous cash from your people but without any real benefit to ours.  Camp David was essentially a private agreement by Sadat and then Mubarak. Our people had no say and were never asked whether we agreed.  If we protested, we were jailed or worse.  Now, the Egyptian people are gaining power despite a likely military coup by the SCAF military junta before the scheduled June elections.”

Israeli officials, in tandem with the US Zionist lobby, are claiming that the abrogation of the gas agreement constitutes an “existential threat”.   According to a researcher at the US Congressional Research Service in the Madison Building on Capitol Hill whose job includes keeping track of Israeli claims, it’s the 29th “existential threat” the Zionist colony has identified in its 64 year history.  These perceived existential threats range from the internationally recognized Right of Return for Palestinians ethnically cleansed from their homes during and  since the 1948 Nakba to various Palestinian groups; more than two dozen UN Resolutions including, 194 and 242; Hezbollah, naturally;  international solidarity movement projects; a Jewish academic or two; Iran for sure; the rise of  internet blogs; and potentially virtually every  Christian, Arab, and Muslim on the planet; not to mention the claimed rise of  global anti-Zionism which the US Zionist lobby has recently decreed was always just another form of virulent  anti-Semitism.

Despite all these  perceived “existential threats”, including recently the so-called “Road Map”, Israeli leaders continue to eschew any substantive negotiations which could mean Arabs and Jews sharing Palestine as part of one democratic, secular state on the basis of one person one vote, minus  any ‘chosen people’ lunacy.

Yuval Steinitz, Israel’s finance minister, warned that Egypt’s questioning its relations with Israel was “a dangerous precedent that threatens the peace agreements between Israel and Egypt.”

Ampal, the Israeli company which buys the gas, said that it considers the termination of the contract “unlawful and in bad faith”, and demanded its full restoration. Ampal is planning to use international arbitration to attempt redress and is sending a corporate delegation to Washington to meet with AIPAC and administration officials  to ask them to get the Egyptian action nullified and to force Egypt to keep selling its natural gas at below market prices.  One congressional staffer joked in an email that Israeli companies get way better constituent services out of Congress than American companies, or even the voters who elect its members.

Israeli political analyst Israel Hayom wrote last weekend: ““The painful conclusion from the collapse of the gas agreement with Egypt is that we are regressing to the days before the peace agreement with Egypt and the horizon does not look rosy at all. Camp David is in mortal danger. The painful conclusion is, once again, that we have no genuine friends in the region.  Certainly not for the long term.”

The ADL’s Abe Foxman lamented, “Israel gave Egypt a great deal in exchange for the Camp David peace agreement, much more than we should have. Among other things, a free trade zone, in which we veritably pushed for the establishment of sewing workshops and an Egyptian textile industry so that they would be able to easily export cheap cotton and other goods to the United States as well as to Israel. We made the Egyptians a respectable people in the eyes of the American public. And this is how we are repaid what they owe us?”

Never idle for long, AIPAC began circulating a draft resolution this week to its key Congressional operatives aimed at having the US Congress condemn the cancellation of the gas giveaway and demanding its immediate renewal under threat of the US terminating aid to Egypt. The lobby has also begun to squeeze the Obama administration, threating a cut off of  Jewish donors if nothing is done to convince Egypt “to get real” in the words of  ultra-Zionist Howard Berman, the ranking Democrat on the House Foreign Affairs Committee.

The political reality is that American diplomats, AIPAC, and Israeli officials, sometimes difficult to distinguish from one another, have been bracing for a breach in Egyptian-Israeli relations since last spring’s demonstration in Tahrir Square.  They rightly fear that Camp David and the Israeli embassy in Cairo will be next on the chopping block as the Egyptian people stand up.

Regarding the expected  closing of the Israeli embassy,  according to the daily Yedioth Ahronoth: “What we have at the moment is a swift deterioration in relations: Israelis can no longer set foot in Egypt, and the Egyptian consulate in Tel Aviv does not have a mandate to issue entry visas.  Anyone who insists on going to Egypt from Israel even with a foreign passport can expect to get into trouble.  His name could join the list of ‘spies’ and ‘Mossad agents’…. ”””…They don’t want us. It’s that simple and it is very dangerous now for Israelis to be in Egypt.”

According to Netanyahu spokesman Mark Regev, “There is also no one who will rent a building to the Israeli embassy in Cairo, for the small embassy staff headed by Ambassador Yaakov Amitai.  Due to security considerations, we have cut drastically their work week. The staff lands every Monday afternoon and leaves early Thursday.  Every time an address is found for the embassy (at an exorbitant price), the local security officials shoot down the deal.  As far as the Egyptians are concerned, the Israeli diplomats can stay in Jerusalem until their next president is elected and then we will see what happens.”