Opening the Other Eye: Charles Taylor and Selective Criminal Accountability 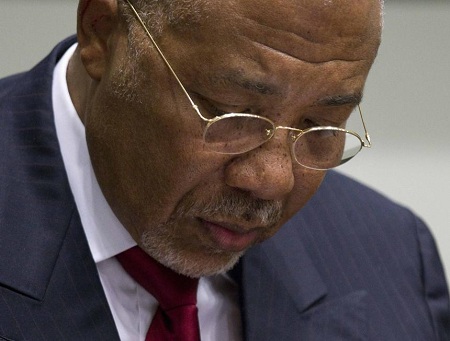 From all that we know Charles Taylor deserves to be held criminally accountable for his role in the atrocities committed in Sierra Leone during the period 1998-2002. Taylor was then President of Liberia, and did his best to encourage violent uprisings against the governments in neighboring countries so as to finance his own bloody schemes and extend his regional influence. It was in Sierra Leone that ‘blood diamonds,’ later more judiciously called ‘conflict diamonds’ were to be found in such abundance as to enter into the lucrative world trade, with many of these diamonds finding their way onto the shelves of such signature jewelry stores as Cartier, Bulgari, and Harry Winston, and thereby circumventing some rather weak international initiatives designed to prevent this outcome.

It is fine that Charles Taylor was convicted of 11 counts of aiding and abetting war crimes and crimes against humanity of the rebel militias that committed atrocities of an unspeakable nature, and he will be sentenced in early May. And it may impress some that liberal legal procedures led to Taylor’s acquittal with respect to the more serious charges of ‘command responsibility’ or ‘joint criminal enterprise.’ Surely the circumstantial evidence sufficiently implicated Taylor that it would have seemed reasonable to hold him criminally responsible for the acts performed, and not just for aiding and abetting their commission. In general, it is better not convict defendants involving crimes of state when clear evidence is not available to uphold specific charges beyond any reasonable doubt. In this respect, the Taylor conviction seems restrained, professional, and not vindictive.

But as Christine Cheng has shown in a perceptive article published online in Al Jazeera English there are some elements of this conviction that feed the suspicion that the West is up to its old tricks of seizing the high moral ground while pursuing economic and geopolitical goals that obstruct the political independence and sovereignty of countries that were once their colonies. The financing of the Special Court on Sierra Leone was almost totally handled by the United States, United Kingdom, the Netherlands, and Canada. In addition, there were reasons to believe that if Taylor were allowed to foment trouble from his base of operations in Liberia he would make it more difficult to restore stability, and begin ‘legitimate’ mining operations, which is what the West wanted for the region.

What is dramatically ironic about the whole picture is that the United States is the number one advocate of international criminal justice for others, while holding itself self-righteously aloof from accountability on the main ground that the process might be tainted by politicized motivations! The U.S. Congress has even threatened that it would use military force to rescue any Americans that were somehow called to account by the International Criminal Court in The Hague, and has signed agreements with over 100 governments not to hand over American citizens to the ICC. And yet it is American criminal lawyers and human rights NGOs that have been most loudly applauding the outcome in the Taylor case, and without even a whimper of acknowledgement that there may be some issues relating to double standards.

If aiding and abetting is what the evidence demonstrates, then should there not be at least discussion of whether the jewelry retailers making huge profits by selling these tainted diamonds should not have investigated, and even prosecuted? There was a voluntary, self-regulating process established, the Kimberly Process (2001) named after the city in South Africa where the meeting of concerned governments took place. A British NGO, Global Witness, reports that almost none of the prominent diamond retailers took any notice of this cooperative effort that was evidently designed to avoid a civil society backlash of the sort that animal rights activists organized to protest cruelty to animals. But isn’t interesting that Western corporations are asked to act in a morally responsible manner as a voluntary undertaking while political leaders of sovereign states are subject to the rigors of international criminal law?

These issues are kept out of the Western public discourse. Take the self-satisfied editorial appearing in the Financial Times (April 27, 2012). It starts with words affirming the larger meaning of Taylor’s conviction: “A strong message was sent to tyrants and warlords around the world yesterday. International law may be slow, but even those in the higher ranks of power can be held to account for atrocities committed against the innocent.” And the editorially ends even more triumphantly, and without bothering to notice the elephant standing in the middle of the room, that leaders “in states weak and strong—now know that there can be no impunity for national leaders when it comes to human rights.” Such language needs to be decoded to convey its real message as follows: “national leaders of non-Western countries should realize that if their operations henceforth stand in the way of geopolitical priorities, they will held criminal responsible for any wrongdoing on their part.”

(1) If non-Western leaders are supportive of Western interests, their atrocities will be overlooked, but if there is a direct confrontation, then the liberal establishment will be encouraged to start ‘war crimes talk’ (thus Milosevic, Saddam Hussein, Qaddafi (killed before proceedings initiated) were charged with crimes, while the crimes of those governing Bahrain, Saudi Arabia, and Israel[1] were ignored);

(2) The great majority of cases dealing with international crimes have been up to this point associated with sub-Saharan Africa, confirming the extent to which this region has been devastated by bitter conflicts, many of which are attributable to the remnants of colonialism (divide and rule; slave trade; arbitrary boundaries separating tribal and ethnic communities; continuing quest for valuable mineral resources by international business interests);

(3) The Western mind is trained so as not to notice, much less acknowledge, either the historical responsibility of the colonial powers or the unwillingness of the West to submit to the same accountability procedures that are being relied upon to impose criminal responsibility on those who stand in the way of Western demands.

The United States is particularly vulnerable from these perspectives. When we hear the names of Guantanamo Bay and Abu Ghraib the immediate association is with American war crimes. When American leaders openly endorse reliance on interrogation techniques that are generally condemned as ‘torture’ we should notice the gaping chasm separating ‘law’ from its consistent implementation. When a soldier, such as Bradley Manning, exposes the atrocities of the Iraq and Afghanistan wars he is held in humiliating prison circumstances and prosecuted for breaching secrecy, with suggestions that his intent was ‘treasonous,’ intended to help enemies. At least, if there was a measure of good faith in Washington, it should have been possible to move forward on parallel paths: hold Manning responsible for releasing classified materials, mitigated by his motives and absence of private gain, but vigorously repudiate and investigate the horrible crimes being committed against civilians in Iraq and Afghanistan, as well as the battlefield practices and training programs that give rise to such atrocities.

The Western powers have gone further in sculpting international law to their liking. They have excluded ‘aggressive war’ from the list of international crimes contained in the Rome Treaty that governs the scope of ICC jurisdiction. When the defendants were the losers in World War II, aggressive war was treated at Nuremberg (and Tokyo) as the supreme war crime as it was declared to encompass the others. The UN Charter was drafted to reflect this outlook by unconditionally prohibiting any recourse to force by a state except in self-defense narrowly defined as a response to a prior armed attack. But in the decades that followed each of the countries that sat in judgment at Nuremberg engaged in aggressive war and made non-defensive uses of force, and so the concept became too contested to be any longer codified as law. This reversal and regression exemplifies the Janus face of geopolitics when it comes to criminal accountability: when the application of international criminal law serves the cause of the powerful, it will be invoked, extended, celebrated, even institutionalized, but only so long as it is not turned against the powerful. One face of Janus is that of international justice and the rule of law, the other is one of stern look that submits to the rule of power on behalf of the war gods.

Where does this line of reasoning end? Should we be hypocrites and punish those whose crimes offend the geopolitical gatekeepers? Or should we insist that law to be law must be applied consistently? At least these questions should be asked, a certain humility emerge, especially among liberals in the West.

[1] Of course, Israel is only geographically non-Western, and its leadership enjoys the same kind of impunity available to American leaders and those of allied countries.