The Resolution Against Sri Lanka at the Human Rights Council: Did the U.S. Go Too Far?

In March, the U.N. Human Rights Council (UNHRC) passed a United States-sponsored resolution pressing the Sri Lankan government to investigate alleged human rights violations during the final stages of the war with the terrorist group Liberation Tigers of Tamil Eelam (LTTE). Secretary of State Hillary Clinton said in a statement immediately after, “the United States and the international community had sent a strong signal that Sri Lanka will only achieve lasting peace through real reconciliation and accountability.”

Sri Lanka, which rescued 300,000 hostages held by the LTTE as a human shield, by defeating the terrorist group, has continued to protest at the allegations of human rights violations. Special envoy on human rights, Mahinda Samarasinghe, condemned the resolution as “misconceived, unwarranted and ill-timed”, and potentially harmful to the progress being made within the country.

The LTTE, in its brutal reign of three decades killed an estimated 100,000 and brought ruin to the once resilient economy.  Western governments warned President Mahinda Rajapaksa not to even attempt to fight the invincible terrorist group, which had mastered the use of female suicide bombers to cause widespread damage. But following a four-year grueling war, the LTTE was defeated in May 2009. It was the first time in recent history that a terrorist group had been so comprehensively beaten by a government. But not a single western government moved to congratulate Sri Lanka for the unparalleled feat.

As one Indian commentator noted

If such an outcome were to be secured in Iraq or Afghanistan or even in Pakistan, it would be embraced by the West as an unadulterated and righteous triumph. In Sri Lanka, however, it appears to have provoked … a seething and barely concealed outrage.… There is a sense, not of a dreaded terrorist organization having been defeated and destroyed, but of collaborators, comrades, and fellows at arms, lost to the enemy.[1]

The U.S. position seems ironic since it provided considerable help for the government to defeat the terrorists. The U.S. was one of the first countries to ban the LTTE and the FBI described it as the world’s deadliest extremist organization surpassing Al Qaeda or HAMAS. Many Tamils convicted for attempting to buy sophisticated arms and equipment in the US are currently languishing in jails mostly as a result of FBI sting operations.

Following the United States, the European Union and India, as well as a number of other countries, had proscribed the LTTE. Some of these governments, especially the U.S. and the U.K., also provided arms and intelligence to help crush the group.

And with the end of the war, Sri Lanka has achieved comprehensive peace. Few countries in the world have been able to restore normalcy with such speed following a long drawn out war. In under three years, almost all the 300,000 internally displaced people have returned to their own homes. Even more impressive is that 90 percent of LTTE cadres who had surrendered (10,490 of the 11,700) have been freed and reunited with their families.

Alongside these remarkable achievements, tourists who shunned the country for decades have been flocking back. This follows the New York Times and a number of travel magazines identifying Sri Lanka as a top tourist destination after the war. The Sri Lankan economy last year recorded the highest ever growth rate of 8.3 percent. Tamils in the northern province who had been herded around as hostages by the LTTE have at last settled back in their own homes. Economic growth of the northern region last year was a massive 22 percent. It is clear that Sri Lanka, and the Tamils in particular, are working to leave the past behind and move on. In that background it is not surprising that they saw the UNHRC resolution as a hindrance, not a help.

Besides all these, Sri Lanka is a functioning democracy friendly towards the West.

Why then did the United States sponsor the Human Rights Council resolution against a friendly nation?

Perhaps it was a genuine concern for protection of human rights. The mounting number of casualties suggested by various human rights groups and media outlets and the screening of a documentary by U.K.’s Channel 4 were capable of stirring emotions in any unsuspecting listener.

The genesis of the casualty figures from the war is fascinating.  The U.N. Under-Secretary-General responsible for humanitarian operations at the time the war ended, Sir John Holmes, had used for internal purposes 7,000, a number the TamilNet had quoted. The LTTE mouthpiece ‘Tamil Net’, published in Norway, had consistently carried exaggerated reports and doctored photos of war casualties. Holmes underlined that it was an “estimate based on the best evidence that we had, but that wasn’t very good evidence because we weren’t really present in the (battle zone) in any systematic way. That’s why we didn’t publish them.”

In spite of that, a few days later the London Times reported that evidence gathered by it has revealed that at least 20,000 Tamils were killed.  The paper blamed the U.N. for underestimating the death toll.

What is intriguing is the way the Times arrived at that figure. The paper gave different bases for its calculation. One version was that the U.N. had assessed the number of those who died by the end of April at around 7,000, and the paper extrapolated it using the rate of 1,000 a day for May until the 19th when the war ended. Later the Times claimed that it had extrapolated the number of dead bodies by four. The rationale for using either option was not explained.

The rest of the media world was aghast at the claim of the Times. The Guardian and the BBC questioned the methodology. The New York Times reported that a coordinator for U.N. humanitarian relief, Elizabeth Byrs, had told that any estimate of the death toll must be based on extrapolation and guesswork. They were puzzled by the methodology used. “Someone has made an imaginative leap and that is at odds with what we have been saying before,” one official said. “It is a very dangerous thing to do to start making extrapolations.”

But the story did not end there. Stakes were raised again, this time by an ex-employee of the U.N. in its Colombo office, Gordon Weiss, who told ABC that the death toll could be ‘between 15,000 to 40,000’ according to his sources. He has not so far divulged these ‘sources’. The unsound nature of the estimate was evident when he admitted at the launch of his book on the war that that number was ‘far too high’.

But in spite of the caveats, protests, disagreements and denials, and the absence of a sound basis, the upper end of Weiss’ estimate gained currency. The Darusman report to U.N. Secretary General Ban Ki Moon endorsed the figure noting “there is still no reliable figure for civilian deaths, but multiple sources of information indicate that a range of up to 40,000 civilian deaths cannot be ruled out at this stage”.

The Darusman committee did not undertake its own research but went by the ‘number of sources that quoted the figure’.  In other words it had become a victim (and a promoter) of Goebbels theory that if you keep repeating a lie people will eventually come to believe it.

The manner in which “multiple sources for the information” that formed the basis of the Darusman report were mustered should have alerted the media to their questionable authenticity. By the deadline of 15 December 2010, the response to the committee’s invitation for submissions was so poor that it had to extend it by two weeks. It was then that the anti-Sri Lankan lobby got into action urging the Tamil Diaspora to make representations to pressure the U.N. to hold an enquiry against GOSL, even if they hadn’t been directly affected by the conflict and atrocities. To make it easy, two dozen sample letters to be sent online to the Panel of Experts were presented in three different websites. To make it even easier, to hide their identities, organizers extracted an undertaking from the U.N. which denied access to material in the Expert Panel’s possession for a period of 20 years. Even after the lapse of the 20-year-ban, the Office of Legal Affairs (OLA) has assured the Committee, that it could give an undertaking to its sources of absolute confidentiality in the subsequent use of information.[2]

Sri Lanka has criticized the report based on unsubstantiated, third-hand sources with the 20 year embargo which prevents anyone from checking the authenticity of the information. There is no data even on how many of the complainants were in fact in the warzone during the period. In spite of the contrived nature of the “evidence” the media has latched on to the report as the source of 40,000 deaths. The Darusman report negated its own conclusions by noting later that, “This account should not be taken as proven facts, and any effort to determine specific liabilities would require a higher threshold”. But when its numbers were used by the media, such qualifications were conveniently lost in transition.

The British Channel 4 produced a video ‘Sri Lanka killing fields’ to buttress these claims. Sri Lanka continued to object to these claims and produced its own documentary ‘Lies Agreed Upon’ which questioned the authenticity of the Channel 4 presentation. Much of the Channel 4 material had been drawn from the LTTE mouthpiece TamilNet that routinely published exaggerations to drum up western help and sustain Diaspora support. One of its outrageous claims was when it produced a photo of its leader Prabhakaran reading a copy of the newspaper which carried the news of his demise, two days after his death, claiming he was alive and well.

Critics also have questioned how the armed forces could have got rid of 40,000 bodies in such a short time in a 5 kilometers sliver of land without leaving a trace and without being seen via satellites. 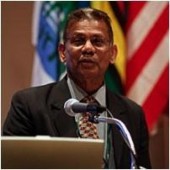 Don Wijewardana is an economist, author and a freelance journalist. He can be contacted at [email protected]