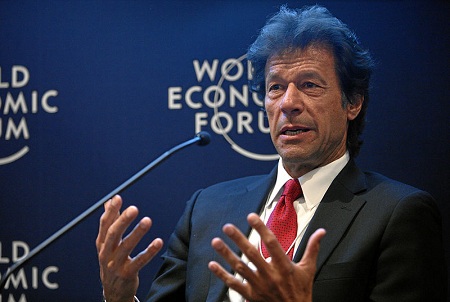 After a long delay, Imran Khan’s strategy began to pay off. As Pakistan escalated the war against its own people in two of its four provinces, as Pakistani capital fled and foreign capital shunned the country, as the economy worsened, as poverty deepened, as political factions in Karachi engaged in bloody turf battles, as power outages persisted, as supply of cooking gas become intermittent, the anger and desperation of Pakistanis also grew. Who could lift Pakistan from this descent into chaos? Pakistanis knew better than to expect a savior to emerge from the military or the established political classes: for they had produced the mayhem and were its chief beneficiaries. In this gloom, Imran Khan beckoned to Pakistanis. His calls for justice grew louder, his jeremiads against corrupt politicians became sharper, his critique of the generals became unsparing. Slowly, his message began to resonate with Pakistani youth and the urban middle classes in Pakistan. Starting in mid-2011, the polls signaled a surge in his popularity.

On October 30 2011, Imran Khan was ready to take a measure of his popularity with a rally in Lahore. The rally was a great success; more than two hundred thousand people showed up. Most people agreed that nothing like this had been seen since the days of the charismatic Zulfikar Ali Bhutto in the 1970s. On December 25, the Tehreek organized a second rally in Karachi, the stronghold of a local ethnic party, with the same results. Finally, some sixteen years after his entry into politics, people were beginning to rally around Imran Khan and his party. This surge in his popularity suddenly changed the political map of Pakistan. It also produced some unwelcome results; now that his prospects looked brighter, some members of the established political class began to knock on the Tehreek’s door. Imran Khan was now a political force; after wandering for many years on the margins, he had arrived with a bang on Pakistan’s political scene.

Imran Khan offered a more optimistic assessment of his prospects. He described the surge in his popularity as a political tsunami that would in time sweep out the old corrupt order. Was this a case of excessive self-congratulation? This would depend on whether the Tehreek could sustain the momentum it had generated, whether it could capitalize on this surge to build a grassroots organization, whether it could expand its program to incorporate the interests of workers and peasants, and whether it could create an intellectual cadre that would disseminate its message through print, television and the internet. Can Imran Khan energize the people, raise their hopes of change to a fever pitch, so that attempts to defeat them by extra-legal means could backfire and persuade the Tehreek to lead an uprising? I will return to these questions; but first, I wish to turn to the increasingly shrill and frenzied attacks against Imran Khan by Pakistan’s putative liberal and left-leaning intelligentsia; these attacks are most visible in the English-language print media. Their shrill commentary suggests that they are beginning to take him seriously.

Pakistan’s ‘liberal’ and ‘left-leaning’ groups bring three related charges against Imran Khan: he is an Islamist (or fundamentalist), a partisan of the Taliban, and a rightist. They rely on less than half-truths in making their case.

Imran Khan is certainly Islamic in his thinking, inspiration and identity but he is not an Islamist, a term that generally applies to Muslims who subscribe to a literalist interpretation of the Qur’an and the Traditions of the Prophet. Unlike many Pakistanis who identify themselves as liberals or leftists – and take a Kemalist view of Islam as a backward religion that must be rigorously excluded from the public discourse and even public space – Imran Khan derives his identity from Islam and seeks inspiration in the Qur’an and the Traditions. In regards to the relevance of some of the legal aspects of the Qur’an, together with Allama Iqbal and Fazlur Rahman (for many years, a professor of Islamic Studies at University of Chicago), he recognizes the need for revisiting some of the rulings that were given currency by the consensus of a previous age. In this sense, it would be appropriate to describe Imran Khan as an Islamic modernist; but unlike most Islamic modernists he also feels a strong affinity for the sufi tradition of Islam that has emphasized the spirit and inward content religion without neglecting its outward practice. In both respects, I doubt if there are Islamists who would admit Imran Khan into their inner circles.

Is Imran Khan then a partisan of the Taliban? The United States has used its hegemonic control over mainstream global discourse – especially since launching its global military offensive under the cover of the Global War Against Terror – to smear all freedom fighters it does not support as terrorists. The discourse on terrorism is very cleverly designed to focus the world’s attention on the relatively insignificant acts of violence by oppressed peoples and thereby legitimize the massive acts of violence perpetrated by Western nations against the rest of the world. In American demonology, anyone fighting against the US occupation of Afghanistan is a terrorist – whether he is Afghan or Pakistani. Most ‘liberal’ and ‘left’ writers in Pakistan have internalized this American rhetoric; it follows that the Afghans and Pakistanis fighting the US occupation do not have a legitimate cause regardless of what fighting tactics they employ. In describing Imran Khan as Taliban sympathizer, then, these writers hope to smear him as a terrorist-sympathizer. This smear will not stick. Most Pakistanis recognize that Imran Khan supports the right of Afghans to rid their country of US occupation; other than that and his ethnic kinship with the Pashtuns, there can exist little affinity between him and the Afghan Taliban.

It is time now to explain the scare quotes surrounding the political labels left, right and liberal. In much of the Islamicate, politics has moved into strangely dubious territory, where these labels retain very little of their original meaning. As the liberal or left-oriented political elites in much of the Islamicate began to lose their legitimacy starting the 1970s – because of their dismal failure to create free, sovereign and prosperous polities – and faced growing opposition from various Islamist movements, they chose to sacrifice their ideology in order to cling to power. They had risen to power on an anti-imperialist, anti-Zionist and, in some cases, socialist platform. Starting in the 1970s, the survival of the increasingly repressive regimes they led was tied to the support of Western powers in return for keeping the Islamists out of power; this was the pact they made with the devil. It was an enduring pact that crushed any opposition to these regimes until the recent Arab uprising. The liberal and left factions in Pakistan also reprogrammed themselves after the end of the Cold War. Under Benazir Bhutto, the Pakistan People’s Party, once left-leaning, anti-imperialist, sought legitimacy in Washington and quickly embraced its neoliberal program to open the economy to Western capital.

If the formerly liberal and left leaning forces completed this metamorphosis with little difficulty, this is not entirely surprising. Even when they proclaimed socialist ideals or employed anti-imperialist rhetoric, the thinking of the politically dominant classes in much of the Islamicate had been shaped by an Orientalist narrative. After the Western powers had destroyed or marginalized the traditional learned classes – judges and jurisprudents trained in Shariah, theologians, physicians, engineers, architects and artists – this created space for the emergence of new intellectual classes that were beholden to their colonial masters. More often than not, they were secular and nationalist in their politics, and, following their Orientalist mentors, they blamed Islam for their backwardness; as a result, even when they paid lip service to Islam, they were determined to exclude it from their political discourse. In keeping with their colonialist thinking, they affected Western styles and mannerisms but did little to acquire the institutions, sciences and technology that were the motors of Western power and prosperity. It is no exaggeration to assert that these new elites – despite their nationalist rhetoric – felt closer to their colonial masters they had replaced than to the people they claimed to lead.

In consequence, as Islamist opposition movements began to reject their claims to leadership, the failed political elites retreated into the arms of their former colonial masters. They sought to convince the Western world that they faced a common enemy; the Islamist parties eager to replace them would turn the clock back on human rights, women’s rights and the rights of minorities. Worse, should the Islamist opposition gain power they would pursue policies openly hostile to Western interests. Despite the about-turn in their policies, however, these elites continued to sport their old political labels. They were ‘nationalists’ but owed their survival to Western arms, money, diplomatic support, intelligence, and advice. They were ‘liberals’ but they were happy to use the police state to suppress opposition to their regimes. They were ‘socialists’ but eagerly embraced the neoliberal dictates of the IMF and the World Bank.

In Pakistan, different factions of the ruling elites – who variously claim to be ‘nationalists,’ ‘liberals’ or ‘leftists’ – strenuously lobby the Americans or the British to gain power or to keep it. They outbid each other in sacrificing vital national interests; they never tire of proclaiming that the nation’s economic salvation depends on attracting foreign investment; they have backed unconditionally America’s so-called war on terrorism; they oppose the Afghans’ right to free their country of foreign occupiers; they cheered when General Musharraf used Pakistan’s military to fight Pakistanis who aided the Afghans; they privately assure the Americans that – despite their public stance – they stand firmly behind the deadly drone strikes against ‘targets’ inside Pakistan. Disregarding Pakistan’s Islamic sensibilities, a tiny minority of ‘secularists’ in Pakistan want to impose Western sexual mores on Pakistan; they have campaigned to abrogate the nation’s laws against blasphemy, not prevent its abuse or mitigate its penalties; they refuse to defend the rights of Muslim minorities in Western countries; they support America’s demands to shut down the madrasas in Pakistan but have long supported a colonial system of education for the elites that uses syllabi and exams designed in Cambridge.

Indeed, recently, one columnist at Dawn – a leading English newspaper – lampooned Imran Khan for refusing to share the podium with Salman Rushdi at a literary event in India. I do not know what inner demons drove Rushdi to produce his obscene caricature of Islam, but it does seem odd that a writer – that any person with imagination – would seek to sully and shatter a sacred treasure of humanity only because he finds himself excluded from its deep mystery. Needless to say, I did not support Ayatollah Khomenei’s call for Rushdi’s assassination; nor do I support the death penalty for apostasy. Islam supports free choice in matters of conscience, but the state may limit the activities of well-funded foreign missionaries that use pecuniary inducements to gain converts.