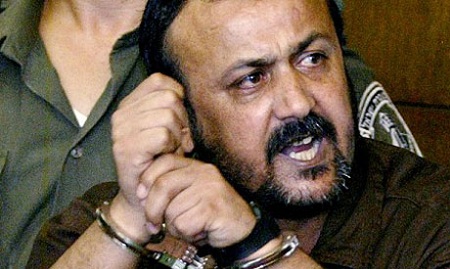 Last week, Marwan Barghouti, the prominent Palestinian political prisoner and Fatah leader, called on Palestinians to launch a “large-scale popular resistance” which would “serve the cause of our people.”

The message was widely disseminated as it coincided with Land Day, an event that has unified Palestinians since March 1976. Its meaning has morphed through the years to represent the collective grievances shared by most Palestinians, including dispossession from their land as a result of Israeli occupation.

Barghouti is also a unifying figure among Palestinians. Even at the height of the Hamas-Fatah clashes in 2007, he insisted on unity and shunned factionalism. It is no secret that Barghouti is still a very popular figure in Fatah, to the displeasure of various Fatah leaders, not least Mahmoud Abbas, who heads both the Palestinian Authority and Fatah. Throughout its indirect prisoner exchange talks with Israel, Hamas insisted on Barghouti’s release. Israel, which had officially charged and imprisoned Barghouti in 2004 for five alleged counts of murder—but more likely because of his leading role in the Second Palestinian Intifada—insisted otherwise.

Israel held onto Barghouti largely because of his broad appeal among Palestinians. In late 2009, he told Milan-based Corriere Della Sera that “the main issue topping his agenda currently is achieving unity between rival Palestinian factions” (as quoted in Haaretz, November 25, 2009). More, he claimed that following a unity deal he would be ready to submit candidacy for Palestinian presidency. Barghouti is, of course, still in prison. Although a unity deal has been signed, it is yet to be actualized.

Barghouti’s latest statement is clearly targeting the political class that has ruled Palestinians for many years, and is now merely managing and profiting from the occupation. “Stop marketing the illusion that there is a possibility of ending the occupation and achieving a state through negotiations after this vision has failed miserably,” he said. “It is the Palestinian people’s right to oppose the occupation in all means, and the resistance must be focused on the 1967 territories” (BBC, March 27).

Last December, Jospeh Dana wrote, “Barghouti is a figure of towering reverence among Palestinians and even some Israelis, regardless of political persuasion.” However, he did not earn his legitimacy among Palestinians through his prophetic political views or negotiation skills. In fact, he was among the Fatah leaders who hopelessly, although genuinely pursued peace through the ‘peace process’—which proved costly, if not lethal, to the Palestinian national movement. Dana wrote, “Barghouti’s pragmatic approach to peace during the 1990s demonstrated his overarching desire to end Israeli occupation at all costs” (The National, Dec 23, 2011).

Although his latest message has articulated a conclusion that became obvious to most Palestinians—for example, that “it must be understood that there is no partner for peace in Israel when the settlements have doubled”—Barghouti’s call delineates a level of political maturity that is unlikely to go down well, whether in Ramallah or Tel Aviv.

So it’s not his political savvy per se that made him popular among Palestinians, but the fact that he stands as the antithesis of traditional Fatah and PA leadership. Starting his political career at the age of 15, before being imprisoned and deported to Jordan in his early 20s, Barghouti was viewed among Fatah youth—the Shabibah—as the desired new face of the movement. When he realized that the ‘peace process’ was a sham, intended to win time for Israeli land confiscation and settlements and reward a few accommodating Palestinians, Barghouti broke away from the Fatah echelons. Predictably, it was also then, in 2001, that Israel tried to assassinate him.

Marwan Barghouti still has some support in Israel itself, specifically among the politically sensible who understand that Netanyahu’s rightwing government cannot reach a peaceful resolution, and that the so-called two-state solution is all but dead. In a Haaretz editorial entitled ‘Listen to Marwan Barghouti,’ the authors discussed how  “back when he was a peace-loving, popular leader who had not yet turned to violence, Barghouti made the rounds of Israeli politicians, opinion-makers and the central committees of the Zionist parties and urged them to reach an agreement with the Palestinians.” The authors recommended that ‘Jerusalem’ listen to Barghouti because he “is the most authentic leader Fatah has produced and he can lead his people to an agreement” (March 30).

In his article entitled ‘The New Mandela’, Uri Avnery wrote that Barghouti “is one of the very few personalities around whom all Palestinians, Fatah as well as Hamas, can unite” (Counterpunch, March 30). However, it is essential that a conscious separation is made between how Barghouti is interpreted by the Palestinians themselves and Israelis (even those in the left). Among the latter, Barghouti is presented as a figure who might have been involved in the “murderous terror” of the second Intifada (Haaretz) but who can also “lead his people to an agreement”—as if Palestinians are reckless multitudes desperate for their own Mandela who is capable, through his natural leadership skills, of uniting them into signing another document.

For years, but especially after the Oslo peace process, successive Israeli governments and officials have insisted that there was “no one to talk to on the Palestinian side.” The tired assertion was meant to justify Israel’s unilateral policies, including settlement construction. However, Barghouti is a treasured leader in the eyes of many Palestinians not because he is the man that Israel can talk to, and not because of any stereotypical undertones of him being a ‘strong man’ who can lead the unruly Arabs. Nor can his popularity be attributed to his political savvy or the prominence of his family.

Throughout the years, hundreds of Palestinians have been targeted in extrajudicial assassinations; hundreds were deported and thousands continued to be imprisoned. Marwan Barghouti is a representation of all of them and more, and it’s because of this legacy that his messages matters, and greatly so. In his latest message, Barghouti said that the Palestinian Authority should immediately halt “all co-ordination with Israel—economic and security—and work toward Palestinian reconciliation,” rather than another peace agreement.