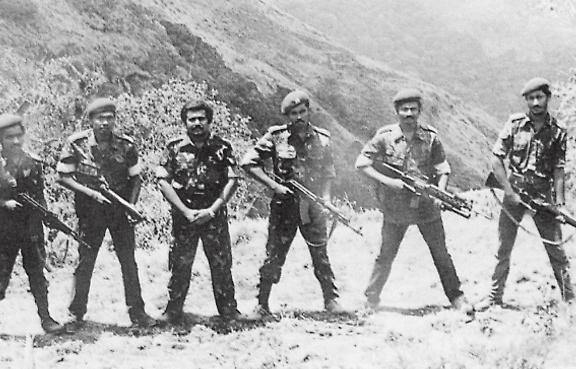 From Sri Lanka to Syria, the inaction of the world community resulted in loss of precious lives

Riding the tiger is an art that isn’t easy to master in the best of circumstances. While a tiger’s back may be the safest place to be when you are riding it, you should be ready for what comes when the ride inevitably ends. 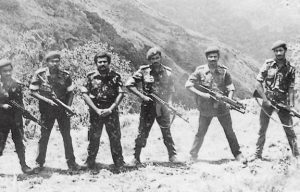 LTTE leaders at Sirumalai camp, India in 1984 while they are being trained by RAW. (Photo and caption: Wikipedia)

There was a time when many in India, including the Tamil, identified with Tamil Tigers with the establishment and Indian agencies offering every possible support to “our boys.” The LTTE training camps in Tamil Nadu were a secret that no one bothered to hide.

This support proved crucial in the Tigers’ transformation into one of the deadliest and successful insurgent forces in recent history. Their breathtaking exploits on land and on high seas over an organized army became the stuff of legends. Many a Tamil filmmaker modeled his potbellied heroes on LTTE chief Prabhakaran.

More important, LTTE managed to get its goal of a separate homeland for the Tamils.  It didn’t stop there. Sri Lanka was turned into a living hell with daredevil assassinations and suicide bombings – LTTE practically invented it – targeting top Lankan leadership, security forces, and ordinary people for nearly two decades.

Ironically, India had a price to pay, too. Former premier Rajiv Gandhi lost his life for his apparent sincerity in trying to end the interminable cycle of violence in the island. Dispatching Indian forces to Sri Lanka, however, proved a spectacular disaster with the country losing 1,155 soldiers to the ragtag army trained on Indian soil – a figure that outweighs the toll in wars with Pakistan.

The civil war claimed more than 100,000 lives, including 28,000 LTTE cadres and 23,330 Lankan troops, not to mention the economic costs of the long conflict in a country dependent on tourism.

Prabhakaran was notorious for his murderous ruthlessness and cruelty, which was experienced not just by Sinhalas and Muslims, but also by fellow Tamils.  While the Tamil revolt had been a response to long years of dispossession, its methods to get justice were far from just.

Yet nothing justifies the appalling savagery and all-out war that was launched against the entire Tamil population in the name of fighting Tigers’ terror.   Independent estimates suggest more than 40,000 Tamils were killed and hundreds of thousands were driven from their homes in the long and bloody campaign.

Prabhakaran, who loved to pose in his military fatigues, was eventually captured and killed and paraded like a prized trophy.  And it now turns out they didn’t even spare his 12 year-old-son Balachandran. A recent documentary on UK’s Channel 4 showed the bullet-riddled, naked body of a young boy identified as Prabhakaran’s son.  There were five bullet holes in the young torso, fired point blank.  The image of the boy sleeping the eternal sleep is incredibly moving and disturbing. What was his crime except being Prabhakaran’s son?

Last year, the Channel 4 created a storm with its first documentary detailing the extent and epic proportions of crimes against humanity committed by both sides. This month, it followed up with more horrifying documentary evidence of war crimes and state sanctioned abuse and terror.

Of course, Prabhakaran routinely visited such savagery on his victims.  But is there no difference between a group of desperate militants and organized army representing a nation governed by laws and international conventions?

The Sri Lankans had heaved a collective sigh of relief when the island nation was rid of three decades of Tiger terror three years ago.  My Lankan friends say today there’s total peace and security in the country and tourists are returning in big numbers. But at what price comes peace and security? Are there no laws and no fair rules of engagement as nations tackle terror and insurgency?

These questions demand answers from the world community and Lankan leadership. The UN Human Rights Council resolution last week was therefore the right thing to do and a belated recognition of the horrific crimes committed in the picture perfect island.  And one is proud that India added its voice, albeit at gunpoint by the DMK, to the global chorus against the Lankan war crimes.

But what cruel irony that the UN resolution was moved by a country which has repeatedly blocked all attempts to confront Israel on its seven decades of crimes against the Palestinians!  Besides, try as you might, it’s a tad difficult to look beyond the shock and awe of Iraq and Afghanistan and take lectures in human rights from folks responsible for Abu Ghraib, Guantanamo Bay, and the continuing drone strikes at faceless targets in distant lands. A million people paid with their lives for a lie in Iraq. But, of course, you can’t expect the world body to ever take on the empire.

Besides, the eternal proxy battlefield that the UN is, there’s more to the UNHCR vote than meets the eye. Washington hasn’t been too pleased with the growing Lankan proximity to Beijing and massive Chinese investment and influence in the neighborhood.  This is precisely why India wasn’t too keen on the UNHCR vote fearing it would force Lanka into the welcoming Chinese arms.

Indian foreign policy establishment and ever-vigilant media warriors also obsessed over the UN vote opening the door to similar calls on Kashmir. Tellingly, Pakistan and many of India’s neighbors voted against the Lanka vote because of their close ties to Colombo.  As they say, one man’s terrorist is another man’s freedom fighter and vice versa.

But regardless of all the cynical politics and diplomatic shadowboxing over this issue, it’s a shame if appalling crimes like these go unaccounted for. Desperate people resort to desperate measures.  The Tamils took to arms only when they had had enough of persecution and injustice at the hands of the Sinhala majority.

While injustice anywhere is a threat to justice everywhere, as Martin Luther King would insist, it’s all the more unacceptable when the dispossessed groups and vulnerable minorities are at the receiving end.  There comes a time when in the life of a nation as well as individuals, you have to rise above your narrow national interests and petty tribal loyalties to speak the truth, and more important, show which side you are on with your actions; especially when silence and inaction could endanger precious lives.

We have seen it happen repeatedly in the case of Palestinians over the past seven decades.  Armed with the US-issued license, Israel has killed and killed with impunity, incarcerating and torturing a whole nation.  And these are the folks who claim to have suffered the same fate not long ago.

In recent times, international inaction cost nearly a million lives in Rwanda.  Tens of thousands perished in the Balkans.  Ten years ago, more than 2,000 people were butchered and burnt and women raped in Gujarat for three months while the moderate, peace-loving prime minister in Delhi wrote poetry.

Thousands have been done to death in Syria and are still getting killed right now at the hands of their government because of the silence and overriding geopolitical interests of some world powers.

While the past has passed and perhaps there’s little anyone can do about it, it’s a disgrace if in today’s globalized, interconnected times the world with its fine institutions stands and stares while governments and despots kill people in the name of peace and security.  Every time we remain silent and shut our eyes and ears, we send innocents to their death. Silence kills. Literally.