US Ambassador Feltman Pledges No Interference in Lebanon; then Pledges to Defeat Hezbollah in Parliamentary Campaign 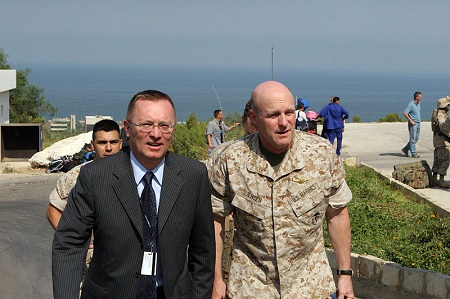 BEIRUT — One fellow who works at the Beirut US Embassy tells the story of how, each year around the time of the vernal equinox, since 2005, when Jeffrey Feltman became the American Ambassador—(given Jeff’s domination of US Middle East Policy, he is still essentially US Ambassador to Lebanon, Syria, Israel, Saudi Arabia, Iraq, Jordan, Egypt, the Gulf, and much of the region, although other names appear from time to time on the local US Embassy doorplates)—the now multi-hatted US Assistant Secretary of State for Near Eastern Affairs would perform a sort of ritual.

Reportedly, Jeff’s, early spring habit was to study himself while clad only in his underwear, in front of the full length Embassy mirror. Sometimes he would shake his head slightly and mutter something that sounded to his security guard like, “Jesus!” His Excellency would then vow to his staff to get into shape for summer by losing his inflating paunch which he understandably enough acquired over the winter from all that rich food and fine drink served at various diplomatic receptions as well as well as wolfing down one of his favorite foods, pizza, late at night. Jeff’s self-improvement commitment is admirable and worthy of emulation by a whole lot of us, especially in this land of Shawarma, Akras kibbi maklieh (Fried Kibbi Balls) Kafta Mishwi (Grilled Kabab Fingers), Kafta Mikli (Fried Kabab Fingers) Baked potatoes with Lebanese-style Beef filling, various kinds of Minoushe, not to overlook vast plates of Mezza and homemade Lebanese fries from Bekaa valley potatoes-just for starters.

Yet some political observers have noticed that dieting can make Jeffrey a little cranky at times. So perhaps we should not be shocked last Monday at a reception at the U.S. Capitol’s Cannon Office Building, Feltman, appearing before a gathering of the right wing pro-Israel-Saudi “Lebanese American Organization”, was undiplomatically aggressive. In fact, Jeff unloaded vitriol on Hezbollah, Syria, Iran, and anyone who even looked like they might support Resistance to US-Israel Middle East hegemony. During his remarks, Jeff did not fail to repeat his trademark mantra of “no US interference in the internal affairs of Lebanon and full American government respect for the country’s independence, sovereignty and right to run their own affairs.”

Then he instructed Lebanese voters, in no uncertain terms, what he expected of them: “The Lebanese people must join together to tell Hezbollah and its allies that the Lebanese state will no longer be hijacked for an Iranian-Syrian agenda.”

Jeff called on Lebanese voters to organize immediately for the coming election and “to once again show the world how they can transcend fear and use the 2013 parliamentary elections to defeat the remnants of the Syrian occupation, the pillar of which is Hezbollah, and reject the apologists of Syrian President Bashar al-Assad’s butchery.”

Feltman continued: “I hope those Lebanese who are here with me today, along with millions of others back home in Lebanon, will work to defeat Hezbollah and again show the world how they can transcend fear—in order to use the 2013 legislative elections to defeat the remnants of the Syrian occupation and reject these apologists of Assad’s butchery.” Jeff also addressed the Syrian situation, saying “no one outside of Syria has more of a stake in the correct outcome than the Lebanese.”

Feltman, identified to the 7thanniversary of the “Cedar Revolution” (which his office named) gathering, two elements that he claimed were constant across the board in the Arab Spring countries: “Yearning for dignity and a triumph over fear.” He omitted any reference to the yearning to overcome rising poverty, corruption, lack of jobs, and government neglect; as well as the repression of religious and ethnic minorities that continue to fuel the uprisings against US supported regimes, four of which have collapsed, while four others are still teetering. One observer thought his “triumph over fear” language was a call for citizens to risk their lives and to take to the streets.

Jeff’s pep rally for the coming Lebanese Parliamentary elections, which will help determine the next Lebanese government, which will affect US plans for the region, has set the tone and scaffolding for his team’s soon to be announced electoral platform. Organizing the campaign for the pro-US-Israel Saudi team will likely once again be supported by staffers at US Embassy Beirut and also worked on by Jeff’s State Department Bureau.

In support of Feltman’s 2013 Lebanese Parliamentary election launch, the Arabphobic and anti-Muslim Republican chairman of the House Homeland Security Committee, Peter King, used another one of his “warn America” hearings this week (3/22/12) in which he said something Feltman may have wanted to but diplomatically did not. King declared that “the Iranian-backed and funded militant group Hezbollah has hundreds of operatives based in the United States waiting orders to strike” and he added that “Hezbollah, and not al-Qaida, poses the greatest terrorist threat to all Americans”.

Feltman’s team knows well that if it is to succeed in toppling the current Hezbollah led government it must sow serious Sunni-Shia discord and the sooner the better. The campaign to defeat Hezbollah in next year’s Parliamentary elections will bombard Lebanon’s the Sunni Muslim and Christian community with the old bromide warnings of grave dangers that Shia Muslims pose in Lebanon. This, despite efforts by Hezbollah to allay sectarian fears of its intentions and the fact that the party still has strong multi sectarian partners including close to a majority of the Christian community. Hezbollah has earned the respect and partnership of many Christians by working for and sharing common goals on a variety of social and political issues.

Some Sunni supporters of Hezbollah, and there are many across Lebanon who support its domestic programs and Resistance stances, are urging the Party to preempt the Feltman team’s plans to divide Lebanon’s Muslim and to take a courageous and bold political initiative in Parliament that would reach out to the Sunni community and the international human rights movement and give heightened credence to Hezbollah moral and religious beliefs that demand human dignity for all currently in Lebanon.

That action would be to immediately enact in Parliament the right to work and temporary home ownership laws (pending their Return to Palestine at the first opportunity) for the Palestinians refugees in Lebanon, 95% of whom are Sunni Muslims. Every Sunni in Lebanon knows this is the right thing to do as does everyone else in Lebanon and beyond who know about the legalized discrimination against Palestinian refugees in Lebanon.

Were Hezbollah to undertake this historic and courageous act, which it currently has the political power to do, Hezbollah would earn for itself among the Sunni community vital additional respect.

Hezbollah would also thereby help thwart the U.S.-Israel effort to reset Middle Eastern politics in terms of a serious Sunni-Shi’ite schism while quite likely defeating Washington-Tel Aviv plans for next year’s Parliamentary elections. Those plans, as Jeffrey Feltman made clear this week, are to install their own team in the Grand Serail that may well determine the course of regional and Lebanese politics for years to come.