War With Iran: Will They or Won’t They? 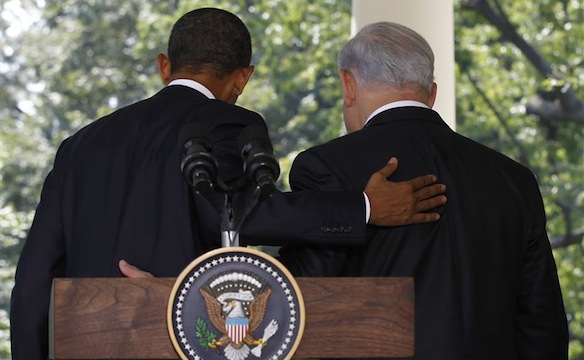 What’s the Obama Administration’s latest position on the possibility of an attack on Iran? It seems to be in flux.

Defense Secretary Leon Panetta says there is a “strong possibility” that Israel will attack Iran in either April, May, or June, according to the Washington Post earlier this month. The purpose would be to destroy Iran’s alleged building of a nuclear weapon.

The Tehran government vociferously denies it is constructing such a weapon, and can provide strong support for its position from persuasive American sources.

An Israeli pre-emptive attack on Iran’s nuclear sites could draw the U.S. into a new Middle East conflict, a prospect dreaded by a war-weary Pentagon wary of new entanglements.

That could mean pressing into service the top tier of American firepower — warplanes, warships, special operations forces and possibly airborne infantry — with unpredictable outcomes in one of the world’s most volatile regions.

The U.S. and Israel are in daily communication about the matter. Israeli Defense Minister Ehud Barak — who has been issuing contradictory “yes” and “no” statements recently — is supposed to meet with Panetta in the Pentagon Feb. 29. President Barack Obama is scheduled hold discussions with warhawk Israeli Prime Minister Benjamin Netanyahu at the White House on March 5.

In the midst of this gathering war talk, however, there are indications that Washington may be growing more cautious for several possible reasons. For instance:

In any event, President Obama knows very well that Iran is not building a nuclear weapon. The U.S. has been aware of this fact for years.

This is where the world’s most influential newspaper, the New York Times, comes into the picture. The newspaper published a relatively sensational front page article Feb. 25 about Iran and the bomb based on information that has been publicly known for five years, but about which most Americans know very little because it was downplayed or ignored by mainstream media. There had to be a particular reason for updating and featuring the information now.

The Times’ headline read: “U.S. Agencies See No Move by Iran to Build a Bomb.” Since the Iranian “threat” is based upon the premise Tehran is constructing a nuclear weapon, this is obviously big news for the broader American and international public, though the American left and alternative media have commented on it for years. The article disclosed:

American intelligence analysts continue to believe that there is no hard evidence that Iran has decided to build a nuclear bomb. Recent assessments by American spy agencies are broadly consistent with a 2007 intelligence finding that concluded that Iran had abandoned its nuclear weapons program years earlier, according to current and former American officials. The officials said that assessment was largely reaffirmed in a 2010 National Intelligence Estimate, and that it remains the consensus view of America’s 16 intelligence agencies.

The article also reported on some extraordinary statements made in the last few weeks by Obama Administration officials:

In Senate testimony on Jan. 31, James R. Clapper Jr., the director of national intelligence, stated explicitly that American officials believe that Iran is preserving its options for a nuclear weapon, but said there was no evidence that it had made a decision on making a concerted push to build a weapon. David H. Petraeus, the C.I.A. director, concurred with that view at the same hearing. Other senior United States officials, including Defense Secretary Leon E. Panetta and Gen. Martin E. Dempsey, the chairman of the Joint Chiefs of Staff, have made similar statements in recent television appearances.

“They are certainly moving on that path, but we don’t believe they have actually made the decision to go ahead with a nuclear weapon,” Mr. Clapper told the Senate Select Committee on Intelligence.

Published in the same issue of the Times was a new statement from the International Atomic Energy Agency (IAEA) that Iran is producing additional nuclear fuel inside a deep underground site — a fact that Israel and other opponents of the Tehran regime claim is a prelude to creating a weapon with which to threaten Israel.

There was no proof, however, that Iran is building a nuclear weapon. Given the immense U.S. and Israeli spying apparatus inside Iran, as well as America’s considerable surveillance abilities — from spy satellites to drone flights and probable access to every telephone call and Internet message in Iran — it is telling that no evidence has been collected to verify the bomb-making charges.

Iran insists it is not producing or about to produce nuclear weapons, and maintains that its nuclear power program is essentially in compliance with the Nuclear NonProliferation Treaty. Israel is known to possess at least 200 nuclear weapons and delivery systems while ignoring the treaty.

Former IAEA leader Mohamed ElBaradei declared in 2009: “I don’t believe the Iranians have made a decision to go for a nuclear weapon, but they are absolutely determined to have the technology because they believe it brings you power, prestige and an insurance policy.”

Kenneth C. Brill, a former United States ambassador to the IAEA and ex-intelligence official, told the Times: “I think the Iranians want the capability, but not a stockpile.” He recalled that “The Indians were a screwdriver turn away from having a bomb for many years. The Iranians are not that close.”

Speaking of India, the U.S. is on exceptionally close terms with the three countries in possession of large nuclear arsenals that have thumbed their noses at the NonProliferation Treaty — Israel, Pakistan and India — even to the point of assisting them to maintain and update their weaponry.

The Times also reported that intelligence officials and outside analysts have speculated that “Iran could be seeking to enhance its influence in the region by creating what some analysts call ‘strategic ambiguity.’ Rather than building a bomb now, Iran may want to increase its power by sowing doubt among other nations about its nuclear ambitions.”

The fact that the Times decided to publish a front page article primarily based on dated information that at one time was disparaged by the Bush Administration and minimized by the Obama Administration, is a story in itself. It evidently means that America’s ruling elite is leaning on the White House not to further escalate its antagonism toward Iran at least for now, when Afghanistan and other trouble spots are already intruding on President Obama’s election campaign.

Our view is that U.S. animosity toward Iran has nothing to do with Tehran’s alleged efforts to construct nuclear weapons. It is instead based on geopolitical considerations relating to Washington’s intention to exercise unimpeded domination of the Persian Gulf region, in which up to 40% of the world’s petroleum originates and is transported through the Gulf.

America has sought hegemony over the Middle East, and particularly the Persian Gulf, for several decades. When Iraq invaded neighboring Kuwait in 1990 (incorrectly thinking allied Washington would approve), President George H.W. Bush believed President Saddam Hussein was making a grab for hegemony over a chunk of the Gulf and massively retaliated, crushing the country and imposing harsh sanctions for a dozen years.

One of the reasons President George W. Bush decided to invade still-crippled but oil-rich Iraq in 2003 was to seize U.S. control of the Gulf, thinking that a quick victory would pave the way for the U.S. to also topple the government in Iran. The Iraqi fightback and the subsequent stalemate destroyed Bush’s plans. Since Baghdad had long been Tehran’s main enemy, the only country to benefit from Bush’s neoconservative folly in Iraq was Iran. Interestingly, the Sunni Taliban, which took power in Afghanistan in 1995, hated Shi’ite Iran — and Bush II removed them as well, at least temporarily.

Iran is now the principal power within the Persian Gulf region. It is not using that power to threaten or attack a near neighbor (Saudi Arabia) or more distant neighbor (Israel). It also understands that if it ever went to war with either country the U.S. would use its might to destroy Iran. Tehran’s military is not large, and is primarily defensive in structure.

But as long as Tehran refuses to subordinate itself to imperial Washington it remains an obstacle to strategic American geopolitical ambitions. A main reason for the Obama Administration’s ever-tightening economic sanctions is to bring about regime-change in Iran to situate a client regime in Tehran. If this doesn’t work, the threat of military action is obviously implicit in President Obama’s mantra about how “No option is off the table.”