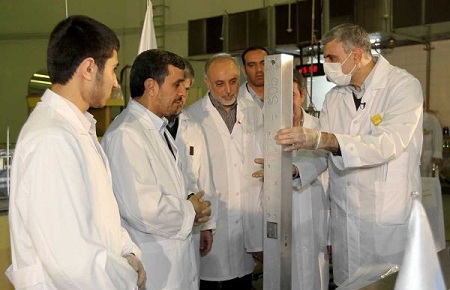 In this line, the latest IAEA report independently verifies that Iran has gained significant technological achievements and has made notable technical progress in its nuclear program despite systematic covert operations aimed at sabotaging its nuclear program including through terrorist assassination of Iranian nuclear experts and cyber attacks on Iran’s nuclear facilities. The IAEA report shows that, over the last reporting period, Iran has been able to increase the number of its installed centrifuges from the previous 8,000 centrifuges to 9,156 by February 19, 2012. Iran has also succeeded in augmenting the number of its operating centrifuges being fed with uranium gas from the previous 6,208 centrifuges to a remarkable 8,808 centrifuges by the end of the last reporting period.

The increase in the number of operating centrifuges has also translated into higher low-enriched uranium (LEU) production at Iran’s Natanz Uranium Enrichment Center. According to the latest IAEA report, Iran produced 580 kilograms of LEU over the last reporting period, thus adding its total stock of LEU up to 5,451 kg as of February 4, 2012. This means that the monthly LEU production at Natanz has increased from the previous average of 145 kg to a remarkable 170 kg in the last reporting period. The evidence presented in the latest IAEA report thus provides support for the recent claim of Iranian authorities that the Stuxnet virus has been completely removed from Iran’s nuclear facilities and that their nuclear facilities have become immunized to cyber attacks now.

The latest IAEA report also independently verifies that Iran has scored on other major nuclear technology fronts. The report confirms Iran’s earlier official announcement, which had been disputed or downplayed by some Western observers skeptical of Iran’s technological capacity, that it has mastered other aspects of nuclear fuel production by manufacturing its own domestically-made nuclear fuel plates, rods, and assemblies, some of which were recently put to use at Tehran’s Nuclear Research Reactor.

According to the latest IAEA report, Iran’s production of LEU enriched to 20% level, suitable for use at Tehran’s Research Reactor, producing medical isotopes for cancer patients, also continues unabated. Besides Natanz, Iran has also started producing 20% enriched uranium at Fordow Uranium Enrichment Center on a smaller scale. The recent expansion of the production of 20%-level LEU seems to be related to Iran’s success in completing the process of fuel plates and fuel rods production. As Iran now has the option of converting all its 20%-level LEU stock to ready fuels at home for use at Tehran’s Research Reactor or even potentially for export markets in the future, it has more incentives for maintaining and expanding its current 20%-level enrichment activities.

The overall evidence presented in the IAEA report on the latest developments in Iran’s nuclear activities points to two major facts which can potentially have important bearings on the future direction of Iran’s nuclear issue. First, Iran’s technological capacity in the nuclear field is more advanced and sophisticated than previously thought by many Western observers. Iran’ success in significantly boosting its monthly LEU production at its major uranium enrichment sites by increasing the number of its operating centrifuges and improving their performance, producing its own nuclear fuel plates and rods for its nuclear reactors, as well as its continuing nuclear research and development activities all point to the growing pool of its indigenous technological know-how and capacity and its increased resilience against foreign covert sabotage operations. Such developments cast serious doubts on the effectiveness of covert sabotage operations against Iran’s nuclear facilities, targeted assassination of Iranian nuclear experts, and possible military strikes on Iran’s nuclear facilities as viable strategies for coping with Iran’s nuclear issue.

It is interesting to note that these developments have occurred while Iran has also extended its cooperation to the IAEA to remove its ambiguities about Iran’s past nuclear activities. In other words, the latest developments further highlight the main components of Iran’s own two-track strategy toward Western powers over its nuclear issue. While Western powers have combined increased economic and other forms of pressure over Iran with offers of further talks with it, Iran has also responded in kind with expanding its nuclear program and offering diplomatic avenues to address the issue. In short, toughness on the part of Western powers has yielded toughness on the part of Iran as increased Western pressures over Iran have translated into expanded nuclear activities. If this outcome is not what Western powers had intended to achieve with regard to Iran, then it seems serious revision of their current Iran strategy with the aim of a more serious and honest engagement of Iran is long overdue.