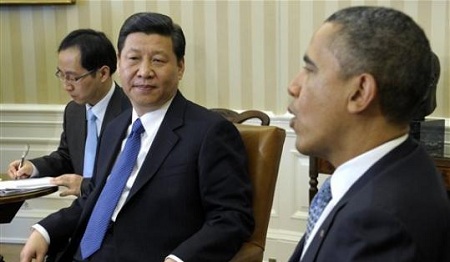 Is Obama a hypocrite or merely insouciant?  Or is he an idiot?

According to news reports Obama’s White House meeting on Valentine ’s Day with China’s Vice President, Xi Jinping, provided an opportunity for Obama to raise “a sensitive human rights issue with the Chinese leader-in-waiting.”  The brave and forthright Obama didn’t let etiquette or decorum get in his way. Afterwards, Obama declared that Washington would “continue to emphasize what we believe is the importance of realizing the aspirations and rights of all people.”

Think about that for a minute. Washington is now in the second decade of murdering Muslim men, women, and children in six countries. Washington is so concerned with human rights that it drops bombs on schools, hospitals, weddings and funerals, all in order to uphold the human rights of Muslim people. You see, bombing liberates Muslim women from having to wear the burka and from male domination.

One hundred thousand, or one million, dead Iraqis; four million displaced Iraqis; a country with destroyed infrastructure and entire cities, such as Fallujah, bombed and burnt with white phosphorus into cinders is the proper way to show concern for human rights.

Ditto for Afghanistan.  And Libya.

In Pakistan, Yemen, and Somalia, Washington’s drones bring human rights to the people.

Abu Ghraib, Guantanamo, and secret CIA prison sites are other places to which Washington brings human rights. Obama, who has the power to murder American citizens without due process of law, is too powerless to close Guantanamo Prison.

He is powerless to prevent himself from supplying Israel with weapons with which to murder Palestinians and Lebanese citizens to whom Obama brings human rights by vetoing every UN resolution passed against Israel for its crimes against humanity.

Instead of following Washington’s human rights lead, the evil Chinese invest in other countries, buy things from them, and sell them goods.

Has any foreign dignitary ever raised “a sensitive human rights issue” with Obama or his predecessor?  How is the world so deranged that Washington can murder innocents for years on end and still profess to be the world’s defender of human rights?

How many people has China bombed, droned, and sanctioned into non-existence in the 21st century?

Will Syria and Iran be the next victims of Washington’s concern for human rights?

Nothing better illustrates the total unreality of life in the West than the fact that the entire Western world did not break out in riotous laughter over Obama’s expression of his human rights concern over China’s behavior.

Washington’s concern with human rights does not extend as far as airport security where little girls and grandmothers are sexually groped. Antiwar activists have their homes invaded, their personal possessions carried off, and a grand jury is summoned to frame them up on some terrorist charge. US soldier Bradley Manning is held for two years in violation of the US Constitution while the human rights government concocts fabricated charges to punish him for revealing a US war crime. WikiLeaks’ Julian Assange is harassed endlessly with the goal of bringing him into the human rights clutches of Washington. Critics of Washington’s inhumane policies are monitored and spied upon.

Washington is the worst violator of human rights in our era, and Washington has only begun.

Who will liberate Americans from Washington’s clutches?