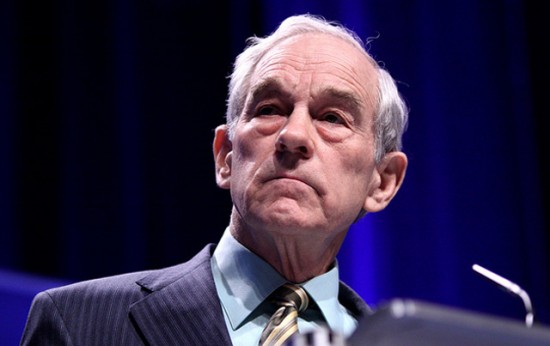 America has one last chance, and it is a very slim one. Americans can elect Ron Paul President, or they can descend into tyranny.

Because he is the only candidate who is not owned lock, stock, and barrel by the military-security complex, Wall Street, and the Israel Lobby.

All of the others, including President Obama, are owned by exactly the same interest groups.  There are no differences between them.  Every candidate except Ron Paul stands for war and a police state, and all have demonstrated their complete and total subservience to Israel. The fact that there is no difference between them is made perfectly clear by the absence of substantive issues in the campaigns of the Republican candidates.

Only Ron Paul deals with real issues, so he is excluded from “debates” in which the other Republican candidates throw mud at one another: “Gingrich voted $60 million to a UN program supporting abortion in China.”  “Romney loves to fire people.”

More importantly, only Ron Paul respects the US Constitution and its protection of civil liberty. Only Ron Paul understands that if the Constitution cannot be resurrected from its public murder by Congress and the executive branch, then Americans are lost to tyranny.

There isn’t much time in which to revive the Constitution. One more presidential term with no habeas corpus and no due process for US citizens and with torture and assassination of US citizens by their own government, and it will be too late. Tyranny will have been firmly institutionalized, and too many Americans from the lowly to the high and mighty will have been implicated in the crimes of the state. Extensive guilt and complicity will make it impossible to restore the accountability of government to law.

Having said this, there is no way Ron Paul can be elected, for these reasons:

Not enough Americans understand that the “war on terror” has been used to create a police state. The brainwashed citizenry believe that the police state is making them safe from terrorists.

Liberals, progressives, and the left-wing oppose Ron Paul, claiming that “he would abolish the social safety net, privatize Social Security and Medicare, throw the widows and orphans into the street, abolish the Federal Reserve,” etc.

Apparently, liberals, progressives, and the left-wing do not understand that privatizing Social Security and Medicare and destroying the social safety net are policies that many conservative Republicans favor and are policies that Wall Street is forcing on both political parties. In contrast, a President Ron Paul would be isolated in the White House and would never be able to muster the support of Congress and the powerful interest groups to achieve such radical changes. Moreover, Ron Paul has made it clear that a welfare-free state cannot be achieved by decree but only by creating an economy in which opportunity exists for people to stand on their own feet. Ron Paul has said that he does not support ending welfare before an economy is created that makes a welfare state unnecessary.

Candidate Paul cannot take any steps to reassure Americans that he would not throw them to the mercy of the free market, because his libertarian base would turn on him as another unprincipled politician willing to sacrifice his principles for political expediency.

If libertarians were not inflexible, candidate Paul could endorse Ron Unz’s proposal to solve the illegal immigration problem by raising the minimum wage to $12 an hour, so that Americans could afford to work the jobs that are taken by illegals.

Economist James K. Galbraith is probably correct that Unz’s proposal would boost the economy by injecting purchasing power and that the unemployment would be largely confined to illegals who would return to their home country. However, if Ron Paul were to treat Unz’s proposal as one worthy of study and consideration, libertarian ideologues would write him off. Whatever liberal/progressive support he gained would be offset by the loss of his libertarian base.

Why can’t libertarians be as intelligent as Ron Unz and see that if the Constitution is lost all that remains is tyranny?

In short, Americans cannot see beyond their ideologies to the real issue, which is the choice between the Constitution and tyranny.

So we hear absurd accusations that Ron Paul, a libertarian, “is a racist.” “Ron Paul is an anti-semite.” “Ron Paul would favor the rich and hurt the poor.”

We don’t hear “Ron Paul would restore and protect the US Constitution.”

What do Americans think life will be like in the absence of the Constitution?  I will tell you what it will be like, but first let’s consider the obstacles Ron Paul would face if he were to win the Republican nomination and if he were to be elected president.

If despite everything, Ron Paul were to end up in the White House, he would not be able to form a government that would support his policies. Appointments to cabinet secretaries and assistant secretaries that would support his policies could not be confirmed by the US Senate. President Paul would have to appoint whomever the Senate would confirm in order to form a government. The Senate’s appointees would undermine his policies.

What a President Ron Paul could do, assuming Congress, controlled by powerful private interest groups, did not impeach him on trumped up charges, would be to use whatever forums that might be permitted him to explain to the public, judges, and law schools that the danger from terrorists is miniscule compared to the danger from a government unaccountable to law and the Constitution.

The reason we should vote for Ron Paul is to signal to the powers-that-be that we understand what they are doing to us. If Paul were to receive a large vote, it could have two good effects. One could be to introduce some caution into the establishment that would slow the march into more war and tyranny. The other is it would signal to Washington’s European and Japanese puppets that not all Americans are stupid sheep. Such an indication could make Washington’s puppet states more cautious and less cooperative with Washington’s drive for world hegemony.

In the January 4 Huffington Post, attorney and author John Whitehead reported on the militarization of local police. Some police forces are now equipped with spy drones. Whitehead reports that a drone manufacturer, AeroVironment Inc., plans to sell 18,000 drones to police departments throughout the country. The company is also advertising a small drone, the “Switchblade,” which can track a person, land on the person and explode.

How long before Americans will be spied upon or murdered as extremists at the discretion of local police?

Recognizing the privacy danger, if not the murder danger, the American Civil Liberties Union has issued a report, “Protecting Privacy From Aerial Surveillance.”  The ACLU believes, correctly, that liberty is threatened by “a surveillance society in which our every move is monitored, tracked, recorded, and scrutinized by authorities.”

The ACLU calls on Congress to legislate privacy protections against the police use of drones. I support the ACLU because it is the most important defender of civil liberty despite other misguided activities, but I wonder what the ACLU is thinking. Congress and the federal courts have already acquiesced in the federal government’s warrantless spying on Americans by the National Security Agency.  The Bush regime violated the Foreign Intelligence Surveillance Act many times, and all involved, including President Bush, should have been sent to prison for many lifetimes, as each violation carries a 5-year prison term. But the executive branch emerged scot free.  No one was held accountable for clear violations of US statutory law.