The Sources and Risks of Russia’s White Revolution 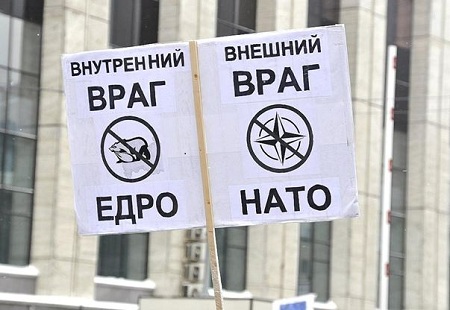 Why Putin failed and the Russian democrats may too

Russian imperial nationalism and anti-Westernism has been a distraction for Putin & Co., who missed the emergence of a domestic challenge, and did not see the crisis of their regime coming. These same factors may also, however, subvert the currently growing pro-democratic protest movement in Moscow and beyond.

It is yet unclear what the exact outcome of the current upheaval in Moscow will eventually be. Yet, it seems already obvious that Russian politics will change substantially, in 2012. To be sure, whether Russia indeed becomes more democratic and free as a result of the growing protests remains open. Nonetheless, speaking of an – at least, attempted – Color Revolution is already justified. To be sure, neither would Russia’s possible White Revolution be a real revolution, nor were the other Color Revolutions fully fledged revolutionary upheavals. Yet, there is now, in Russia, the typical pattern of mass protests after a falsified election that partly delegitimizes the incumbent leadership, if not the entire regime. This is a sequence similar to, though not (yet) identical with, what we observed in Serbia in 2000, Georgia in 2003, Ukraine in 2004 and Kyrgyzstan in 2005 – as well as, perhaps, the Arab world, more recently. Why is the Putin system which looked stable as recently as a year ago currently failing? And what are the risks for the re-emerging democratic movement in Russia?

The “Power Vertical” and Corruption

Arguably, Putin made – within the logic of his own system that could have survived longer – one major strategic and one crucial tactical mistake. Strategically, Putin’s preeminent failure was that his “vertical of power” did not fulfill one of its major purposes: to end or, at least, limit corruption in post-Soviet Russia. Instead, of producing a modernizing authoritarianism along the lines of post-war South Korea, Taiwan or Singapore, Putin’s rule deepened rather than erased certain pathologies of late Soviet and early post-Soviet society. Above all, it did not reduce the massive bribe-taking/-giving that goes on in all spheres of Russian public life. Corruption seems to have become even a problem for the security organs that grew out of the KGB – from where Putin once came.

This failure has discredited the rationale of Putin’s contract with society: Instead of trading political freedom for effective governance, the “national leader” took away Russians’ civil and political rights without, however, delivering what he had promised, in exchange. Neither did he end the collusion between the state and the so-called “oligarchs,” nor did he fight bureaucratic arbitrariness effectively. It is no accident that one of the leaders of the current protest movement, the nationalist Alexei Navalnyi, made himself initially a name by blogging about prominent corruption cases in Russia’s elite.

The Orange Revolution and Conspirology

The major tactical blunder of Putin was that he refused to comprehend the reasons and nature of the post-Soviet Color Revolutions, above all of Ukraine’s Orange Revolution – or, at least, drew the wrong lessons from them. Putin and Co. should have been alerted by how quickly and easily Kuchma’s semi-authoritarianism was, in 2004, brought down by the citizens of “Little Russia,” as Ukraine is sometimes labeled in “Great Russia.” One suspects that the reason for Putin’s obvious misunderstanding of the Orange Revolution as a US-inspired upheaval had to do with his own and his “political technologists’” massive personal and financial investment in the 2004 Ukrainian presidential elections. What followed was a blatant misrepresentation of the Orange Revolution, in Russian mass media, as the result of cunning manipulations by Western intelligence services and political foundations.

To be sure, a number of Western and other international organizations – from the US National Endowment for Democracy to the OSCE Office for Democratic Institutions and Human Rights – did play their role in securing both the discovery and publicity of the electoral falsifications, as well as the peacefulness and effectiveness of the following protests. However, this Western support – largely going to Ukrainian NGOs rather than parties – played, if at all significant, only a catalyzing role. The main problem was the November 2004 presidential election round itself, and the purpose of much of the following talk about the West’s role in the 2004 Ukrainian events to distract from this. As Yanukovych’s victory and Tymoshenko’s loss (as well as Yushchenko’s humiliation) in the largely fair 2010 presidential elections has shown, the West is neither able nor willing to secure the victory of a pro-Western candidate against the will of a country’s population.

Putin’s and his propagandists’ rhetoric about the 2004 Orange Revolution as a Western operation was designed to cover the Russian leadership’s failure to prevent the rise to power of the pro-Western faction of the Kyivan elite, as well as of a new democratization attempt in Ukraine. Eventually, the neo-Soviet Russian leaders – like the Soviet ones before – fell into the trap of believing their own propaganda. Once the idea of a major role of the West – particularly the United States – in Ukraine’s mass action of civil disobedience was entered by Putin and his ideologists into Russian political discourse, the idea took a life of itself. Since then, it has been widely popularized and creatively elaborated upon by Russia’s numerous conspiracy theorists, political sensationalists, and ultra-nationalist publicists. As a result, the Russian journalistic and academic analysis of the social foundations and political pre-conditions of the post-Soviet world’s various electoral upheavals has been thoroughly corrupted.

The lesson for the Kremlin should have been to open Russia’s political system, broaden its social base, and soften the authoritarian rule. Instead, Putin “modernized” his autocracy in the opposite direction. In the immediate aftermath of the Orange Revolution, in 2005, a whole array of new institutions, organizations, and concepts were introduced in Russia that partly reminded of propaganda instruments of totalitarian regimes. These innovations included various youth organizations such as “Nashi” (Ours), the Young Guard of United Russia, Eurasian Youth Union, “Molodaia Rossiia” (Young Russia), or “Mestnye” (The Locals), and new state TV stations, i.e. the English-language “Russia Today,” Orthodox “Spas” (Saviour) or military “Zvezda” (The Star) cable channels. It also included the so-called Public Chamber as a transmission belt between the Russian authoritarian state and semi-autonomous intellectual elite, or the Day of Unity holiday on November 4th – quickly hijacked by Russia’s extreme nationalists and their “Russian Marches.”

It is remarkable that all of these and some other new initiatives took effect in 2005, i.e. in the year that followed the November-December 2004 Orange Revolution in Ukraine. Most prominently, Putin’s chief behind-the-scenes schemer Vladislav Surkov introduced in spring 2005 the concept of “sovereign democracy.” This misnomer became the ideological centerpiece of the Putin regime’s world view, and purported that Russian political stability is threatened by foreign rather than domestic factors. Much of Putin’s and his collaborators’ post-Orange rhetoric thus consisted of anti-Western hysteria, imperial megalomania, neo-Soviet conservatism, as well as nationalist jingoism.

Not only did Putin and Co. distract themselves by their own propaganda. They also “oversaw” that the idea of democracy is surely weak, but not rootless, in Russia. The Russian democratic tradition goes back at least as far as December 1825 when a group of young Russian aristocrats, who became known as “the Decembrists,” unsuccessfully tried to end Russian autocracy. This democratic tradition was, in the 19th century and early 20th century, continued by the Westernizers (and, partly, even by the Slavophiles), social revolutionaries, social democrats (Mensheviki), as well as constitutional democrats of the declining Tsarist regime. During Soviet rule, the Men of the Sixties (“shestidesiatniki”) within the Soviet intellectual elite, the anti-Soviet human rights activists of the 1960s-1970s, and so-called “informals” of the glasnost-induced Soviet civic movement of the late 1980s helped to prepare Russia’s democratization that started, around 1990, as a result of Gorbachev’s perestroika. Most of the older activists of the current protest movement were either themselves members or have been inspired by the ideas, spirit and activities of this earlier generation of the late Soviet and early post-Soviet democrats. Symbolically, the 24 December 2011 demonstration took place on a Moscow street named after Andrei Sakharov – Soviet Russia’s most prominent human rights activist who, shortly before his death, played some role in bringing down the communist system in 1989.

While the historical rootedness of the current protests may look encouraging, the actual history of the Russian democratic movement, however, is not. Whether in 1825, 1905-1918 or 1987-1999 – all of Russia’s democratization attempts failed miserably, in the end. The current re-democratization drive may become victim to factors similar to those which subverted, for instance, Gorbachev’s and Yeltsin’s introduction of political pluralism: disunity among the liberals, anti-Western paranoia, and imperial nationalism.