Palestine: Those Who Inspired Us in 2011 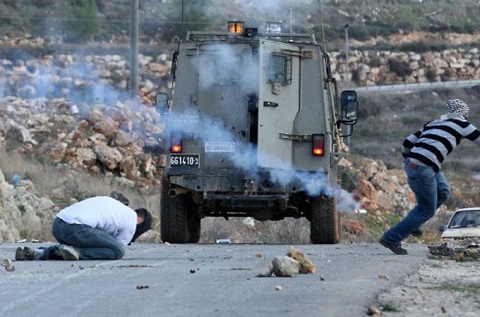 Mustafa Tamimi was a 28-year-old resident of the West Bank village of Nabi Saleh. His meticulously trimmed beard served as the centerpiece of his handsome face.

In December 2009, when an Israeli soldier shot him from a short distance with a tear gas canister, half of Mustafa’s face went missing. More soldiers laughed as his horrified family tried to accompany him to a nearby hospital, according to activists present at the scene. Only the mother was finally able to obtain a special permit from the Israeli military, which allowed her to be with her son.

Mustafa’s crime? He, along with Palestinian, Israeli and international peace activists, protested the besiegement of Nabi Saleh by the illegal Jewish settlement of Halamish. Halamish has existed since 1977 and drastically grown in size and population ever since, taking over privately-owned Palestinian land. As of late, Nabi Saleh has been struggling for mere survival as its fresh water spring has also been seized by settlers under the watchful eye of the Israeli army.

Mustafa died so that the village of Nabi Saleh could live. The struggle will continue for years.

A young man may now be gone, but he also left behind a legacy which has become the cornerstone of the augmenting international solidarity with Palestinians around the globe.

The struggle for justice in Palestine is ultimately between a Palestinian – protesting, with a rock or rifle in hand – and an Israeli, often equipped with the latest killing technology the arms industry has to offer. The former fights for basic rights – land, water, freedom, equality and such – while the latter is determined to intimidate, silence, imprison, and, when compelled, commit murder or even large scale massacres to prolong Israeli occupation and military dominance over Palestinians.

One such Israeli is Tamar Fleishman, of Machsomwatch. She is simply indefatigable. Her mission is to document the daily violations committed by the Israeli army at a series of checkpoints extending between Ramallah (in the West Bank) and Jerusalem. Showing a complete disregard for international law, and even the official foreign policy of the United States, Israel has insisted that the entirety of Jerusalem is Israel’s eternal capital. But illegally occupied East Jerusalem – or al-Quds – has been the beating heart of Palestinian national, religious and even intellectual identity for many generations. To split the heart from the body, Israel has been choking occupied East Jerusalem since 1967, encircling it with illegal Jewish settlements, Jewish-only bypass roads, and a dizzying checkpoint structure intended to create a permanent divorce between the West Bank and a city that Palestinians see as their future capital.

Armed with a camera and her own willpower, Tamar is relentless. She knows by name all the tired-looking children who sell tea in plastic cups, newspapers and gum at all the checkpoints. She narrates their stories of humiliation, pain and struggle. She tells of the people crammed between glass walls, barbed wire and blocks of cement. As long as these women and men keep the checkpoints populated, Jerusalem will maintain its historic attachment with the rest of Palestine.

And Tamar, the habitual visitor of these very spots, will resume her daily toil to convey the stories that capture the essence of this enduring conflict.

But without the numerous media outlets that challenge the inherent pro-Israeli bias, censorship and apathy of mainstream media, Mustafa’s story and Tamar’s photos would have remained confined to Nabi Saleh, or some checkpoint manned by cruel soldiers.

In fact, the story of Palestine is getting more than a good share of coverage in old and new alternative media outlets. More, 2011 has concluded on a positive note as far as media coverage of this conflict is concerned. In an article entitled, ‘The media consensus on Israel is collapsing’, Jordan Michael Smith reveals that “slowly but unmistakably, space is opening up among the commentariat for new, critical ideas about Israel and its relationship to the United States” (salon.com, December 21). While Smith rightly credits the academics Tony Judt, Stephen Walt and John Mearsheimer for “expanding the permissible,” the pressure on mainstream media has been obstinately championed by numerous individuals from all walks of life. It is they, who, for many years, refused to subscribe to the convenient narrative that venerates and vindicates Israel – not only at the expense of Palestinians, but also at the expense of the United States’ foreign policy.

One platform that has become very successful in recent years, and particularity so in 2011, was the Boycott, Divestment and Sanctions (BDS) movement.

“The BDS movement is growing relentless,” wrote Eric Walberg, author and editor at al-Ahram Weekly. His ‘BDS Updates’ regularly highlight the overwhelming success of the worldwide initiative that is partly modeled on the triumphant anti-Apartheid movement of South Africa. His year-ender updates for 2011 included the cancelation of an Israel tour by the famous musician Natacha Atlas (though sadly, not all artists were so principled). Walberg also reported that “in a wonderfully shocking divestment move, Israeli powers-that-be are furious at BNP Paribas for shutting down its operations in Israel. (They) believe the bank’s board of directors caved to pressure groups, in the first case in years of a foreign bank leaving Israel…” Such reports are now stable items crowding social media channels on a regular basis.

True, 2011 had its share of tragedy. Human lives were lost in Palestine. But hope was also sustained by the sacrifices of numerous ‘ordinary’ people who collectively managed to achieve many hard-earned feats. It is these numerous small victories that will make it difficult for Israel to continue with its futile campaign to occupy and dominate a people so determinately entrenched in their land – from the small village of Nabi Saleh to the proud Palestinian city of al-Quds.