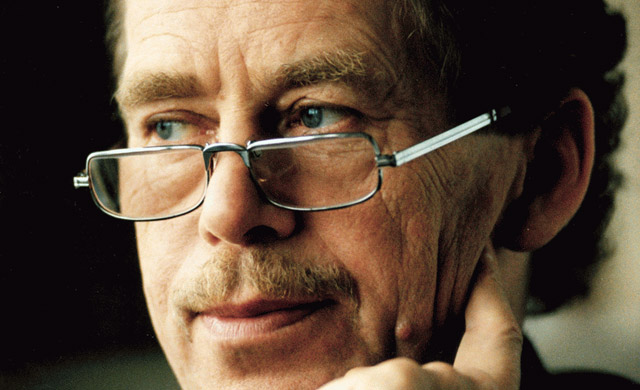 The death of Vaclav Havel on December 18, 2011, last president of Czechoslovakia and first president of the Czech Republic, has brought accolades from media pundits and political and plutocratic luminaries for the role he played in the dismantling of the Soviet bloc. Given that the Warsaw Pact was the only geopolitical entity that constrained American global hegemony Havel’s contribution to its demise is lauded as a great victory for “democracy” and “freedom.” However, those are words that are used by many regimes and systems, no matter what their character, and have been euphemisms since the time of Woodrow Wilson’s Fourteen Points for post-war international reconstruction in the image desired by the USA, for the subordination of all nations, peoples and cultures to everything that is conjured by the word “America.”

Havel is said to have been an idealistic opponent of the consumerist ethic, yet what is one to think of an individual who allowed himself to be mentored and patronized by the likes of George Soros, and flitted about among the luminaries of plutocracy? His critique of “The West” was perceptive, stating:

There is no need at all for different people, religions and cultures to adapt or conform to one another…. I think we help one another best if we make no pretenses, remain ourselves, and simply respect and honor one another, just as we are.[1]

Yet such fine sentiments were antithetical to the world-view and aims of the people and organization that used him and now honor him. Like the much lauded Gorbachev, Havel became an icon of manufactured dissent in the interests of international capital that pull the strings behind the façade of “democracy.” The “velvet revolutions” that were instigated, funded and planned by the Soros network, National Endowment for Democracy, and others, were a prelude to the same types of revolt that continue to be inflicted upon the former Soviet bloc states and that are still taking place under the mantle of the “Arab Spring.”

Charter 77, Plastic People of the Universe & the Politics of “Rootless Cosmopolitanism”

The rot that was eating away within the Warsaw Pact was organizationally focused on groups such as Charter 77 in Czechoslovakia and Solidarity in Poland. These groups were instigated and funded by the network of currency speculator George Soros and an array of subversive, largely US-based and Government connected think tanks. When Charter 77 was co-founded by Havel in 1977, its manifesto was published by the Western media by pre-arrangement, in the Frankfurter Allgemeine Zeitung, Corriere della Sera, The Times of London, and Le Monde.[2] Charter 77 was supported from outside Czechoslovakia by the Charter 77 Foundation based in Stockholm.

The Charter 77 manifesto was drafted and a movement formed after the imprisonment of fans of the rock band, Plastic People of the Universe. It is significant that this was catalyst for what became the “velvet revolution.” Kulturkampf is a major part of the globalist offensive to the extent that at the very beginnings of the Cold War the CIA recruited sundry disaffected anti-Soviet socialists, and in particular Trotskyites, into the Congress for Cultural Freedom to try and subvert the Soviet bloc and impose “American” values over the world in the name of “freedom of artistic expression.” Their favored mediums were Abstract Expressionism and jazz.[3] The Congress was established under the figurehead of Professor Sidney Hook, a “lifelong Menshevik” who had organized a committee for the defense of Leon Trotsky at the time of the Moscow Trials, and a recipient of the Congressional Medal of Freedom from Ronald Reagan. Other Congress luminaries included Bertram Russell, the pacifist CND guru who had sought a pre-emptive nuclear strike against the USSR in the interests of “peace.” The Congress promoted the type of art that had been exposed as subversive “rootless cosmopolitanism” by Stalin, et al., who correctly perceived it as part of a political offensive.[4] This globalist kulturkampf has been described by neocon military strategist Ralph Peters, who worked at the Office of the Deputy Chief of Staff for Intelligence, and elsewhere, stating that, “We are entering a new American century, in which we will become still wealthier, culturally more lethal, and increasingly powerful.” Peters outlined a strategy for subverting nations and peoples reticent about entering the “new American century,” by way of Hollywood, the pop icon, and the dazzle of technology,[5] imposing a type of soft servitude over the world of the type described in Huxley’s Brave New World.

Just how significant this kulturkampf in the service of globalization is, and not merely as a matter of “free expression,” and individualistic “personal choice” of “taste,” etc., can be seen in the role the band Plastic People of the Universe (PPU) played in serving as a catalyst for the “velvet revolution.” The band is acknowledged as musically “unremarkable” yet its backers ensured that it became politically remarkable. Their origins go back to the orchestrated revolt in Czechoslovakia in 1968.[6] The band obtained the assistance of Canadian music teacher Paul Wilson, the resident in Czechoslovakia. They became the “fathers of the Czech musical underground.”[7]

One commentator states that “an entire community of Czech dissidents sprung up around the band.” According to bassist and founding member Milan Hlavsa:

The Plastic People emerged just as dozens and hundreds of other bands—we just loved rock’n’roll and wanted to be famous. We were too young to have a clear artistic ambition. All we did was pure intuition: no political notions or ambitions at all.[8]

Despite the quaint expressions of naiveté by Hlavsa it was precisely the type of youthful nihilism that the CIA and plutocrats had been promoting in the West in the form of the “New Left” as a means of manipulating and channeling pseudo-dissent. It followed the formulae that had been prescribed by the Congress for Cultural Freedom, and which is championed still by strategists such as Ralph Peters. It is precisely why Stalin and other Soviet leaders and theoreticians sought to expose the political ramifications of “rootless cosmopolitanism,” and why Trotsky had formulated the theory in his 1938 art manifesto, Towards a Free Revolutionary Art.[9]

Although the band’s professional license was revoked by the Government in 1970 they hedged around the regulations, and their music was released in the West. Lyrics for the “non-political” PPU were written by “Czech dissident poet Egon Bondy.”[10] What emerged around PPU was a so-called “Second Culture” or “Other Culture” which played at Music Festivals. There were arrests, but apart from a few, due to “international protests” most were released. Canadian Paul Wilson was expelled. The official indictment accused the bands of “extreme vulgarity with an anti-socialist and an anti-social impact, most of them extolling nihilism, decadence and clericalism.”[11]

It was in support of this cultural nihilism that Charter 77 emerged as a movement, with Havel as the figurehead, Havel stating that PPU were defending “life’s intrinsic desire to express itself freely, in its own authentic and sovereign way.”[12] Havel began selecting lyrics for PPU. This supposedly “non-political,” innocent, artistic free expression has since been described by The New York Times as being “wild, angry and incendiary,” and “darkly subversive.” The Soviet authorities described them in more measured terms. The NY Times enthused that PPU “helped change the future direction of a nation.” The NY Times states:

Vaclav Havel, the music-loving former Czech president and dissident who championed the band’s cause when several members were imprisoned in 1976 for disturbing the peace, credits it with inspiring Charter 77, the manifesto demanding human rights that laid the groundwork for the 1989 revolution. “The case against a group of young people who simply wanted to live in their own way,” he recalled, “was an attack by the totalitarian system on life itself, on the very essence of human freedom.”[13]

It was, stated Bilefsky, “the ultimate rock ’n’ roll rebellion.”[14] In other words, the Soviet authorities were right in their suspicions. It is the same cultural nihilism that is pumped out by the corporates and promoted as a control mechanism in the West under the banal guise of “freedom.”

Paul Wilson reminisced that it was through music that the puerile ideals of manipulated Western youth were introduced to their Czechoslovak counterparts:

One of the things that was very marked in the 1960s was that although intellectuals found it very hard to get a hold of books it was very easy for kids to be right on top of things because records were brought in and the music was broadcast over Voice of America and other radio stations. So, there was a very current music scene here, with a lot of knock-off bands and a lot of fans of different groups just the way you’d find them in the West. The other thing, too, is that the Prague music scene, very early, attracted the attention of the western press, because for them the existence of rock bands in a communist country was a sign of change.[15]

Note that the Voice of America and other US agencies were promoting this movement.