The Marriage from Hell: Jane Harman and the Woodrow Wilson Center 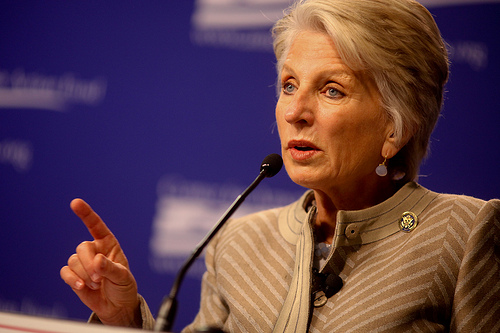 “Woodrow Wilson, the 28th American president, is looking down in horror at what the Woodrow Wilson International Center for Scholars (WWC) is doing in his name.”

I wrote that last year in two exposés: “The Selling of the WWC”  and “The WWC Desecrates its Namesake’s Legacy”.  They revealed that the Washington, DC-based Wilson Center is violating its Congressional mandate and is up to its neck in tainted corporate cash.

A leading Congressman, a Wilson family descendant, citizens’ groups, and many others agreed. One prominent journalist called the WWC “a global joke.” 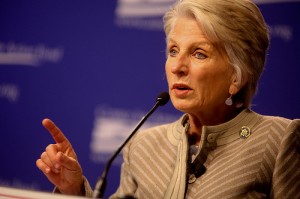 Harman, like Hamilton, is not only part of the good-old-boy (and girl) network of which the WWC is so fond.   Among her other baggage, charges of illegal conduct in a spy scandal involving AIPAC (American Israel Public Affairs Committee) have shadowed Harman for years.

Let’s take a closer look at Harman and the Wilson Center to see why they’re the marriage from hell.

Citing confidential sources, Time magazine, in 2006, and Congressional Quarterly, two years ago, reported that the Feds had wiretapped Cong. Jane Harman and a “suspected Israeli agent” agreeing to this deal: Harman would persuade the Justice Department to reduce the charges against Rosen and Weissman; in exchange, AIPAC and its influential supporters would persuade then-Minority Leader Nancy Pelosi to reappoint the unpopular Harman as top Democrat on the House Intelligence Committee.

Harman apparently promised the “Israeli agent” to “waddle into”  the AIPAC scandal “if you think it’ll make a difference.”  Harman ended the exchange with “this conversation doesn’t exist.”

Shockingly, charges against Rosen and Weissman were dropped  in 2009 because a judge put constraints on Federal prosecutors.  Larry Franklin, the Defense Department official who passed the classified documents to the two AIPAC officials, wasn’t so lucky.   He pled guilty three years earlier and went to prison.

Harman has long denied any wrongdoing.  She has never, however, given a full account of her conversations regarding Rosen and Weissman.  Full accounts, as we shall see, are not one of Harman’s virtues.

While co-sponsoring Congressional resolution HR 106 on the Armenian genocide  committed by Turkey, Cong. Harman went behind the backs of her constituents in October of 2007 by asking then-Foreign Relations Chair Tom Lantos (D-CA) to bury the resolution.  Only after her constituents discovered this through other sources did she admit to it.

But the explanations for her flip-flop made little sense. “This is the wrong time” for the resolution, wrote Harman.  But she couldn’t cite anything relevant in 2007 that had changed regarding Turkey, Armenia, or the Middle East since she signed onto the resolution a few years earlier.

Harman claimed that a genocide resolution would “embarrass or isolate the Turkish leadership.” This claim came suspiciously soon after she met with Turkey’s threatening Prime Minister, Recep Erdogan. Apparently, recognizing a genocide requires an OK from the perpetrating country’s leader.

But Harman reached truly ridiculous heights by claiming– again, this was in 2007 – that it was “obvious” that Turkey’s “leadership” was needed for “resolving the Israel-Palestine issue.”  Turkey had never, of course, played a significant role in mediating between Israelis and Palestinians. What really caused Harman’s genocide flip-flop?

AIPAC was (and is) one of several major Jewish American organizations that have colluded with Turkey to, among other things, defeat Armenian genocide resolutions. Israel, Turkey, and Jewish groups formed their ménage-à-trois in the 1990’s.

Yola Johnston, Community Outreach Director for the Jewish Institute for National Security Affairs, has admitted that AIPAC, the American Jewish Committee, B’nai B’rith, her own organization, and “the Jewish lobby” have “quite actively supported Turkey in their efforts to prevent the so-called Armenian genocide resolution from passing.”

And there’s more. Yet another scandal may have induced Harman’s genocide duplicity.

Harman wrote her genocide flip-flop letter to Chairman Lantos just as the Anti-Defamation League (ADL) was taking a beating in the U.S. and internationally for denying the Armenian genocide and helping Turkey lobby against Armenian genocide recognition.  Human rights activists, principled Jews, and Armenian Americans had just months earlier launched a campaign (see NoPlaceForDenial.com) that was to result in more than a dozen Massachusetts cities’ evicting the ADL’s so-called “No Place for Hate” anti-bias program.

The Turkish government was furious that the embarrassing arrangement among it, Jewish groups, and Israel was being splashed across the headlines.

Prime Minister Erdogan made a frantic call to Israeli President Peres, while Turkey’s foreign minister reportedly warned the Israeli ambassador that “our bilateral relations will suffer.”

Did Harman, who was certainly aware of this uproar, panic at the prospect of a further deterioration in the already strained relations between Israel and Turkey?  Did she ask Lantos to kill the genocide resolution because Turkey would blame Israel, AIPAC, the ADL, and even Harman herself if the resolution succeeded?

Considering the timing, Harman’s relationship to Israel and the genocide-denying AIPAC, and the illogical explanations for her flip-flop, it seems probable.  Though the House Committee narrowing passed the resolution, Harman had to be pleased that it did not make it any further.  Her appeasement of Turkey, however, proved to be in vain:

But when, like Harman, one has few firm principles and has fooled herself into believing that a country such as Turkey is a friend, she inevitably winds up with yogurt on her face.

No self-respecting institution would have considered hiring anyone with Harman’s background.   That may explain why the Wilson Center hired her.  It has little respect for its mission or the American people.