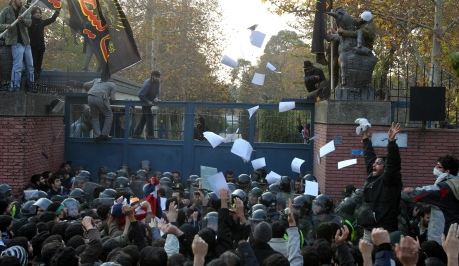 I felt quite uneasy when our man in Tehran, Dominick Chilcott, said the attack on the British Embassy was state-supported.

What doesn’t he understand about people power? Surely, he should have learned a lesson from the Arab Spring that when angry people rebel it’s impossible to stop them.

To say the Iranian police stood by and did nothing when our embassy was attacked is a bit like accusing the London Metropolitan Police of deliberately looking the other way while students trashed the Tory Party’s HQ.

It’s not that easy to control rampaging masses who are hell bent on venting their anger.

Had it really been organized by the authorities, I doubt Tehran would have been so quick and eager to make an apology when thugs entered the embassy compound and set fire to one of the rooms.

This makes the expulsion of all Iranian diplomats completely unjustifiable and the reality is the British Government has made itself deeply unpopular with ordinary Iranians … and in doing so has probably made the regime it says it hates so much, even stronger.

I’ve visited Iran twice in the last few weeks and on each occasion I felt a tangible anger directed towards me purely because I am British. This is something alien, as previously people were able to distinguish between government actions and their people.

My first hostile encounter happened in the southernmost tip of Iran in Abadan – it has a largely Arab-speaking population and if ever there was a hotbed of resistance this is it.

Recently, the workers at the massive oil refineries in the city have staged walkouts and strikes to protest non-payment of wages and the political situation in their country.

At the film festival I attended, several speeches contained blunt, anti-Tehran sentiment. But one of the festival winners used his platform to send a message to our UK delegation and, in plain English, warned: “Britain do not to mess with Iran or you will receive a reply from an iron fist.”

I felt quite uncomfortable because I am certainly no supporter of a British foreign policy which, as far as I can see, is being dictated by Washington.

A couple of days later, I discussed the uncharacteristic outburst with a distinguished intellectual during a dinner party in Tehran. He assured me that most Iranians, regardless of their political views, have a love of many things British.

He even lamented: “We love British trains and would love to have ordered some for our own rail network, but the trade embargoes and restrictions will force us to buy from China, instead.”

I hope the editor of the Derby Evening Telegraph reads this and mobilizes a campaign to break the embargo that could save Bombardier, Britain’s last train manufacturer, where 1,500 jobs were lost earlier this year and hundreds more are on the line. The plant is in danger of closing because of a lack of orders.

On my next visit, this time to Tehran’s International Film Festival, I visited the local markets and carpet factories where I spent several hours taking tea and talking politics with an assortment of Iranians of different faiths and no faith. (I couldn’t do anything else since my Visa card was as much use as an ashtray on a motorbike because of the sanctions).

Some were openly critical of Mahmoud Ahmadinejad and his leadership, but the majority were critical of Britain and what one man described as the UK’s “blind obedience” to America.

The hot topic during that visit was Iran’s nuclear ambitions and I can say, something gleaned from this and previous trips, is that without any doubt the majority of Iranians want their country to pursue nuclear energy.

While there is still no concrete evidence Iran is manufacturing nuclear weapons, the other response I received was “and so what if it turns out to be true? There are other countries in the region that haven’t signed the Nuclear Proliferation Treaty, which have nuclear weapons.”

Certainly neighboring India and Pakistan are both nuclear powers while Israel is still denying it has gone nuclear despite heroic whistleblower Mordechai Vanunu telling the world otherwise. We know that Tel Aviv has at least 200 nuclear warheads, but there’s no way of checking. Even America and Britain are told to “butt out” and the very idea of weapons inspectors paying a visit to the Zionist State is about as realistic as David Cameron increasing pensions and workers’ rights.

Following my trip, I attended a private function in London where one of the most distinguished military figures in the UK addressed the ‘Iranian question’ over dinner. He said he doubted military action would be taken but thought the UK might pursue a “hearts and minds job” on ordinary people to encourage them to rebel against their government.

He, like many in government, has absolutely no idea of what the ordinary man and woman in Iran wants, needs, or thinks. Any hope of regime change is far-fetched. Whether we in the West like it or not, the overwhelming majority of Iranians support the Islamic Republic. That’s why we haven’t seen an Arab Spring uprising in Iran.

Yes, we heard a great deal from the large, but still in the minority, English-speaking elite complaining their votes were stolen. What they were really saying privately was that the peasant and working classes who supported Ahmadinejad in their millions should not have been allowed to vote.

Such elitism is to be reviled. Yet these siren, self-serving voices are given a platform on BBC Persia, a service costing tens of millions; but while other departments in the BBC are being axed or told to save money, there’s no such budgetary demands on the Persian service.

It is treated with the utmost suspicion by Tehran, and not without good reason. Just recently the channel finally acknowledged the role it played in the toppling of the 1953 government in Iran. The service had broadcasted secret codes for starting the coup d’état which overthrew the then Iranian Prime Minister Mohammad Mosaddegh, leading to the restoration of absolute monarchy under dictator Mohammad-Reza Pahlavi.

His brutal dictatorship was later toppled in the Islamic Revolution in 1979.

In a documentary aired earlier this year, the BBC admitted for the first time its role as the propaganda arm of the British government in Iran.

After years of denials that the Persian service had an agenda, a well-researched program called Cinematograph detailed exactly how the network broadcast anti-Mosaddegh programs to undermine his government.

America has already apologized for its own role in the 1953 coup, but the secret files in the National Archives held in Kew remain classified, so even now, nearly 60 years on, we do not know exactly what sort of subversive activities were carried out by British intelligence.

Despite the history, Iranian people have always reached out to Britain and been eager to re-establish cultural, trade and business links.

But, sadly, the aggressive actions from London during the last few days have only served to push the people closer to the Iranian government. I’m not sure who is advising the British Foreign Office, but I just hope it’s not another “Curveball” character, and there are lots of them in the English capital.

The hardliners in Tehran must be rubbing their hands with glee because tougher sanctions will make the regime stronger, bring the Iranian people closer to their government, and further isolate Britain from Europe; a split is already opening up with Greece, Italy, and Spain refusing to agree to Britain’s request for even tougher sanctions.

There have even been calls to close down the London office of Press TV, a global, English-speaking news network funded by Iran, but there is a difference between state-funding and state control. There is no place for that sort of Big Brother censorship in the UK, and even the most serious detractor of Press TV would still prefer to exercise personal control of their own viewing habits.

Yet right wing political think-tanks like the Henry Jackson Society want to remove that responsibility from the masses and turn Britain into a passive, nanny state. Sorry, but we Brits don’t do passive! Every Englishman’s home is his castle and the thought of the HJS dictating what we can and can’t watch on the box is intolerable.

I, personally, don’t like Fox News, but I don’t want some meddling US think-tank telling me they’re going to remove it from my TV set.

As we head closer to another recession in the UK, all I can think is that this is not our fight and this is no time to be making enemies when we can’t even put bread on the table in our own homes.

Iran is not Iraq – it is armed, it is dangerous, and it will hit back with its vast arsenal of weaponry if attacked.

Just for starters, has it ever occurred to those advising William Hague, Cameron, and Co. that just one fire cracker on Tehran will send a tsunami of outrage across the region and into neighboring Iraq where tens of thousands of Shia Muslims will no doubt want to rip apart the nearest American or Brit they can lay their hands on.

I’m not, of course, advocating this, but this is what will happen such is Iran’s influence in the region. Similar scenes could be played out in Afghanistan and Pakistan.

And thanks to the failed wars in Iraq and Afghanistan, there is no shortage of western civilians hanging around the region as soft targets.

The good news is Iran does not have a history of attacking or invading other countries and is not a naturally aggressive nation. It knows only too well the futility of war and the exorbitant costs in terms of human life following the 8-year conflict with Saddam’s Iraq.

However to poke a stick in a wasps nest and expect not to be stung is foolhardy and reckless.

While it will not seek to make war, I hope the US and UK don’t mistake this as a sign of weakness and an open invitation to attack. And all options are not on the table, despite what Barak Obama says – the US does not have the money, the stomach, or the desire for yet another war it can’t possibly hope to win.

In fact, to be brutally frank, when was the last time America won a war on its own, outright? Obama is firing blanks and everyone knows it.

So let’s drop the macho rhetoric in Washington and in London – no one is taking it seriously. In card terms, Foreign Secretary William Hague is holding a busted flush and is looking increasingly ridiculous.

But all is not lost and the facts are plain to see. The Iranians want to buy top quality trains. The Bombardier factory can fulfill that order and save jobs and an entire community in the process.

If ever there was a glimmer of hope for re-kindling diplomatic relations between our two nations this is it. Now that would be real fast-track diplomacy.