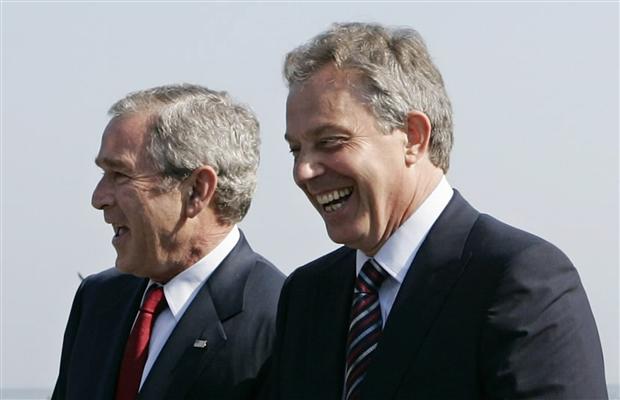 In Kuala Lumpur, after two years of investigation by the Kuala Lumpur War Crimes Commission (KLWCC), a tribunal (Kuala Lumpur War Crimes Tribunal or KLWCT) consisting of five judges with judicial and academic backgrounds reached a unanimous verdict that found George W. Bush and Tony Blair guilty of crimes against peace, crimes against humanity, and genocide as a result of initiating the Iraq War in 2003, and in the course of maintaining the subsequent occupation.

The proceedings took place over a four day period from November 19-22, and included an opportunity for court appointed defense counsel to offer the tribunal arguments and evidence on behalf of the absent defendants, who had been invited to offer their own defense or send a representative, but declined to do so. The prosecution team was headed by two prominent legal personalities with strong professional legal credentials: Gurdeal Singh Nijar and Francis Boyle. The verdict issued on November 22, 2011 happened to coincide with the 48th anniversary of the assassination of John F. Kennedy.

The tribunal acknowledged that its verdict was not enforceable in a normal manner associated with a criminal court operating within a sovereign state or as constituted by international agreement, as is the case with the International Criminal Court or by acts of the United Nations as occurred in the establishment of the ad hoc International Criminal Tribunal for former Yugoslavia. But the KLWCT followed a juridical procedure purported to be operating in a legally responsible manner, which would endow its findings and recommendations with a legal weight that seems expected to extend beyond a moral condemnation of the defendants, but in a manner that is not entirely evident.

The KLWCT added two ‘Orders’ to its verdict that had been adopted in accordance with the charter of the KLWCC that controlled the operating framework of the tribunal:

1) Report the findings of guilt of the two accused former heads of state to the International Criminal Court in The Hague.

2) Enter the names of Bush and Blair in the Register of War Criminals maintained by the KLWCC.

The tribunal accompanied these Orders by adding recommendations to its verdict:

1) Report findings in accord with Part VI (calling for future accountability) of the Nuremberg Judgment of 1945 addressing crimes of surviving political and military leaders of Nazi Germany.

2) File reports of genocide and crimes against humanity at the International Criminal Court in The Hague.

3) Approach the UN General Assembly to pass a resolution demanding that the United States end its occupation of Iraq.

4) Communicate the findings of the tribunal to all members of the Rome Statute (governing the International Criminal Court) and to all states asserting Universal Jurisdiction that allows for the prosecution of international crimes in national courts.

5) Urge the UN Security Council to take responsibility to ensure that full sovereign rights are vested in the people of Iraq and that the independence of its government be protected by a UN peacekeeping force.

The Anti-War Campaign of Mahathir Mohamed

These civil society legal initiatives are an outgrowth of a longer term project undertaken by the controversial former Malaysian head of state, Mahathir Mohamed, to challenge American-led militarism and to mobilize the global south to mount an all-out struggle against the war system.  This vision of a revitalized struggle against war and post-colonial imperialism was comprehensively set forth in Mahathir’s remarkable anti-war speech of February 24, 2003, while still Prime Minister, welcoming the Non-Aligned Movement to Kuala Lumpur for its 13th Summit. Included in his remarks on this occasion were the following assertions that prefigure the establishment of the KLWCC and KLWCT:

War must be outlawed. That will have to be our struggle for now. We must struggle for justice and freedom from oppression, from economic hegemony. But we must remove the threat of war first. With this Sword of Democles hanging over our heads we can never succeed in advancing the interests of our countries. War must therefore be made illegal. The enforcement of this must be by multilateral forces under the control of the United Nations. No single nation should be allowed to police the world, least of all to decide what action to take, [and] when.

Mahathir stated clearly on that occasion that his intention in criminalizing the behavior of aggressive war making and crimes against humanity was to bring relief to victimized peoples, with special reference to the Iraqis, who were about to be attacked a few weeks later, and the Palestinians,who had long endured mass dispossession and an oppressive occupation. This dedication of Mahathir to a world without war was reaffirmed through the establishment of the Kuala Lumpur Foundation to Criminalize War, and his impassioned inaugural speech opening a Criminalizing War Conference on October 28, 2009.

On February 13, 2007, Mahathir called on the KLWCC to prepare a case against Bush and Blair, whom he held responsible for waging aggressive warfare against Iraq. Mahathir, an outspoken critic of the Iraq War and its aftermath, argued at the time that there existed a need for an alternative judicial forum to the ICC, which was unwilling to indict Western leaders, and he was in effect insisting that no leader should any longer be able to escape accountability for such crimes against nations and peoples. He acknowledged with savage irony the limits of his proposed initiative: “We cannot arrest them, we cannot detain them, and we cannot hang them the way they hanged Saddam Hussein.” Mahathir also contended that “The one punishment that most leaders are afraid of is to go down in history with a certain label attached to them…. In history books they should be written down as war criminals and this is the kind of punishment we can make to them.” With this remark Mahathir prefigured the KLWCC register of war criminals that has inscribed the names of those convicted by the KLWCT. Will it matter?

Does such a listing have traction in our world? Will future leaders even know about such a stigmatizing procedure? I think civil society is challenged to do its best to build ‘negative’ monuments in the public squares of global consciousness constructed with a deliberate intent to disgrace those guilty of crimes against peace and crimes against humanity. For too long our public squares have been adorned with heroes of war!

In his 2007 statement, Mahathir promised that a future KLWCT would not in his words be “like the ‘kangaroo court’ that tried Saddam.” Truly, the courtroom proceedings against Saddam Hussein was a sham trial excluding much relevant evidence, disallowing any meaningful defense, culminating in a grotesque and discrediting execution. Saddam Hussein was subject to prosecution for multiple crimes against humanity, as well crimes against the peace, but the formally ‘correct’ trappings of a trial could not obscure the fact that this was a disgraceful instance of ‘victors’ justice. Of course, the media, to the extent that it notices civil society initiatives at all condemns them in precisely the same rhetoric that Mahathir used to attack the Saddam trial, insisting that the KLWCT is ‘a kangaroo court,’ ‘a circus,’ a theater piece with pre-assigned roles.

The KLWCT did, I think, make a mistake by establishing a defense team for Bush and Blair, and then failing to present their best possible arguments. Instead, a sheepish defense based on their acknowledging human failings for engaging in criminal conduct did create an impression that this ‘tribunal’ was not assessing the legal merits of the charges, but merely in reinforcing the preordained guilt of these particular individuals. In reporting on the defense effort, the following excerpt is illustrative of this self-discrediting aspect of the approach taken by the KLWCT:

Lead Defense Counsel continued, “Had George W. Bush said, ‘we know who you are, we know what you did, and we forgive you,’ the world could have been a much different place.  But, instead, Afghanistan, Iraq, Guantanamo happened.  We are fallible human beings.  We make mistakes. And the Defense stated that the defense of Bush and Blair defense is that the accused ‘are human.’”

Such a mock atonement, which does not correspond with the continuing effort of these former leaders to justify their Iraq War policy, was entirely inappropriate and erodes both the persuasiveness and credibility of the undertaking. It may be that an empty chair would have been the most suitable way to acknowledge the absence of the defendants from the courtroom, despite being given an opportunity to present their best defense, or if it was decided to mount a defense on their behalf, then it should have done as skillfully and persuasively as possible.

The KLWCT has already announced a subsequent session devoted to the torture allegations directed at such American political leaders as former Vice President Dick Cheney, and former Secretary of Defense Donald Rumsfeld. Hopefully, the question of how to handle absent defendants will be handled in a better manner. The basic choice is whether to mount a genuine defense or to forego a defense on the belief that the purpose of the tribunal is to document the allegations and to pass judgment and overcome the refusal of governmental and inter-governmental judicial institutions to address such geopolitically sensitive issues. It is not clear whether the KLWCT effort to imitate the criminal procedures of tribunals constituted by the state system is the best model for these civil society initiatives. Perhaps, it is time to evolve distinctive language, norms, institutions, and procedures that reflect both the populist foundations of a jurisprudence of conscience.