The Troubling Case of Saif Gadhafi 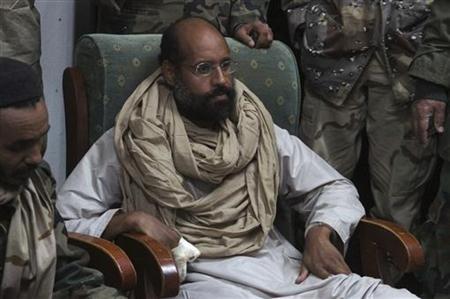 Zintan, LIBYA — Despite the claims of the National Transitional Council of Libya (NTC) that Saif al Islam Gadhafi, the apprehended subject of an International Criminal Court (ICC) arrest warrant that ordered his transport to The Hague, is in a secure hidden location near Zintan, Libya, a town approximately 85 miles southwest of Tripoli, this is not the case. 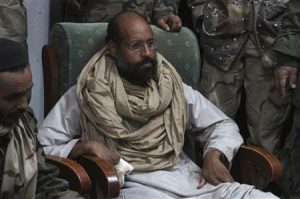 Neither are the assurances by Steven Anderson, spokesman for the International Committee of the Red Cross (ICRC) who on November 23 announced that Saif al-Islam’s injuries had been “taken care of,” nor his profuse assurances that Saif is in good health.  In point of fact, following the ICRC assurances, the Ukrainian-born Doctor Andrei Murakhovsky, who lives in Zintan, reported that “Saif’s wound is covered with gangrenous tissue and necrotic tissue.”  He added that “This wound is not in good condition and requires amputation. His index finger has been ripped off at the level of the middle phalange (finger bone), the bones are all shattered. It’s the same thing with the thumb of that hand.” Dr. Murakhovsky told the Reuters news service.

The morning of November 24, Libyan NTC Prime Minister Abdurrahim El-Keib still insisted that “Saif al-Islam is receiving the best possible treatment, but for now he is not in the hands of the provisional central government and we don’t know where he is.”

Regarding Saif al Islam’s “secure and hidden location”, most people in the village of Zintan know where he is being held, as does this observer, who visited a motley group of B-western movie types who are currently guarding and “protecting” Saif.

Although armed with a Power of Attorney from one of Saif’s family members to visit him, the group refused my request to visit Saif with the excuse that they had to consult their commander who was not expected to return for a few days since he was now the new NTC Libyan Defense Minister.

On the question of Saif’s health, there is increasing concern also because his guards claim they cannot take him to Zintan’s only hospital because someone would likely kill him in order to collect on the substantial rumored Qatar/NATO offered cash reward for whoever assassinates him thus presumably helping “the new Libya” and its allies avoid a messy trial.

Meanwhile, after what he claims in a change of heart, the ICC Prosecutor, Luis Moreno-Ocampo, now professes that Libya, not The Hague, is the best place after all for Saif al Islam and his trial. Since its establishment by the United Nations in 2002, the ICC has had just one Prosecutor, Luis Moreno-Ocampo. To the reported expressed relief of many international defense lawyers, several ICC staff and ICC judges, plus legal commentators familiar with his prosecutorial work, the ICC will have his successor chosen next month in New York.  This coming weekend in New York, the legal defense organization, Avocats Sans Frontiers (ASF, or Lawyers Without Borders) will meet in order to try to agree on a successor to propose to the 18 ICC Judges who will decide.

Prosecutor Ocampo’s visit this week to Libya caused some raised eyebrows among the groups noted above when he suddenly announced that the ICC would not invoke its UN Security Council-granted power and proceed with Case # ICC 01/11. This case was opened at the ICC on March 3, 2011, having been assigned to the ICC by the UN Security Council following the preceding month’s uprising in Benghazi, Libya.

Speculation among some in The Hague, in Libya and from ASF lawyers is that knowing that he would not be re-elected for another term as ICC Prosecutor, due to among other reasons he has not won one case during his 9 year term, has repeatedly incurred the wrath of ICC judges for bringing cases which they ruled lacked sufficient evidence and his penchant for self-aggrandizing publicity and making inaccurate claims about cases and defendants that border on judicial misconduct, Ocampo decided to switch horses.

One egregious example of his making false representations is the current ICC case involving Saif al-Islam Gadhafi in which Ocampo made several inaccurate headline-grabbing statements over the past several weeks claiming to be negotiating “indirectly” with Saif al Islam to give himself up to the ICC. Saif has emphatically denied Ocampo’s grandstanding claims and presumably, were Ocampo to attempt to personally prosecute his case Saif’s legal team would immediately file a motion to replace Ocampo for cause, as provided by ICC rules.

Given these problems, Ocampo, according to someone who accompanied him during his visit this week to Libya, decided to accept a lucrative offer from the NTC to advise the oil-rich country on setting up a legal system to try Saif al Islam and others.

The assurances by Moreno-Ocampo, NATO officials and American UN Ambassador Susan Rice that Libya is currently fully capable of currently handling trials of former regime loyalists are nonsense. Rice exhibited ignorance and surprise here last weekend when she claimed not to know that Libya had the death penalty and would apply the death penalty in the ICC case if given the chance.  The Libyan public’s apparent preference is for the death penalty by hanging in the two Libya ICC cases. This was the case with Rwanda, which is one reason the Ruanda Tribunal did not allow the government of Rwanda to conduct certain trials even though that government assured the UN it would not actually carry out a death penalty sentence. Libya has offered no such assurances to the ICC against the use of the death penalty nor has it submitted a legal challenge to ICC jurisdiction over the Saif al Islam or Abdullah Sanussi cases, as the Rome Statute requires.

Despite switching jobs, Ocampo has not lost interest in prosecuting the Saif al Islam case which he views as his best chance of finally winning at least an ICC related case, but not at The Hague where there is the possibility that Saif would not be convicted, given Court rules of procedure and ICC legal staff resources that would actually assist an accused in presenting his defense before the court.  Ocampo is said to be betting on gaining a victory in Saif’s high profile case by working with the NATO-created NTC government in Libya and running the prosecution as a behind the scenes “consultant” and helping Libya’s NTC keep the UN and ICC at bay while allowing the NTC to try both Saif’s case and that of Abdullah Sanussi if and when the latter is proven to have been captured.  Ocampo is said to relish the job of becoming the “Father of Libya’s new legal system.”  Ocampo is now explaining that it was never his role “to tell Libyan officials how to hold a fair trial and the  standard of the ICC is that it has to be a judicial process that is not organized to shield the suspect and I respect that it’s important for the cases to be tried in Libya.”  He then added, “There are so many different traditions; it is difficult to say what is a fair trial.”

No sooner had the surprising news and Ocampo’s sudden vagueness about what constitutes a fair trial begun to ricochet around the Internet than this observer received an email from an international criminal lawyer whose office is two blocks from the Carl Moultrie Courthouse in Washington, DC. The American lawyer was appalled: “Paying Ocampo as a consultant for the new Libyan government on criminal trial procedures is a ridiculous thought/idea.  He has no idea of fair trial rights and has not achieved a conviction in his nearly 9 years at the ICC.”

Nor were the ICC judges thrilled at the perceived betrayal.  The ICC quickly fired off a reminder to Ocampo, to the new Libyan government and the media that it is the ICC judges, and not the ICC Prosecutor, who will decide whether a case will be held in The Hague or in the country where the alleged crimes occurred and only they will decide if Libya has the ability to conduct a fair trial. The ICC is signaling that the Ocampo-generated international headlines to the contrary notwithstanding, the issue of trial venue in Libya has not settled in ICC case # 01/11.

Prosecutor Ocampo knows well that once the ICC decides to open an investigation of a case, national courts may not investigate that case and are relieved from their obligation to do so. In addition, since the ICC has issued an arrest warrant against Libyan defendants, all states—including Libya—are obliged to cooperate fully with the Court. Following  the public dressing down from The Hague, Ocampo has now retreated a bit and told CNN on November 23 that: “ The only condition is the new Libyan government has to present their position to the International Criminal Court judges and the judges will decide if the case can be prosecuted in Libya. Libya will present evidence to ICC judges that the country can hold the trial, and the judges will decide if they are satisfied,” Ocampo explained.

The ICC, if it takes up the question as expected, should rule in the developing Saif al Islam case, precisely as the International Criminal Tribunal for Rwanda found in ruling against that country’s request for trial jurisdiction, although like Libya today, Rwanda claimed to have a “modern functioning court system.”   The reason is that an initial review of Libya’s criminal judicial system and discussion with Libyan criminal defense lawyers as well as with international criminal defense lawyers with years of experience in international tribunals’ practice, shows that it is very clear that persons accused of serious crimes in Libya currently do not have even the most minimal judicial rights that are required by international norms. Today Libyan defendants do not benefit from adequate legal representation, financial support for indigent accused, travel and investigation support for defense teams, or security for defense teams. Libya’s central and local governments place impediments curtailing defense teams in the discharge of their functions.

An admittedly cursory inquiry in Libya among lawyers here also reveals nonexistent or inadequate accommodation and transport arrangements for witness, as well as a lack of arrangements for protection of witnesses before, during and after testifying in court. In addition, the NTC is engaging in a pattern of threatening potential witnesses preparing to testify against NATO in another case. Similarly the NTC is failing to provide safe and secure travel for Libyan witnesses living abroad, including in Algeria, Tunisia, Mali, Niger, and Egypt. Interviews with Libyan lawyers and officials as well as visits to detention facilities in Libya reveal that conditions are not in compliance with international standards and that there is widespread torture of prisoners in Libya and threats against the families of prisoners.

One could wish Luis Mareno-Ocampo good luck in his new career as would be “Father of the New Libya’s Legal system,” but the current ICC case # 01/11 is too critical for all involved to wait to learn whether his project gets completed and meets international standards.