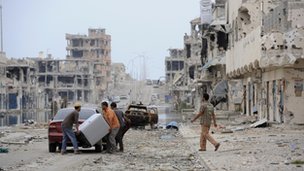 “Everyone Says We are Rich. Then Why Do We Feel So Poor?”

They discussed the possibility that Libya may experience what the Congo went through after the fall of the dictator Mobutu. Samal noted some parallels and the possibility that Libyans may actually regret Gadhafi’s departure as many in the Congo have misgivings regarding the absence of the 33 year rule of strong man Mobutu, since Gadhafi also gave his fractionalized country a sort a unity, a sense of being Libyan, free education, free medical aid, subsidized housing and woman’s rights — all of which could now be in jeopardy.  Ahmed explained:  “OK, we are ‘free’. Now what?  Everyone says we are rich.  Then why do we feel so poor? What kind of government will we have?  I favor a strong unitary government like Patrice Lumumba did in the Congo.  Many want a federal system. We have to build.  Now our biggest challenge is our leadership vacuum. Are we going to regret that Gadhafi is gone? For sure many will.  Not all rebels hated Gadhafi but they hated his henchmen who were out of control and had created their own small empires.  That is why many are now saying that the new government must not include any Gadhafi former henchmen.   They were the main problem, not Gadhafi himself.”

This observer’s hosts shared many amazing photos they had taken on their camera phones over the past months.  Showing a photo of bearded fighters Ahmad commented that western media saw these beards and immediately concluded “Al Qaeda!” “This is not true at all and we laughed when we saw these false reports.” He continued, “The reason the media saw so many beards is for the simple reason that we did not have time to shave.  If I have some free time I will clean my weapon or rest, not shave.  Now as you see I have no beard.  Same thing with many of my friends.  Yes there are plenty of Al Qaeda among us.  And I want to add that each Al Qaeda fighter is worth 100 of us during battles.  They are very well trained and very expert with explosives.  I don’t know how they can do what they do with simple devices, plus they are not afraid to die. But they are not in control here in Libya.  Whether they will be eventually, time will tell.”

They all expressed concerned about the growing influence of the Persian Gulf country of Qatar, which they acknowledge sent the rebels millions of dollars, weapons, and fighters and used their aircraft against Gadhafi loyalists while they favored the Salafist groups.

My hosts expressed their exasperated concern over what they see as the deep political vacuum in Libya that is considered harmful and dangerous for national unity. Their strongly presented opinions were that a new legislative assembly needed to be launched within the next several months and much sooner than the NTC is suggesting with multi-party elections put off until 2013.

The fighters thought there was no possibility that any rebel militia would give up its arms anytime soon. One of the group insisted, “I will not turn in any of my weapons, and I, like my friends, have hidden a lot of them, including shoulder-fired missiles. I will keep them until I am convinced that the new government  truly serves the people.”

They discussed who will command the new national army and that it will be a difficult decision and may lead to internal armed conflict.

They reflected on the fact that Gadhafi still has lots of supporters both in Libya and throughout Africa, and my hosts all thought that the newly formed loyalist “Libya Liberation Front” (see my recent report) could become a major force in the coming months. They recommended dialogue with the LLF, something the Obama administration and NATO consistently vetoed with the Gadhafi regime over the past eight months. They acknowledged that dialogue between the Libyan government and the rebels during March could have avoided the tragedy that unfolded during the subsequent seven months.

The following week, additional confirmation was received by this observer from multiple credible sources confirming that between November 10 and 16, the 28 NATO member countries had been instructed by NATO headquarters that if their embassies received a visa application from any Libyan citizen seeking to visit their country, the NATO country embassy is instructed to freeze the application. Within 24 hours, the embassy is to send a copy of the visa application and one of the two required photos submitted with the application to INTERPOL for the possible issuing of a “red notice”, meaning arrest and detention of the applicant, preliminary to a decision from the NTC with respect to an extradition request for the person to be sent back to Libya.  Abdel Hafiz Ghoga, deputy chairman of Libya’s National Transitional Council, is the force behind this decision according to Tripoli sources. This NATO project clearly demonstrates that NATO has not ended its aggression against Libya, and it is fundamentally illegal and constitutes refoulement, which under international law is the forced return of a person to a country where he or she faces persecution. To date, international human rights organizations have been mute on this project.

One such affected person, with whom this observer recently visited outside of Libya, is subpoenaed to attend a November 27 court hearing in Brussels as a witness against NATO for that organization’s June 20 slaughter of the Khaled Hamidi family from Sorman, Libya. The family home was obliterated by three American MK-83 1,000 lbs. bombs and two missiles. The reason, according to NATO, without offering a scintilla of evidence to support its spurious allegation, was that this family’s home was a command and control center for Gadhafi loyalists (one of 49 unproven C & C Centers claimed by NATO Brussels-Naples media briefings over a seven month period).

Those murdered on June 20 by NATO included: Khaled Hamedi’s  pregnant wife, Safa; their three years and one day old son, Khweldi; their four and one half year old daughter, Khaleda; their six year old nephew, Salam; and 13 family members and friends who were all staying overnight at their home following the celebration of their son’s third birthday.

Meanwhile, in the US Congress on November 15, Senators John Kerry, Joe Lieberman, John McCain and Marco Rubio, co-sponsored Senate Bill 317, the purpose of which is to praise US and NATO forces for their “extraordinary bravery and professionalism.”

As the horizon cracked with red rays from the rising sun, our group dispersed.  I walked alone through some of the streets of Sirte among the totally obliterated buildings where not even a feral cat was to be seen. Still stunned from what I had heard from the “rebels” overnight and the similarity of their views with what I learned this summer in the pro-Gadhafi western parts of Libya, I felt numb.

And I wondered, “What for the love of God were these months of gratuitous and immoral NATO carnage all about?”

A bad moon is rising over Great Sirte Bay.