Doing an Iraq to Iran 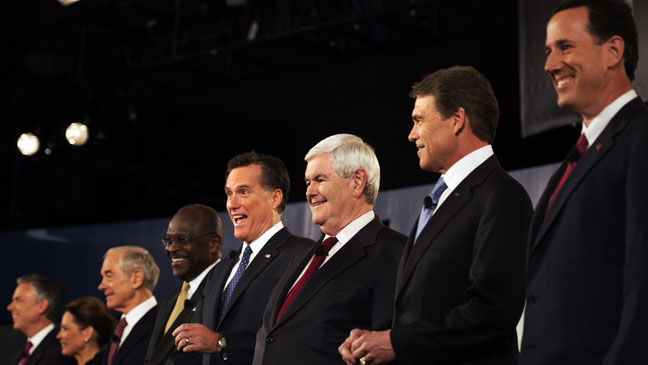 Numerous Republican candidates for the presidency indicated they would be willing to launch war against Iran, the exceptions being Herman Cain and Ron Paul, the latter of whom compared the warmongering to the propaganda and lies that precipiated the war on Iraq. (Getty Images)

What happened in Iraq eight years ago appears all set to repeat itself as the Western powers gang up against Iran. And you thought the world has learnt its lessons from the catastrophe of Iraq. 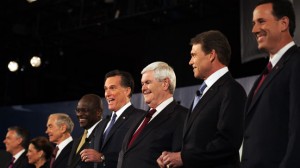 Numerous Republican candidates for the presidency indicated they would be willing to launch war against Iran, the exceptions being Herman Cain and Ron Paul, the latter of whom compared the warmongering to the propaganda and lies that precipiated the war on Iraq. (Getty Images)

Savaged by the trillion dollar wars being waged by the US and its NATO allies, coupled with the open looting and corruption on the Wall Street, the world economy is battling for its life.  Look at the god-awful mess in Europe. Who would have thought a decade ago, or at the time of Western invasion of Iraq and Afghanistan, the rich European Union and its much wanted euro would be faced with the calamity they are facing today? Even the with-us-or-against-us leader of the free world, who had persuaded himself he was on a divine mission to save Israel from its imagined enemies, seemed to have his share of doubts about the whole circus when he left the White House.

Of course those weapons of mass destruction that Saddam Hussein was supposed to have piled up to attack the peace-loving, democratic state of Israel are yet to be found, not to mention the million plus Iraqis who have paid with their lives for the Oedipal insecurities of the most powerful man on the planet.

Yet here we are back once again sleepwalking, eyes wide shut, towards yet another calamitous showdown. It’s déjà vu all over again as the Goebbelsian propaganda machine bombards us with the characteristically disingenuous fiction masquerading as ‘facts’ and ‘expert opinion’ about the clear and present danger the world faces in Iran.

Just as the UN and its numerous experts were used to build the case against Iraq, IAEA’s services are being employed today to corner Tehran. In its latest report, the UN nuclear watchdog suggests Iran may have developed necessary knowhow and expertise to build a nuclear weapon after receiving “critical support from foreign scientists.” Since when has knowledge become a crime?

In doing so, the IAEA has trashed its own findings and numerous reports by its experts presented over the past decade following endless visits to Iran’s nuclear sites, ruling out the possibility Tehran is working on the bomb—a fact corroborated by America’s own intelligence agencies in the 2007 National Intelligence Estimate.

The latest IAEA report is based on the ‘evidence’ provided by a Russian scientist, who is supposed to have helped the Iranians in building the detonation system for nuclear weapons, and data found on a stolen laptop! Russia, which has helped Iran with its nuclear power program over the years, has dismissed the claim and IAEA report with utmost contempt.

Tehran has of course rejected the IAEA report as being stage-managed by the West. Considering the US contributes 26% of the IAEA’s annual budget and has many US officials serving in senior positions, the Iranian claim is hardly exaggerated, especially after the Russian “nuclear weapons expert” has turned out to be a specialist in the production of nanodiamonds!

The IAEA, instead of enforcing Nuclear non-Proliferation Treaty (NPT) and confronting big powers on their hoards of nukes, is increasingly acting like a US government outfit.  Unlike Israel, North Korea, India and Pakistan, Iran is a signatory to the NPT and has allowed regular international inspections of its nuclear sites.

But we have been here before, haven’t we? In the run up to the Iraq invasion, many such experts were produced out of Uncle Sam’s hat.  From the fiction of Iraq sourcing uranium from Niger to Blair’s claim of Saddam being within the 45-minute striking distance of a WMD attack on the UK, the history of colonial deceptions is endless.

And thanks to the blessings of Internet, every blatant lie and every piece of the charade that passes for international diplomacy in the run up to the Iraq 2003 has been preserved for posterity. Just Google and see for yourself.  The resemblance with Iran 2011 is uncanny.

The same saga of subterfuge and plotting continues against Iran, notwithstanding the historical irony that it was the US—and Israel—that had helped Tehran build its nuclear program in 1970s, in an attempt to check the Arabs. Indeed, Israel was supposed to supply Reza Shah Pahlavi with missiles and nuclear warheads.

The program was abandoned in haste when the people power threw the Shah out in 1979, forcing him to seek refuge with the very Arabs he loved to hate. His old friends in the West had spurned him, just as they recently abandoned Hosni Mubarak, Ben Ali and Qaddafi.  The Shah died a broken man in Cairo in 1980, only a year after the Revolution.

What cruel irony of history that today the same Arabs are being hammered into believing that the Islamist Iran, and not Israel and its powerful partisans with a large nuclear arsenal and a long history of aggression, is their worst enemy!

For eight long years, George W Bush and the fellow crusaders obsessed over Tehran dreaming of doing an Iraq to Iran. Not because the long sanctioned Iran with its archaic weaponry and crippled economy was a threat to world peace but because Israel said so. Indeed, but for the “shock and awe” that the empire faced in Iraq and Afghanistan, Iran might have been the third front in America’s war.

And the irony of ironies, the man who as a senator voted against the Iraq invasion eight years ago, is now parroting and reading from the same hymn sheet that his predecessor did.  The script of the Middle East’s theater of the absurd remains unchanged; only dramatis personae have changed.  As Scott Ritter, the former UN weapons inspector who exposed his own government’s game on Iraq, puts it, it’s the same bull**** with a different president!

So as Israel steps up the beating of war drums on Iran with the politicians in the US competing with each other to woo the Zionists, can Obama afford to be left behind? So promising more ‘effective’ sanctions against an already much punished country over the past 33 years, he thunders ‘all options are on the table,’ reminding one of W’s rhetoric. So much for the audacity of hope!

The irony of it all may not be entirely lost on the Nobel laureate president. But with the reelection battle fast approaching and all Republican hopefuls, except Ron Paul and Herman Cain, promising to hit Tehran, how can Obama not suck up to the J Street? The rejection of the Palestinian state was part one of the strategy for the Jewish vote and money. An attack on Iran would seal the pact with the devil.  Meanwhile the world stands and stares in morbid fascination.