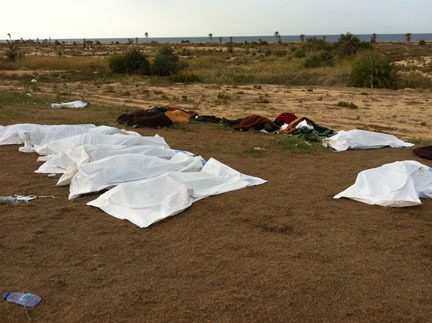 The “new Libya” has entered its own “Terror” which is spreading inexorably, aided by NATO member states including American, French and British SAS units known locally as “disappearance squads”. This is one of the rapidly developing consequences of the UN’s rush to “protect Libya’s civilian population” last spring.

And it is why human rights investigators are arriving in Benghazi, Libya this week. 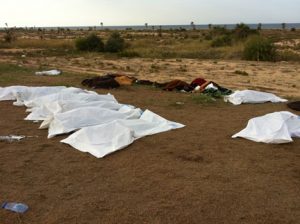 “Approximately 1,085.92082238 kilometers or roughly 600 miles from Cairo to Benghazi”  is what the lovely travel agent  who works a couple of doors down from  the Swedish Café off Tahir Sq reported as she  smiled and wanted this observer to take a fancy high rise double decker luxury bus to Benghazi where I was headed from Cairo.  In the end I settled for sharing a dump truck at one-third the cost across the Egyptian and Libyan desert to the Courthouse in Benghazi.  It didn’t seem such a bad idea following meetings in nearby countries, especially considering alternative routes which would have involved flying to Tunis, then another flight to Jerba and then the six hours jammed service ride to Tripoli. I had been there and done that more than once and needed to leave right away to meet some people who were being held in one of Benghazi’s teeming jails.

Until the NTC announced changes yesterday, anyone bearing  an American passport did not need a visa to enter Libya, so grateful has been the NTC for all the financial help that American taxpayers, largely unknowingly, have supplied to NTC officials in addition to presenting  them  with a country with vast  oil reserves and zero national debt.

One of the fortunate language usages in this part of the world is the liberal transliteration tolerances applied to Arabic which helps those challenged by the language.  As is widely known there are many ways to write Arabic words in roman characters and most are accepted.  But one has to listen carefully in Libya these days to grasp the important distinction between certain English words when referring to the fate of increasing numbers of supporters of the Gadhafi regime.  In the current atmosphere one often hears that someone “has disappeared”which, depending on one’s political views is usually good news and it means the person is in hiding or left the area or fled the country to safety.  Alternatively, it might be said that a person “is disappeared” meaning that she or he was caught by the new regime and is gone, probably, forever without a trace for loved ones to pursue.

Following meetings with Libyan evacuees (disappeared) from NATO’s nine months of bombing who are now present in nearby countries  and from meetings  inside Libya with incarcerated former officials and some of their family members as well as fugitive opponents of the new “government” it is clear that the current period is cascading into  paroxysmal revenge attacks and political cleansing.

Those increasingly being targeted by “disappearance squads” are family members and associates, even former domestic employees such as gardeners, handymen, and household staff of former regime affiliates.  Homes, cars, furniture, of former regime affiliates are being systematically confiscated. Torture has become the normal means to elicit information regarding the whereabouts of individuals thought to still be supporting the former regime. The reason, according to one former Libyan official who barely escaped one of the French squads and who now resides in Egypt, “is the same reason drones are so popular with your US military, torture works.  Not 100% but it’s better than the other options.”

There appears to be a tell-tale paranoia settling in among some NTC elements who believe that if there is one Gadhafi supporter left in Libya it might mean the return of his ideas for Libya’s role vis-a-vis the West and its re-colonization of Africa plans, control of Libya’s natural resources and its relations with the rapidly changing Middle East.

Even Libya’s NATO-managed NTC members are worried that they may be investigated by the International Criminal Court after its prosecutor said allegations of crimes committed by NATO in Libya would be examined “impartially and independently.”  Some western lawyers currently in Libya who are here to help victims of NATO crimes are oddly being approached by members of the new regime for discussions relating to the possibility that the ICC may come after them.  This is also one of the reasons why rumors that Saif al Islam is about to surrender to the ICC are false.  Saif is being advised to wait and rest because the ICC case will collapse as more facts of NATO crimes surface.  Former Libyan officials in hiding are also well advised to stay safe if possible as time may be on their side.

Government officials of countries bordering Libya are being advised to allow sanctuary for supporters of the former Libyan government and to refuse extradition requests because activity currently taking place in The Hague may well pre-empt a war crimes investigation.

Tunisia is today under great pressure from NATO not to change its mind and not to decline the NTC extradition request for Libya’s former Prime Minister Baghdadi al-Mahmoudi.   NATO is concerned because American lawyers recommended last month that Baghdadi apply for U.N. political refugee status with the UN High Commissioner for Refugees to try to prevent his extradition from Tunisia. On 11/11/11, the UN acknowledged receipt of Dr. Baghdadi’s petition and informed intermediaries that it is being seriously considered.  UNHCR has a good record in similar cases but needs to pressure Lebanon with respect its outrageous treatment of a quarter million Palestinian refugees, now suffering debasement for over 63 years.

Other reasons the NTC and NATO are concerned is that there is currently being undertaken in the Hague an encompassing internal legal review of all incidents in which NATO bombing or other NATO or NTC actions caused civilian casualties. An American led team is nearing completion of its six month investigation which is expected to be forwarded to the ICC and made public soon

A main reason former interim Prime Minister Mahmoud Jibril resigned recently, and others will, is the pressure he has been under from Islamists and many others who remember his record as the former regime’s Minister of Justice and Jibril’s concern that he may be investigated himself by the ICC for many decisions he has made over the past eight months that are now coming to light.  Following his statement about how Muammalr Gadhafi was killed after he was taken into custody alive, which constituted a clear war crime, Jibril is now claiming that it was not him who gave the order to assassinate Gadhafi or even Jibril’s former friend, General Younnis, but rather as he explained at a news conference yesterday, amid snickers from assembled journalists,  that “a third party maybe a State, or a President or leader in any way who wanted Gadhafi killed, so as not to reveal the many secrets that only Gadhafi could have known.”   Jibril did not have to mention that Gadhafi knew many secrets about himself and other NTC officials and he is not alone among NATO and NTC officials in fearing an ICC investigation.

It is this atmosphere that is significantly fueling the terror across Libya.