Libya’s Curse of Black and White

Libya has been a conflict painted in two immiscible colors; the resulting canvas creating a messy but polarizing dichotomy, a “you’re either with us or against us” mentality. Its complexities have been plagued in false syllogism; opposing NATO equals unconditional support for Gaddafi and endorsing authoritarianism. Many on the Western Left have been caught between a rock and a hard place; their anti-imperialist politics seemingly at odds with his flagrant human rights abuses against dissidents, but also acknowledging Gaddafi’s brutishness and resistance in the face of Western hegemony in the Maghreb. Some passionately side with one or the other. Others, myself included, canter in between. The problem with the prevailing winds of thought is that media-manufactured opinion by major news networks has made people assume that saying one thing automatically means something else.

Gaddafi did many things which were both good and bad.

He came down hard on dissidents, executed those who did not see the merits in the Jamarriyah, and, in his later years, began to make more and more economic concessions to Western companies. He was an eccentric figure who would often surround himself with ‘beautiful’ women, which he justified in a narrative of female emancipation. He funded groups like the Columbian FARC, gave semtex to the IRA, and many photos see him clutching the hands of Yasser Arafat, George Habash, and Nelson Mandela. He was a well-intentioned servant of Nasser, a loyal protégé who tried to unite both the Arabs and Africans. He massively improved the status of Libya’s GDP and literacy rates to the front of the queue in his continent, earning him the honorific title of the ‘King of Kings.’ In his later years, whilst still maintaining his allegiance to his anti-Western rhetoric, he joined them in the fight against terrorism. He ruled for over forty years but always maintained that he could never ‘step down’ because Libya’s sovereign power was invested in the people. He gave baffling but charismatic speeches at the UN, where he tore the charter, blamed the rebellion in Libya on Al-Qaeda administered hallucinogens, and had an unusual infatuation with Condoleezza Rice.

In very much the same vein as Western leaders would do with their own, he protected Al-Megrahi from being extradited for the Lockerbie bombings until, unlike the West, he gave him up. He cared for his people but many times, he called and even witnessed their executions. He is a man of many paradoxes and contradictions, perhaps well-intentioned, but also ruling with an iron fist.  There can be no doubt, he has left a popular legacy and many parts of Libya would and did die for him.

NATO has been seen both as the hero and the villain. As a confluence of penetrative Western interests, they have intervened and aided rebel forces in Libya, albeit, premised on a very tenuous legal mandate. They are like the worst kept secret in international relations, many fully aware of the fact that their help certainly does not come for free and often, if not always, at a scorchingly high and damaging price. At the start of the civil war, they were rightfully criticized for not taking sufficient enough steps to avoid civilian casualties.

Whose side therefore do we chose?

When discussing the politics of solidarity, we use the term ‘critical support’ (critical being the crucial word here) in which we’ll support any indigenous resistance movements or governments which are hostile to invading, imperialist forces, even though ideologically, we may not share all or some of the same values (this excludes fascist/racist resistance movements). The mandate comes, not from analogous political values, but rather from the shared suffering of those being oppressed, and in our spirit of solidarity we extend our support to them. This has often extended the secular Western Left’s support for various Islamic resistances groups in the Levantine region. We acknowledge that they are not the parties we would necessarily vote for, but that is beside the point. My question is therefore, why did the Western Left not extend this critical support to Gaddafi against a clearly imperialist NATO force?

I make no suggestion of support for Gaddafi, but it soon becomes apparent that Libya is not an example of ‘either-or’. Indeed, if we are playing a game of the lesser of two evils, NATO’s intervention is considerably more damaging. We are stuck in this muddy moral quagmire predominately because of the media’s manufactured consent; it is they that have produced this robust ‘either-or’ syndrome which does not imbue the complexities of what is happening in Libya.

As the dust begins to settle in Libya, from Tripoli to Benghazi, Ben Walid to Sirte, more and more worrying reports are beginning to emerge of how NATO-backed rebels had systematically lynched black and dark-skinned Libyans (people whom Gaddafi fiercely championed). The Western Left has largely been silent. In addition, human rights groups have unearthed mass graves of his supporters in Gaddafi’s home town. Anxieties are also beginning to materialize concerning the complexion of some prominent leaders in the NTC rebellion linking some with Al-Qaeda. To my knowledge, only RT News has shown any significant coverage of these incidents and invited speakers who have showcased the other side of the war. Worrying trends in Al Jazeera English’s coverage demonstrate a similar ignorance as Murdoch’s news corporations to the atrocities and reality on the ground. It is as if there are covering two different conflicts.

The few Libyans and Black Africans I have spoken with have, by and large, been critically supportive of Gaddafi. Some were unable to articulate an alternative, but this is more revealing than it may seem. The very hesitation highlights the intricacies and nuances of this civil war. As I write this, unconfirmed videos are beginning to emerge showing shots of NATO soldiers walking alongside rebels as they drag the motionless body of Gaddafi. They look expressionless as if to suggest some kind of complicity in his murder.

As we saw those graphic images of Gaddafi drowned in dark red blood, some networks choosing to televise his half dead carcass begging for mercy, the news networks were quick to show the signs of jubilation of the Libyan people waving the flags of the old King Idris. You cannot deny that many people are ecstatic, overwhelmed, euphoric. But so too were the executives. British company Hermes Datacomms almost immediately reopened operations in Libya. The people of Libya had not even officially declared their liberation and already the pound and dollar signs were lining the pupils of Western company bosses.

There is no doubt that many if not the majority are happy to see the demise and death of Gaddafi. Indeed, I could not help but be moved by the wealth of joy. But the romanticism of the Arab Spring has perhaps blinded some people, me included. I was never a supporter of Gaddafi, but that maybe because I knew very little about him. When I heard of the rebellion, my support was unabashedly with the uprising.

But time can be a mean friend.

As I learned more, the situation became layered and complex. Maybe this has less to do with this particular uprising and more to do with the ugliness of war—that there are not winners, just losers.

Libya occupied a space of exceptionalism in the Arab Spring. Their former leader was not in bed with foreign interests (or certainly not as much) as Mubarak and Ben Ali. The Arab Spring cannot be read in a one-size fits all approach. The struggle is indeed common but the spaces and climate in each of the countries is very different. This piece is not meant to convince people to think one way or another but rather, it is meant to get people to think. 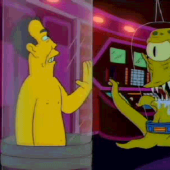 Tanzil-Zaman Chowdhury is an activist and research student at the School of Law, University of Manchester. His research involves looking at the principle of Equality in Israeli jurisprudence, the privilege of ideology in Israel and how this impacts on the Palestinian minority.