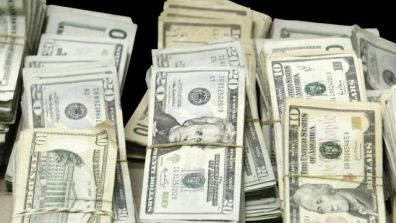 I have come to the conclusion that Big Brother’s subjects in George Orwell’s 1984 are better informed than Americans.

Americans have no idea why they have been at war in the Middle East, Asia, and Africa for a decade.  They don’t realize that their liberties have been supplanted by a Gestapo Police State.  Few understand that hard economic times are here to stay.

On October 27, 2011, the US government announced some routine economic statistics, and the president of the European Council announced a new approach to the Greek sovereign debt crisis.  The result of these funny numbers and mere words sent the Standard & Poor’s 500 Index to its largest monthly rally since 1974, erasing its 2011 yearly loss. The euro rose, putting the European currency again 40% above its initial parity with the US dollar when the euro was introduced.

On National Public Radio, a half-wit analyst declared, emphatically, that the latest US government statistics proved that the recovery was in place and that there was no danger whatsoever of a double-dip recession. And half-brain economists predicted a better tomorrow.

Europe is happy because the European private banks, the creditors of the European governments, have agreed to eat 50% of Greece’s sovereign debt and to be recapitalized by public money handed to them by the European Financial Stability Facility rescue fund.  The President of the European Council, Herman Van Rompuy, thinks that Greece’s debt is the only sovereign debt to be written down and that the debt of Italy, Spain, and Portugal will somehow be bailed out through other means, including a Chinese contribution to the EFSF rescue fund. Obviously, if all EU sovereign debt has to be cut by 50% as well, the rescue fund would not be up to the job.

For our corrupt financial markets, any news that can be spun as good news can send stocks up. But what are the facts?

For facts, one has to turn to serious people, not to the presstitute media. Among those who give us real facts is John Williams of shadowstats.com.  In his October 27 report, Williams exposes the happy second quarter 2011 economic growth figure of 2.5% as nonsense. Every other economic indicator contradicts the spin.

A country’s consumers cannot forever draw down savings or go deeper into debt. For an economy to recover, there must be growth in consumer income.  That growth is nowhere to be seen in the US.  A large percentage of the goods and services sold to Americans by American corporations are now produced abroad by foreign labor. Thus, Americans no longer received incomes from the production of the goods and services that they consume. The American consumer market is on its way out.

The Dow Jones rose 339.51 points on the phony good news, but consumer sentiment is in the basement. John Williams reports that “consumer confidence hit the lowest levels ever recorded in 2008 and 2009” and that consumer confidence has now “fallen back to that 2008 level.”  But the stock market boomed.  Somehow a population 23% unemployed with debt up to its eyeballs is going to spark an economic recovery.

Recovery can only happen in the delusional world created for us by the concentrated media. No longer permitted to utter one world of truth, the presstitutes proclaim non-existent recoveries and weapons of mass destruction and demonize Washington’s chosen opponents.

The sovereign debt crisis in Europe has distracted Americans from the much worst crisis in their country. After two decades of exporting US manufacturing and middle class jobs, and after a decade of consumer debt growth that has resulted in millions of foreclosed homeowners and massive credit card and student loan debt that cannot be paid, consumers have no income growth or borrowing capacity with which to fuel an economy based on consumer demand.

European banks, already ruined by purchases of Standard & Poor’s and Moody’s AAA ratings of junk derivatives, now find themselves threatened by sovereign debt. Greece’s debt crisis, caused with Goldman Sachs’ help in hiding the true debt of the country as was done for Enron, has brought to light that Portugal, Ireland, Italy, and Spain, in addition to Greece, have more debt than the governments can service.

In the EU, unlike the US and UK, which have their own central banks that can create new money to bail out the over-indebted governments, the EU central bank is prohibited by treaty from printing money in order to purchase bonds from member states that cannot be redeemed.

Regardless of the treaty prohibition, the EU central bank has been lending Greece the money to pay its bond holders. The imposed austerity that is part of the deal created political instability in Greece.

Now that European Council President Herman Van Rompuy has announced a 50% write-off by private banks of Greek sovereign debt, can the same treatment be denied Portugal, Italy, and Spain?

The European Central Bank is following the lead of the Federal Reserve and creating new money to bail out debt.  The cost will be paid in inflation and flight from the euro and the dollar. As an indication of the future, despite the positive spin on the news and the rise in US stocks, on October 27 the Japanese yen rose to a new high against the US dollar.