The Real ‘Theater of the Absurd’: Netanyahu and His Endgame in Palestine 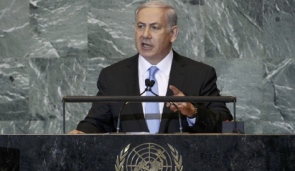 During his deliberately offensive speech on September 23, Israeli Prime Minister Benjamin Netanyahu described the General Assembly as “the theater of the absurd”.  Israel’s few friends at the United Nations—led by the US delegation—listened gleefully and applauded as Netanyahu heralded a steady stream of insults.

Netanyahu then returned to Israel with vengeance, enraged by the passionate international reception of Palestinian Authority’s statehood bid.

Despite every Israeli effort, the world community has long been united in its support of Palestinian rights.

For decades, Israel labored to legitimize itself, denying the very existence of Palestinians. Following its occupation of the rest of historic Palestine in 1967, it tried to validate its colonial project while concurrently targeting any political platform that represented the Palestinian people. This endeavor was unsuccessful, thanks in part to the resistance of the Palestinians themselves, but also largely due to the enduring international support.

The Palestinian people owe a great deal to the many countries that have refused to adhere to such notions as ‘might makes right.’ Over 100 nations embraced the PLO’s declaration of Palestine in 1988, and now, many more have been added to the list.

While Netanyahu is a rightwing zealot without a shred of respect for international law, he is also a pragmatic leader. He understands that international support for Palestinians and the growing isolation and the ‘delegitimization’ of Israel (a mainstream topic of discussion in Israel today) are still not enough to alter facts on the ground. They will not impede the construction of the illegal ‘Separation Wall’ or slow down Israel’s colonial ambitions. The reason for this is US support. The illegal colonies dotting the Palestinian landscape, in violation of many UN resolutions, are funded by US money. The Wall is also largely an American investment. Yes, in fact, the entire Israeli colonial project would have been unfeasible without US funding, political backing and the silencing of any country that tried to challenge this iniquitous paradigm.

Despite all the difficulties facing Netanyahu at home—social upheaval and mass protests—and abroad, Netanyahu remains well-composed, speaking in the tone of an emperor. His secret is not the prowess of his army, whose recent victories include the killing and wounding of thousands of Palestinian civilians in Gaza, nor the moral ascendancy of his logic (it doesn’t exist). Netanyahu is elevated by the full knowledge that there are many men and women in Washington D.C. who remain dedicated to the interests of Israel, even during this time of American economic, political, military, and even moral crises. Yes, in the minds of these individuals and organizations, Israel’s interests sadly trump US interests.

Keeping all this in mind, it seemed entirely incongruous that while Abbas was trotting the globe to harness support for his statehood bid, Israel did little on that front. Instead, it announced grand plans to finally isolate occupied East Jerusalem from the rest of the West Bank, to further expand existing settlements, to dig more trenches and erect more walls—not only in and around the West Bank and Jerusalem, but also around its border alongside Egypt.

Shortly after announcing plans to construct over 1000 units in the illegal Gilo colony (also referred to as ‘neighborhood’ by US and Israeli media), another ‘neighborhood’ of Givat HaMatos will be built. According to the Israeli anti-settlements organization, Peace Now, the latest announcement is particularly grave and is a “game changer that significantly changes the possible border between Israel and Palestine.”

“Unlike recent plans that caused controversy in Gilo and Pisgat Ze’ev which expanded the footprint of existing neighborhoods, the new plan creates an entirely new footprint of a new Israeli neighborhood in East Jerusalem, for the first time since the establishment of Har Homa in 1997 by the first Netanyahu Government.” (Peacenow.org., October 13)

With all fairness to Netanyahu’s government, the new construction, Plan no. 14295, is an expanded version of Plan no. 5834A, which was made public during the term of former Prime Minister Ehud Olmert in 2008. It is a fact that all Israeli governments since ’67 have carried out illegal settlement construction in Palestine, in violation of the Fourth Geneva Convention and many clearly-worded UN resolutions.

The newest Israeli violation of international law is part of a decided Israeli action to speed up its projection of the endgame in Palestine. Shortly before the public announcement concerning Givat HaMatos, Netanyahu announced, on October 11, “the establishment of a new committee charged with finding ways to legalize settlement outposts built on private Palestinian land” (Al Jazeera, October 13). This means that every act of theft and colonial vigilante that took place since 1967 by individual or groups of Jewish settlers might soon be recognized as legal ownership.

It is the height of injustice, not only from a Palestinian point of view, but also from standards set by international law. For example, UN Resolution 252 of May 21, 1968 considers “that all legislative and administrative measures and actions taken by Israel …which tend to change the legal status of Jerusalem are invalid and cannot change its status.” There are numerous laws and legal proclamations that render null and void all of Israel’s illegal action in the rest of the occupied territories.

The world’s only superpower, the veto-wielding US, has done much to ensure that Israel’s violations of international law go unpunished. Worse, it largely funded these violations, and shielded Israel from any accountability.

As for the real ‘theater of the absurd’, US lawmakers from both parties are launching a “new push to cut off American aid to the Palestinians as punishment for their efforts to become a separate state, with a House of Representatives committee pressing ahead with a bill withholding funding from any UN agency that recognizes Palestine,” according to the Financial Times (October 10).

Meanwhile, presidential candidates are once again groveling before the Israeli lobby. The latest is Republican presidential candidate Mitt Romney, who claims that President Barack Obama has not done enough by way of aiding and abetting the Israeli occupation. He promised to “bolster and repair alliance” with Israel, and escalate US action against Iran (Ynet News, October 9).

“Our friends should never fear that we will not stand by them in an hour of need,” he said.

“The Theater of the Absurd,” indeed.