Some Are More Equal at the U.N. 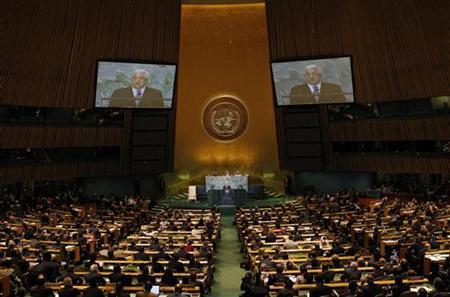 President Barack Obama’s shameful turnaround over Palestine has exposed the ‘audacity of hope’ for what it is—a sham. More important, it has turned the spotlight on the world body and the crass hypocrisy that goes on in there in the name of peace and international diplomacy. Let’s face it. The world body has ended up as a plaything in the hands of world powers.  And for all its lofty ideals and principles, it has repeatedly let down the Palestinians and the dispossessed everywhere.   Indeed, the Palestinians and UN share a long history of betrayals and perfidy that goes way back, right up to its inception in 1945.

No wonder words like UN resolutions, peace process and international community invariably evoke cynicism in the Middle East. The UN has been extraordinarily prompt and effective in dealing with the so-called rogue regimes across the Muslim world but has been totally helpless in the face of repeated aggressions by Israel and its powerful patrons.  Today, the world body appears poised to repeat its glorious history on the question of Palestinian state.

As though anticipating the inevitable, Saudi Foreign Minister Saud Al Faisal has called for restructuring of the United Nations.  While imploring the world body to accept the Palestinian demand for full membership, Saudi Arabia has turned the focus on the lopsided and undemocratic power structure of the institution that is supposed to be the world parliament and represent everyone.

The Saudi call comes at a time when the UN Security Council, the elite club of big powers that runs and controls the world body, is to take up the issue of Palestinian request for statehood which the US has pledged to veto. In a statement distributed at the UN, Prince Saud Al Faisal argues: “One of the important (UN) reforms should be restricting the use of the veto power through a commitment from permanent members not to use it toward actions that are intended for the implementation of already adopted resolutions of the Security Council.”

Spot on there. However, this isn’t merely about the use of veto by five permanent members to push their agenda and protect their interests and those of their allies.  The issue at the heart of a weak and ineffective UN is its inherently undemocratic nature and structure. “Real reform requires giving the General Assembly a key role in maintaining international peace and security,” points out Saud Al Faisal, the world’s longest serving top diplomat. “The ultimate goal for any restructuring of the Security Council should be the strengthening of its capabilities in order to effectively play its role in accordance with the UN Charter.”

Perhaps no other issue illustrates the abject helplessness of the UN and other international institutions as the Middle East conflict does. No issue has consumed the world body’s time, resources and energy as the Palestine question has. Hundreds of resolutions have been passed by the UN expressing ‘grave concern’ over the Palestine-Israel conflict and plight of Palestinians without making any difference whatsoever.

Whenever the world body did seek to check or even ‘condemn’ the Israeli crimes against humanity, the US and its allies stepped in to bail out the aggressor. Using its veto power, the US has blocked at least 40 UN Security Council resolutions censuring Israeli actions.  From 1947 to the end of the Cold war in 1990, more than half of the 690 resolutions passed by the General Assembly dealt with the Middle East conflict and all of them were like water off a duck’s back for Israel and its mentor.  No one else has defied, mocked and trampled on UN ideals and principles as Israel has with the blessings of the country that hosts the world body.

Addressing the UN last week, a day before Mahmoud Abbas presented his case for a Palestinian state, Obama lustily welcomed an independent South Sudan while slamming the door in the face of Palestinians.  Peace cannot come through statements and resolutions at the UN, thundered Obama, ignoring the fact that it was the UN that gave Israel the fig leaf of recognition immediately after a unilateral declaration of statehood by the Zionists on May 14, 1948.

Israel held no “negotiations” with Arabs before it formed its borders at gunpoint. But then Israel and its friends have always had a selective memory. So Washington is set to use its veto power all over again for Israel, defying all reason, common sense and its own ideals to block a token recognition of a Palestinian state.

Can there be a worse example of US double standards? Is there no limit to Western hypocrisy and duplicity?  The institution that was ostensibly created to build peace and resolve conflicts has become a big stick in the hands of big powers.  Using it, they run the world as they please. As a result, the UN has become a toothless tiger while real power rests with the Big Five.

Of course, many UN agencies have been doing an exemplary job of providing aid and fighting poverty, disease and other demons. However, the world body has spectacularly failed in its chief objective, its raison d’ etre, of protecting peace and preventing conflicts.  The UN has repeatedly failed to deliver because some at the table are more equal than others.  The institution formed to promote peace is dictated by the old jungle rule of ‘might is right.’

If this has to change, the UN must change reflecting the changed geopolitical realities of the 21st century.  Isn’t it strange that the largest democratic body on the planet offers no real say to more than half of the world’s population? The Security Council that runs the show is restricted to the US, Russia, Britain, France and China–four of them victors of World War II.  The Middle East, the cradle of civilizations, home to three great faiths and most of the world’s known energy resources, has no say in the UN’s decision making process. A country like India with a billion plus population is kept out.  Ditto Africa where human life is said to have begun.

There’s no representation for the world’s 1.7 billion Muslims.  Indeed, the entire southern hemisphere doesn’t find a seat at the table.  Why should the UN be the preserve of a select, elite club? India has been knocking on the door for some time demanding a permanent UNSC membership.  But it’s about time everyone else joined the fight for a complete restructuring of the world body.  It’s time for a new world order and for a fair and just UN.  A just and democratic world is not possible without justice and equality at the UN.