Ahmadinejad and Obama at the UN: Of Statesmanship and Political Pandering 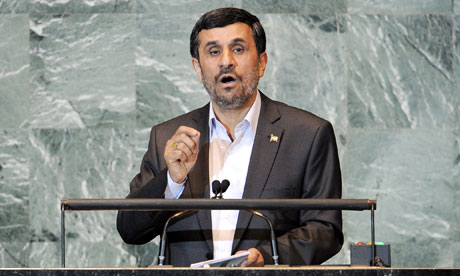 BEIRUT — For westerners, and particularly Americans, who have watched Iran’s President Mahmoud Ahmadinejad up fairly close as he delivers speeches in the US and elsewhere, including during last year’s visit to Lebanon, his charisma and populist connection with the public are evident and often powerful.

And President Barack Obama is normally no slough, either, on the stump, when he woos voters and inspires them to support his point of view. But last week’s UN appearance by the two leaders left a Matthew 13:24-30 type image of the wheat being separated from the chaff.  Both countries are juxtaposed menacingly in the Middle East, one pressuring the region in an all-out sustained NATO utilized effort to maintain its hegemony, and the other actively trying to lead the region in a very different direction. Consequently, the public was presented with an interesting contrast in styles and substance.

The two appearances could be handicapped along the lines that Obama’s tough job was to try to shore up Israel, whose days as a dominate force in the Levant rapidly grow fewer as history corrects the nearly incalculable injustice that resulted from the West’s implantation of the racist state and as history inexorably deconstructs the world’s last 19th Century colonial enterprise.

From the UN podium, Ahmadinejad knew in advance that approximately 15 minutes into his speech, AIPAC would signal the launch of its churlish and infantile 30 country walk-out, and most of the delegations in the audience knew that the White House had given its okay. The Iranian President also knew that there would be the pro-Zionist tabloid media blitz against him complete with the now expected degrading and offensive cartoons and the Persian visitor being labeled in the US media what else but an “anti-Semite”, “a clown”, “weirdo”, “crackpot”, “the new Hitler” and the usual moronic libels.  It is hard to imagine that the New York Times editors actually read his speech, since they not only failed it analyze it but simply dismissed it as a “tirade” the same description they applied last year.

But this year, the AIPAC/White House walk-out backfired and it was roundly condemned not only among the American public, but among the publics of each of the countries that agreed to rudely interrupt the proceedings. The Zionist controlled US government failed to realize that the international public, like most Americans, by and large retain respect for the values of open dialogue, common hospitality and respect for leaders from other countries.  Moreover, they understand that the raison d’etre of the United Nations is to provide its members with an open forum.  This includes Iran and each of the 192 other UN Member States. When Obama spoke, the Iranian delegation listened respectfully.

President Obama, embarrassingly for the American public, proved once more his habit of assuming the role of the groveling US politician for the pariah Israeli UN Member. This latest speech was no exception, and once more Obama made plain that he will support Israel’s continuing occupation of Palestine as a quid pro quo for the Israeli lobby funding and supporting his 2012 Presidential re-election bid.

Birzeit University Professor Hanan Ashrawi spoke for many in the audience and across America after Obama finished:  “I did not believe what I heard.  It sounded as if the Palestinians were occupying Israel.  There was no empathy for the Palestinians; he only spoke of the Israeli problems. He told us that it isn’t easy to achieve peace, thanks, we know this.  He spoke about universal rights, Good; those same rights apply to Palestinians. The White House is applying enormous pressure on everybody at the UN and they are using threats and coercion.  I wish they would invest the same energy in an attempt to promote peace, not threats.”

Has Iran produced a Statesman or a sycophant?

Mahmoud Ahmadinejad is at his best when he is engaged in dialogue and debate, according to people in Lebanon and Iran who know him well.  But he gets to the point quickly and it sometimes catches his interlocutors off-guard if they aren’t prepared.

Devoutly religious, Iran’s President is unerringly polite and respectful, and never fails to mention the positive and the necessity of dialogue and seeking common ground.

But he speaks frankly, and noted that President Obama never made good on a pledge to try to improve US-Iranian relations and to open a dialogue with Iran, and he also said he still hopes for a face-to-face meeting. “I don’t believe that this is a chance that has been completely lost,” Ahmadinejad said.

He told Iran’s fellow UN Members “You all know that the nuclear issue has been turned and manipulated into a political issue,” and he added that Iran remains ready to negotiate over its disputed nuclear program, and repeated the country’s position that the program is for the peaceful production of energy

Following the 2009 disputed Iranian elections, he stated “We were very much in support of change. I sent a personal message to President Obama, but we never received a response.

His UN speech theme was that most nations of the world are unhappy with the current international circumstances. “And despite the general longing and aspiration to promote peace, progress, and fraternity, wars, mass-murder, widespread poverty, and socioeconomic and political crises continue to infringe upon the rights and sovereignty of nations, leaving behind irreparable damage worldwide.” He continued, “Approximately, three billion people of the world live on less than 2.5 dollars a day, and over a billion people live without having even one sufficient meal on a daily basis. Forty-percent of the poorest world populations only share five percent of the global income, while twenty percent of the richest people share seventy-five percent of the total global income. More than twenty thousand innocent and destitute children die every day in the world because of poverty.”

He challenged the United Nations to reform itself and he urged honest debate on the vital issues confronting the world community. He asked the UN to bear in mind who imposed colonialism for over four centuries, who  occupied lands and massively plundered resources of other nations, destroyed talents, and alienated languages, cultures and identities of nations?

He asked the UN members to join in solutions to the World’s problems but asked that we not hide the facts of:

• Who triggered the first and second world wars that left seventy million killed and hundreds of millions injured or homeless? Who created the wars in Korean peninsula and in Vietnam?

• Who imposed through Zionism and over sixty years of war, homelessness, terror, and mass murder on the Palestinian people and on countries of the region?

• Who imposed and supported for decades military dictatorship and totalitarian regimes on Asian, African, and Latin American nations?

• Who used nuclear bomb against defenseless people, and stockpiled thousands of warheads in their arsenals?

• Whose economies rely on waging wars and selling arms?

• Who provoked and encouraged Saddam Hussein to invade and impose an eight-year war on Iran, and who assisted and equipped him to deploy chemical weapons against our cities and our people?

• Who used the mysterious September 11 incident as a pretext to attack Afghanistan and Iraq, killing, injuring, and displacing millions in two countries with the ultimate goal of bringing into its domination the Middle East and its oil resources?

• Who nullified the Bretton Woods system by printing trillions of dollars without the backing of gold reserves or equivalent currency, a move that triggered inflation worldwide and was intended to prey on the economic gains of other nations?

• Which country’s military spending exceeds annually a thousand billion dollars, more than the military budgets of all countries of the world combined?

• Who dominates the policy-making establishments of the world economy?

• Who are responsible for the world economic recession, and are imposing the consequences on America, Europe and the world in general?

• Who are the ones dominating the Security Council which is ostensibly responsible for safeguarding the international security?

This month’s Iran-U.S Presidential addresses at the United Nations have given its members a clear choice for the challenges quickly engulfing the Middle East. Ultimately, as the popular awakenings in this region teach us, it is the citizens of each country who have the power to decide how to deal with these crises.

Iran’s President demonstrated at Turtle Bay this month that he understands the problems, offers rational solutions and is ready for constructive dialogue.  The next move is up to President Obama to extricate him and his country from the jaws of Zionism and to join with Iran and the community of nations with constructive proposals to help alleviate the challenges Iran’s President enumerated.