History and its Victims: The Fate of Palestinians 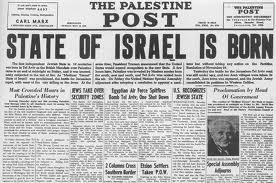 In fairness, we should examine the arguments against granting statehood to the Palestinians.  So let me review all of the arguments from the silly to the more serious.

• The First claim is that Israel is the historical land of the Jewish people and that the land was given to them by God.  This argument retains currency in religious circles and was even raised by Israel’s former Prime Minister, Ariel Sharon.  Of course, Palestinians claim their own historical and religious roots in the Territory.  I could facetiously say, “There is no God and his name is neither Yahweh nor Allah.”  But let’s simply consider the issue of claims within a legal framework free of conflicting myths.  What is the legal basis for Israel’s claim to the territory?  As the facts show the Jewish population in Palestine was a small minority for approximately 1,700 years.  After the Diaspora, the territory was ruled successively by the Byzantine, the Arabian, and Turkish empires, with a brief interlude during which Palestine was ruled by Crusaders.  (During the period of Turkish rule, Sephardic Jews fleeing Spain were given refuge both in the Middle East and in Eastern Europe.)  So the Jewish claim to the land is based essentially upon the influx of Jewish immigrants from Eastern Europe, especially during and after WWII,  on the ‘ reputed approval’ of the General Assembly of some patches of land inhabited largely by these immigrants, and subsequently upon military victories which expanded these areas, thus establishing a reality on the ground.  The Israeli claim therefore is tenuous at best in strict legal terms and in any case does not apply in any manner to the West Bank or Gaza.  Anyone who doubts this analysis should do some simple research.  As an example note that the first leaders of the state of Israel were all born in the Russian Empire.  More recent Israeli leaders were born in Israel to first generation immigrants to Palestine. (Imagine what the birther movement would think of all this assuming its ranks were capable of logically consistent thought.)

• At the inception of the State of Israel, no statehood was granted to the Palestinians.  The Palestinians then by default became subjects of Jordan, Egypt, and, of course, refugees as previously explained.  The second objection to Palestinian statehood rests upon this brief reality from 1948-67.  The argument, though, that the Palestinian population should be absorbed by Arab States and given citizenship in these respective states became a moot point following the ’67 war.  Since then, the Palestinians have been a people occupied by Israel.  Furthermore, the Oslo Accords between the PLO and Israel recognized a process toward Palestinian statehood.  Although the Oslo path to statehood has been obstructed, a legal precedent is already in place to permit the establishment of a Palestinian State.  And both Jordan and Egypt have forsworn territorial interests in the West Bank and Gaza.

• Israel today claims that the Palestinian authority should not be granted statehood before it fully recognizes and acknowledges Israel as a Jewish State.  Of course, the flip side of the coin begs the question as to why Israel refuses to recognize the Palestinian’s right to self-determination.  In fact, this argument cloaks a thorny precedent.  By acknowledging Israel as a Jewish State, the Palestinian authority would undermine the claims of Palestinian refugees to any ‘right of return’ or alternative compensation.  Such acknowledgement would also undercut the future rights of Palestinians who live within Israel’s pre-’67 borders.  In fact, one should ask whatever happened to the principle of separation of church and state.  Is it appropriate that the community of nations recognize such an exception in the case of Israel and effectively condemn current and future minorities within Israel to second class citizenship?  History undoubtedly began with the emergence of civilizations whose power structure was a partnership between kings and religious hierarchies.  But history has lumbered forward at no little human cost and such structures belong in the past.

• The final argument is that the Palestinian Authority has been unable to prevent attacks against Israel and has entirely lost control over Gaza.  Every time a rocket is fired from Gaza into Israel this argument reverberates in Washington and London.  Setting aside the obvious fact that the people of Gaza are under an inhumane occupation and blockade (hence, ‘one man’s terrorist is another’s freedom fighter’), it should be clear that dealing with such problems would be facilitated by the end of Israeli occupation and settlements and the onset of a full scale project of state building to be undertaken by the UN following the recognition of Palestine.

In my humble estimation, the analysis above effectively refutes the best of the arguments against Palestinian statehood.  I would in fact go further to say that the arguments are essentially bogus and are meant to allow Israel to continue the occupation and continue settlement activity, perhaps waiting for a new historical opportunity to scatter the Palestinian inhabitants of Jerusalem and the West Bank and to annex the entire land.  When the Prime Minister of Israel says that he cannot accept the ’67 borders because they are not defensible, he is indirectly confirming such suspicions.  What gives any state the right to determine whether its borders are defensible and to pre-emptively occupy neighboring territory as a defensive measure?

Several questions remain open however.  If a Palestinian State were approved, what would be the next steps?  How can such an intransigent conflict be successfully resolved?  It is at this point a foregone conclusion that the US will veto Palestine’s bid soon to be tabled by President Abbas.  This is an unfortunate and morally indefensible use of the USA’s veto power, but it is of course not without precedent; the US has made a habit of exercising vetoes in the Security Council to protect its client state Israel.  By far the best course of action would be for the Security Council to approve the measure and ask the two states to negotiate for a limited period of time on an equal footing.  But in all likelihood, this will not happen.  And even if it did, I would guess that subsequent bilateral negotiations between the states would still fail.  Eventually, a just settlement will need to be imposed.  Failing that, the victims in this conflict will be denied justice until Israel is recognized as an apartheid state.[4]

But what might be the shape of a just settlement?  This is the last issue that I will briefly address here.  There are effectively only two possible solutions.  The solution usually put forward by that proverbial international community is the so-called two-state solution.  Most agree, including the US, that the two states should be established along the ’67 borders.  However, they further allow that final borders be subject to negotiated land swaps and agreements over the fate of Jerusalem and the question of Palestinian refugees.  The logic behind this current consensusl is that it recognizes the ’67 borders as a fait accompli and leaves the remaining issues to direct negotiations between Israel and the Palestinian Authority.  In fact, this is far from an equitable settlement, since it grants Israel negotiating rights over the West Bank settlements and places the Palestinians in an inferior negotiating position on the question of refugees by accepting the ’67 borders.  And the status of Jerusalem is as well slanted in Israel’s favor by virtue of its being under Israeli occupation.  Essentially this consensus has allowed Israel to stall without end

This then is why I personally feel that any two-state solution will ultimately need to be imposed.  So, what might an imposed settlement look like?  Obviously, such a decision ought to be a judicial one by an impartial international court or by impartial diplomatic consensus.  But my own position would be that the two states should be established precisely along the ’67 borders.  All Jewish settlements in the West Bank should be dismantled as illegal, with no right to negotiation, and Palestinian refugees from Israel should be granted full and fair compensation for their loss of property and the injustice they have endured.  Finally, Jerusalem should be declared an International City governed by the UN, with free rights of travel but significantly limited right of further, permanent settlement.  Many may disagree with this position, but I will be happy to defend or debate it.  I would further say that it represents a favorable decision for Israel given the historical facts.  Having said that, let me again say that such a decision should ideally come from an impartial judicial proceeding.

In the previous paragraph I made mention of two possible solutions.  What then is the second one?  The second solution would be modeled on South Africa.  Effectively, this means recognizing that the State of Israel has been in place since 1948 and has governed an expanded territory since 1967.  So simply recognize that the Palestinian populations should be granted citizenship and voting rights immediately, and, of course, recognize the right of refugees to return and enjoy the same rights and access to courts to reclaim their lost property.  This new state would be overwhelmingly Palestinian, of course, and so the Zionist dream of a Jewish homeland would be lost.  But this solution was found appropriate in South Africa, so why not in Israel/Palestine?  I suspect that Israel is not ready for this solution.  But if they continue to resist any discussion along the lines of the first solution, history will eventually overtake their state.  The status quo is not sustainable!

[2] I have put the word approval in brackets because the vote was taken in the General Assembly and not the Security Council.  See https://www.foreignpolicyjournal.com/2010/10/26/the-myth-of-the-u-n-creation-of-israel/, a relevant article by Jeremy R. Hammond.

[3] The questions in parenthesis are of course rhetorical.

[4] Former President Carter, for the moment a lone voice, has foreseen such a development in his 2007 book, Palestine, Peace not Apartheid.