Labor’s Demise as a Countervailing Power 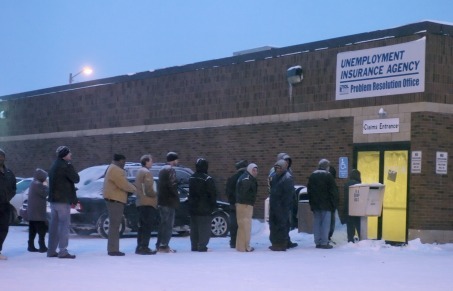 It is Labor Day weekend, 2011, but labor has nothing to celebrate.  The jobs that once gave American workers a stake in capitalism have left and gone away.  Corporations in pursuit of near-term profits have moved labor’s jobs to China, India, Indonesia, Taiwan, South Korea and Eastern Europe.

Labor arbitrage, that is, the substitution of foreign labor that is paid less than its productivity for American labor, has enriched Wall Street, shareholders, and corporate CEOs, but it has devastated American employment, household incomes, tax base, and the outlook for the US economy.

The zero figure is actually an optimistic number. As John Williams (shadowstats.com) has made clear, problems with the BLS’s seasonal adjustments and “birth-death” model during the prolonged downturn that began in December 2007 result in the BLS over-estimating new jobs and underestimating lost jobs.

Seasonal adjustments and the “birth-death” model were designed with a growing economy in mind and result in miscounts during downturns. For example, the “birth-death” model estimates new jobs that are created from new start-up companies that are not yet reporting, and it estimates the job losses from companies that have gone out of business. In a growing economy, start-ups exceed jobs losses, but the situation reverses during downturns or during periods of sub-normal job growth. For the past forty-four months, the “birth-death” model has overestimated the number of new jobs created. When the annual revisions are made to the job reports, the excess jobs are taken out, but it is seldom headline news.

The reason that nearly four years of economic stimulus, consisting of large federal budget deficits and near zero interest rates, hasn’t revived the economy is that the jobs that Americans once had have been moved offshore. Stimulus cannot put Americans back to work in jobs that have been given to foreign countries.

Post-World War II Keynesian economists, such as Paul Krugman and Robert Reich, think that if the federal government would add more stimulus by enlarging the already massive federal deficit, new jobs would somehow be created to take the place of those that have left.  This is a delusion. Not only have the supply chains necessary to support US economic activity been disrupted and broken by offshoring, but also the same incentive—excess supplies of foreign labor that produces more value than it is paid—that sent jobs abroad is still operative.

In a word, the US economy has been de-industrializing, moving from a developed to an underdeveloped economy, for the past two decades.  It has been the case for many years that when the US economy manages to eke out new jobs, they are in non-tradable domestic services, such as health care and social assistance, waitresses and bar tenders, retail clerks. Non-tradable employment consists of jobs that do not produce goods and services that could be exported to reduce the large US trade deficit.

The long-term deterioration in the US economy has been covered up by “reforming” the official measures of unemployment and inflation.  The U3 measure of unemployment, the current 9.1% unemployment rate, only measures unemployment among those who are actively seeking a job. Those who have become discouraged by the inability to find a job and have ceased looking are not counted as being among the unemployed, and the U3 measure makes no adjustment for those who are forced into part-time jobs because there is no full-time employment.

The government knows that the U3 “headline” unemployment rate is seriously understated and provides a broader measure known as U6. This measure, which is seldom reported by the financial media, includes short-term discouraged workers (those who have not looked for jobs for six months or less) and an adjustment for those who wish full time employment but can only find part time work.  Currently, this measure of unemployment stands at 16.2%.

Similar understatement exists in the measure of inflation known as the Consumer Price Index. In order to reduce cost-of-living adjustments to Social Security checks and to hold down other inflation adjustments, the “progressive” Clinton administration accepted the Boskin Commission’s recommendation to introduce substitution into what had been a fixed, weighted, basket of goods used to measure the cost of a constant standard of living. In the new “reformed” measure, if the price of an item increases, say New York strip steak, the index assumes that consumers switch to a less expensive cut, such as round steak. Thus, the price increase doesn’t show up in the CPI.

Consumers, or a number of them, do tend to behave in this way. However, since the basket of goods comprising the CPI is no longer constant, but changes with price changes, the CPI has become a variable measure of the cost of living that reduces the inflation rate by measuring a lower standard of living.

John Williams estimates the CPI according to the previous official methodology that used a fixed basket of goods. He finds the rate of inflation to be much higher than is reported by the substitution-based methodology.

The understatement of inflation serves to boost real Gross Domestic Product growth. In order to compare how much larger (or smaller) the economy is this year compared to last year, the GDP figure has to be adjusted for inflation.  If the economy grew 5% in nominal terms and inflation was 3%, then GDP grew 2% in real terms, that is, real goods and services, as opposed to mere price rises, increased 2% over the year.

When John Williams adjusts US GDP with the former or traditional measure of inflation, he finds that there has been no growth in real GDP for several years. In other words, during the period of “economic recovery” the economy has actually been declining.

The Bush/Cheney regime elevated the pursuit of American Empire under cover of “the war on terror.” Based entirely on lies and falsified intelligence, Bush/Cheney launched wars against the Taliban, who were unifying Afghanistan, and against Saddam Hussein in Iraq.

In the 1980s, Hussein was used by Washington to launch a war against the revolutionary government in Iran that had overthrown the American puppet government headed by the Shah of Iran.  Ever since Washington lost its puppet rule over the Iranians, Washington has refused diplomatic relations with Iran. In the place of diplomatic relations, Washington demonizes Iran in order to set the country up for another attack a la Serbia, Afghanistan, Iraq, Libya, Somalia, Pakistan, and Yemen.  Syria is next.

Saddam Hussein’s service to Washington was overlooked when it became more important to eliminate support for Hamas and Hezbollah, two barriers to Israel’s expansion in the Middle East, than to maintain Washington’s gratitude to an Iraqi pawn.

Despite unequivocal reports from arms inspectors that Iraq had no weapons of mass destruction and most certainly had nothing whatsoever to do with 9/11, top Bush/Cheney regime officials demonized Iraq as the greatest threat to America. The imagery of mushroom clouds from nuclear weapons was evoked, and a war was launched entirely on false pretexts that destroyed a country and left over one million Iraqis dead and four million displaced. What Washington did to Iraq is what the Nazis were tried and executed for at the Nuremberg Trials.

Obama was elected in order to stop the illegal and senseless wars.  Instead, Obama both continued the wars in Iraq and Afghanistan and expanded the wars into Libya, Pakistan, and Yemen. Since the deregulation of the financial system under the Bush/Cheney regime and the “war on terror,” the entire economy of the US has been sacrificed for the benefit of the financial sector and the military/security complex.

Labor Day is an anachronism. It should be renamed Corporation Day or War Day to celebrate the success of Bush/Obama in eliminating labor unions as a countervailing power to corporate power and the elevation of War as the highest goal of the American state.