Libya and the World We Live In 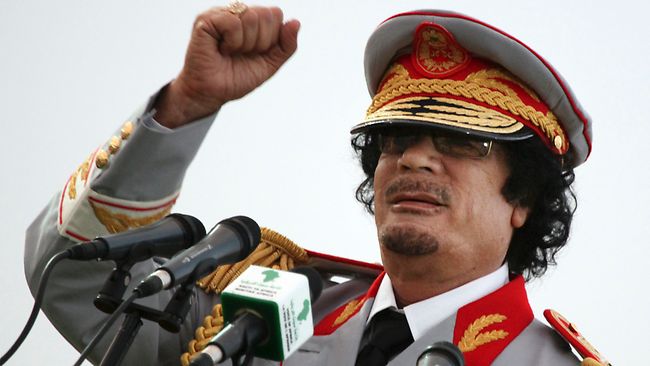 “Why are you attacking us? Why are you killing our children? Why are you destroying our infrastructure?” – Television address by Libyan Leader Muammar Gaddafi, April 30, 2011

In his TV address, Gaddafi had appealed to the NATO nations for a cease-fire and negotiations after six weeks of bombings and cruise missile attacks against his country.

Well, let’s see if we can derive some understanding of the complex Libyan turmoil.

If the Triumvirate wants to punish Gaddafi and his sons it will arrange with the Triumvirate’s friends at the International Criminal Court to issue arrest warrants for them.

If the Triumvirate doesn’t want to punish the leaders of Syria, Egypt, Tunisia, Bahrain, Saudi Arabia, Yemen, and Jordan it will simply not ask the ICC to issue arrest warrants for them. Ever since the Court first formed in 1998, the United States has refused to ratify it and has done its best to denigrate it and throw barriers in its way because Washington is concerned that American officials might one day be indicted for their many war crimes and crimes against humanity. Bill Richardson, as US ambassador to the UN, said to the world in 1998 that the United States should be exempt from the court’s prosecution because it has “special global responsibilities”. But this doesn’t stop the United States from using the Court when it suits the purposes of American foreign policy.

If the Triumvirate wants to support a rebel military force to overthrow the government of Libya then it does not matter how fanatically religious, al-Qaeda-related,1 executing-beheading-torturing, monarchist, or factionally split various groups of that rebel force are at times; the Triumvirate will support it, as it did certain forces in Afghanistan and Iraq, and hope that after victory the Libyan force will not turn out as jihadist as it did in Afghanistan, or as fratricidal as in Iraq. One potential source of conflict within the rebels, and within the country if ruled by them, is that a constitutional declaration made by the rebel council states that, while guaranteeing democracy and the rights of non-Muslims, “Islam is the religion of the state and the principle source of legislation in Islamic Jurisprudence.”2

Adding to the list of the rebels’ charming qualities we have the Amnesty International report that the rebels have been conducting mass arrests of black people across the nation, terming all of them “foreign mercenaries” but with growing evidence that a large number were simply migrant workers. Reported Reuters (August 29): “On Saturday, reporters saw the putrefying bodies of 22 men of African origin on a Tripoli beach. Volunteers who had come to bury them said they were mercenaries whom rebels had shot dead.” To complete this portrait of the West’s newest darlings we have this report from The Independent of London (August 27): “The killings were pitiless. They had taken place at a makeshift hospital, in a tent marked clearly with the symbols of the Islamic crescent. Some of the dead were on stretchers, attached to intravenous drips. Some were on the back of an ambulance that had been shot at. A few were on the ground, seemingly attempting to crawl to safety when the bullets came.”

If the Triumvirate’s propaganda is clever enough and deceptive enough and paints a graphic picture of Gaddafi-initiated high tragedy in Libya, many American and European progressives will insist that though they never, ever support imperialism, they’re making an exception this time because …

• The Libyan people are being saved from a “massacre”, both actual and potential. This massacre, however, seems to have been grossly exaggerated by the Triumvirate, al Jazeera TV, and that station’s owner, the government of Qatar; and nothing approaching reputable evidence of a massacre has been offered, neither a mass grave or anything else; the massacre stories appear to be on a par with the Viagra-rape stories spread by al Jazeera (the Fox News of the Libyan uprising). Qatar, it should be noted, has played an active military role in the civil war on the side of NATO. It should be further noted that the main massacre in Libya has been six months of daily Triumvirate bombing, killing an unknown number of people and ruining much of the infrastructure. Michigan U. Prof. Juan Cole, the quintessential true-believer in the good intentions of American foreign policy who nevertheless manages to have a regular voice in progressive media, recently wrote that “Qaddafi was not a man to compromise … his military machine would mow down the revolutionaries if it were allowed to.” Is that clear, class? We all know of course that Sarkozy, Obama, and Cameron made compromises without end in their devastation of Libya; they didn’t, for example, use any nuclear weapons.

• The United Nations gave its approval for military intervention; i.e., the leading members of the Triumvirate gave their approval, after Russia and China cowardly abstained instead of exercising their veto power; (perhaps hoping to receive the same courtesy from the US, UK and France when Russia or China is the aggressor nation).

• The people of Libya are being “liberated”, whatever in the world that means, now or in the future. Gaddafi is a “dictator” they insist. That may indeed be the proper term to use for the man, but it must still be asked: Is he a relatively benevolent dictator or is he the other kind so favored by Washington? It must also be asked: Since the United States has habitually supported dictators for the entire past century, why not this one?

The Triumvirate, and its fawning media, would have the world believe that what’s happened in Libya is just another example of the Arab Spring, a popular uprising by non-violent protestors against a dictator for the proverbial freedom and democracy, spreading spontaneously from Tunisia and Egypt, which sandwich Libya. But there are several reasons to question this analysis in favor of seeing the Libyan rebels’ uprising as a planned and violent attempt to take power in behalf of their own political movement, however heterogeneous that movement might appear to be in its early stage. For example:

• They were an armed and violent rebellion almost from the beginning; within a few days, we could read of “citizens armed with weapons seized from army bases”3 and of “the policemen who had participated in the clash were caught and hanged by protesters”4

• Their revolt took place not in the capital but in the heart of the country’s oil region; they then began oil production and declared that foreign countries would be rewarded oil-wise in relation to how much each country aided their cause

• They soon set up a Central Bank, a rather bizarre thing for a protest movement

• International support came quickly, even beforehand, from Qatar and al Jazeera to the CIA and French intelligence

The notion that a leader does not have the right to put down an armed rebellion against the state is too absurd to discuss.