Understanding Clinton’s Statement on Libya: ‘We own you’ 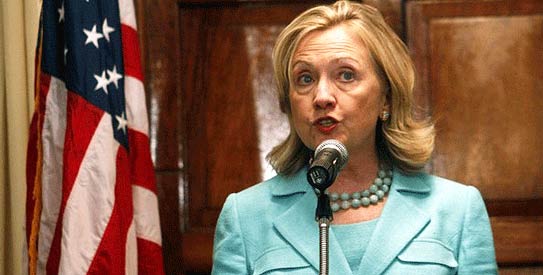 As the battle for parts of Tripoli and swathes of Libya continues, the “international community” has released $1.5 billion of Libyan assets, much of which will basically be used by the National Transitional Council (NTC). It is already well known that NATO’s involvement in the Libyan conflict means that they are effectively dictating the terms of Libya’s future, and the release of these funds is a part of the same process whereby the United States Secretary of State Hillary Clinton set out in a written statement Friday 26th August what is expected from the NTC:

As funds are released, we look to the Transitional National Council to fulfill its international responsibilities and the commitments it has made to build a tolerant, unified democratic state—one that protects the universal human rights of all its citizens.

Of course, these words are simply empty slogans, since the United States has never even tied the supply of extensive aid (such as their billions in military aid to Egypt) to any meaningful program of encouraging tolerance or what they term “universal human rights”, and their financial and political support of oppressive dictatorships whose torture chambers would be outsourced by the CIA for the interrogation of “terrorist” suspects undermines any such rhetoric that the World has heard many times from the State department previously. The fact that these assets are in effect actually owned by the Libyan people, and not aid of any form, makes it even more astonishing that the “international community” and the United States feel entitled to dictate their use.

Cutting through the empty language which is common fare to be used in such circumstances by the US, a later section outlines some of the conditions expected:

The TNC also has obligations to the international community. We will look to them to ensure that Libya fulfills its treaty responsibilities, that it ensures that its weapons stockpiles do not threaten its neighbors or fall into the wrong hands, and that it takes a firm stand against violent extremism.

Given the extent of the American war machine to the point they are killing civilians by remote control, and the proliferation of Western arm deals with all manner of despots from Saudi to Israel, “violent extremism” is something that the US and its allies engenders rather than acts against. What is meant in this context, and within the framework of establishing a “tolerant, unified democratic state”, is one that will submit itself to Western financial and political interests, which today also entails ensuring that Israel remains safe, and any Islamic based polity is off the table.

As for the will of the Libyan people, this will be expressed through the NTC, who appear to be poised to serve as representing the will of the “international community” rather than that of the people of the region, and given that the NTC will be relying upon the goodwill of NATO and others to put bread on its table, it is unlikely to act as an independent force truly representing the people. As has already been explained NATO involvement in the conflict and the next phase of rebuilding the country has put them in the position to effectively dictate the future.

The far-fetched thought that NATO would leave the people to resolve their own path forward once the obstacle of Gaddafi was removed is now completely disproven. For all talk about “partnership” and “working together” in the words coming out of the State Department, Clinton is effectively explaining to the NTC and Libya – you need access to your own money, and we are the doorkeepers. In effect, we own you.

This article was originally published by New Civilization. It has been republished here with permission from the author.