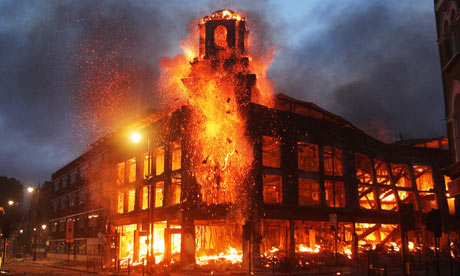 War came to Britain’s streets this past week in London, Liverpool, Birmingham, Bristol and other urban centers. The country had seen protests against the Iraq war, cuts in pensions for local government employees and teachers, and against dramatic increases in student tuition fees. The events of recent days, however, signify the worst social unrest in a generation. It is a reminder of the 1980s, when urban riots shook British society to its core.

Thirty years ago, racism in the inner cities was rampant. Then Labour government had fallen and the political left was utterly demoralized. Conservative prime minister Margaret Thatcher, champion of ultra-rightwing economic theories and political soulmate of Ronald Reagan, had assumed office, determined to confront the unions she saw as the main cause of social evils. Thatcher, with her Chancellor of the Exchequer Geoffrey Howe and Industry Secretary Keith Joseph, was administering shock therapy to the country.

Thatcher’s shock doctrine was applied in the form of drastic cuts in benefits for the unemployed, the sick, the elderly. Public services were slashed, privatization of many services followed, as did high interest rates in the fight against inflation. Many in the workforce were losing hope. Economic and social turmoil ensued. There were street riots in deprived inner-city areas suffering the brunt of Thatcherite policies.

Three decades hence, there are those who say that Prime Minister James Cameron and his Chancellor George Osborne have stolen Margaret Thatcher’s manual. That manual exaggerates problems even more than their severity. It asserts that there is no solution other than cutting workers’ pay, privatization and outsourcing, slashing benefits and raising taxes for ordinary people. But higher taxes for rich are a bad thing. It uses these measures to reconstruct society.

The experiment has failed repeatedly. It has generated deeper poverty and inequalities. It has led to high unemployment, low wages, even lower benefits to force citizens to work. It is called competition and it is trumpeted because, in truth, it is good for company profits. The old mantra that corporate profits filter down to the lower rungs of society and benefit poor remains as dubious as it was thirty years ago.

There is a chorus of condemnation of perpetrators of this violence. We are offered a simple choice between good and evil, and told that this evil must be defeated. Any effort to look at these events in context is anathema, particularly in the eyes of government ministers. Before he became prime minister, David Cameron used to describe Britain as a “broken society.” Today, he prefers to call parts of that society “sick.”

Of course, rioting and looting involve criminality and must be condemned. But that is not the whole story. While straightforward acts of arson and looting were taking place in Tottenham and neighboring areas of London, the violence in Birmingham had taken on racial overtones. Text messages that gangs of one ethnic origin or other were coming “to get you” were circulating. Worse, in an act of deliberate killing, a car hit and killed three British Muslims guarding their properties.

A headline in the Independent newspaper spoke of race relations being on the knife edge. Social disturbances always have deeper roots. Their context is as important as the event that triggers them. It is convenient for politicians, habitual these days of using the language of violence themselves, to blame “criminals.” It releases them from the responsibility of actions that have created the current distressing context.

The London riots broke out on the night of August 6. Two days before, police had shot and killed a black man, Mark Duggan, a local resident who was going in a taxi. For several days, the officially-inspired version in the press depicted Duggan as a “gangster.” It implied that a shot was fired from the taxi at a policeman, and that the bullet was lodged in the officer’s radio. Police fired back and Duggan died. However, it later transpired that the bullet lodged in the officer’s radio might, in fact, have been fired by another police officer.

A crowd waited for several hours outside a police station for answers, but the mood turned furious when nobody came out to answer questions. A witness described a separate incident in which a 16-year-old girl was severely beaten when she approached policemen to remonstrate. Within hours, London was burning and the rioting was spreading to other cities in England, the mother country of the United Kingdom. Scotland and Wales, with their own elected regional governments, were thankfully peaceful. They were to send police reinforcements to the affected areas of England.

Western societies have suffered a major socio-economic and moral collapse. The recent street violence in England’s cities is the latest, most disturbing expression of the individual selfishness and anger causing the rot. For years, people have been taught the Thatcherite maxim that “there is no such thing as society, collective conscience or collective kindness.” That dictum tells that individuals live for themselves; morality is personal and so, too, is the individual’s freedom to amass wealth.

This way of life has created something akin to Hobbesian socio-economic conditions in Britain today. On one hand is the vast majority struggling to make ends meet. On the other, the scandal of members of parliament making fraudulent, or questionable, claims for expenses to supplement their incomes. And police are revealed as taking bribes from Rupert Murdoch’s media empire. For a long time, there appears to have been one law for rich and powerful, and a different law for the rest. The recent riots began in Tottenham, in the London Borough of Haringey, which has some of the most deprived inner-city areas. In the nearby Borough of Hackney, youth clubs are closing. Where will the youth go?

Still, government cuts continue to bite and seem relentless. Among the hundreds arrested in recent days and facing time in prison are people of all ages and backgrounds: minors and adults, men and women, university graduates, a ballerina, a charity worker, a schoolteacher, a law student, a mother with a six-month-old baby – and a millionaire’s daughter.

I know London well, having worked in the capital city for most of my life. To see adults breaking into large stores and walking away with expensive gadgets is shocking enough. Even more shocking is to see a ten-year-old boy, who has picked up just a few items of food, going home on his bike.

Simply thugs and criminals? Or does it require thinking on a higher level?