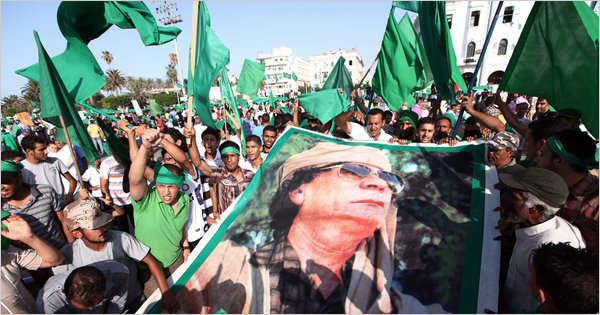 TRIPOLI — One of the jokes heard at this week’s massive pro-government Friday post-prayer rally at Green Square—in most of the other Arab countries Fridays are days of rage against the government du jour, but in Libya, Friday prayers are followed by massive pro-Qadaffi rallies, attended two weeks ago by close to 65% of Tripoli’s population—is about how each morning Libya’s leader, following early morning Fajr prayers, dons his formal uniform, complete with those huge epaulets, and salutes the small NATO flag he tapes to his bathroom mirror as he moves from place to place dodging NATO drones and assassins.

“Our leader does this”, one young lady informed me first with a wide smile and then growing serious, “because the NATO bombing of Libyan civilians, which the US/NATO axis claims Qaddafi is doing, has caused his popularity to skyrocket among our proud and nationalist tribal people. I am one example of this.  Yes, of course we can use some new blood and long overdue reform in our government.  Which country cannot?  But first we must defeat the NATO invaders and then we can sort out our problems among our tribes including the so-called ‘NATO Rebels.’”

Since the beginning of the NATO operation on March 31, the alliance has conducted nearly 15,000 sorties, including close to 6,000 bombing missions, according to NATO’s media office in Naples, Italy. The most recent attacks reported on July 9 included 112 sorties and 48 bomb/missile attacks, and that is about average.

The two most active embassies in Libya these days are the Russian and the Chinese.  On February 25, according to the Bulgarian Embassy staff, which was falsely rumored to be currently handling US consular services (whereas it appears no one is doing this here in Libya), the US Embassy essentially ordered all EU and NATO Embassies to pack up and join their chartered plane and boats. Libyan officials tell visitors that they were shocked by the fast exodus.  “They did not even say goodbye. Suddenly they were on their way to the airport,” one Foreign Ministry advised during a meeting last week.

The Russian and Chinese leadership has grown increasingly critical of NATO’s actions in Libya and are now firmly demanding an immediate and permanent ceasefire.  Some cynics here are pointing out that these countries, unlike NATO, know exactly what they are doing and it includes the realization that they have an excellent chance to obtain many billions of dollars in lucrative contracts, which every official interviewed here has sworn, not one Libyan Dinar of which will ever again go to any NATO country, when its aggression is finally repelled.

It is partly this realization that it’s “all or nothing” that keeps the US and its potent military asset, NATO, focused on assassinating Colonel Qaddafi and breaking his civilian support base.  If Qaddafi lives, NATO loses and so do the current major oil industry contractors who are reportedly becoming depressed from seeing reports of all the Russian and Chinese businessmen arriving in Libya.

NATO, Diplomatic, and Congressional sources confirm that the Obama Administration erred badly in thinking that Libya’s regime would collapse “in a few days, not  weeks” as Obama assured the American public who has to pony up the estimated $5 billion in costs through July 31, 2011. Obama’s egregious miscalculation may cost him his presidency if the economy does not.

As one student at Tripoli’s Al Fatah University commented, “What your American government has done in the region to destroy yourselves since 9/11 is amazing to Libyans. Now you are going to fight us?  Why?  You already had all our oil you wanted at a bargain prices, we stupidly put our sovereign funds in US banks and we did not even bother Israel much. Every day that NATO bombs, it kills more Libyan civilians. We sacrificed nearly one-third of our population or more than one million of our brothers and sisters expelling the Italians 70 years ago.  Doesn’t anyone in your government study history? We are not Bahrainis or Syrians.  We are armed and will use our weapons. Among the errors our leadership has made, one of the worst is that it believed the US agreements we made in 2004. The Iranians and North Koreans laugh at us for trusting you and giving up our nuclear and biological weapons programs. Believe me dear, if Qadaffi leaves power you will miss him because the Libyan people will be tougher against your projects than he has been.”

On Sunday, July 10, France seemingly allied itself with Russia and China in calling on NATO to immediately stop its counterproductive and counterintuitive bombing, as more countries witness public demonstrations against NATO’s actions in Libya.  French Defense Minister Gerard Longuet said in Paris that it was time for Qaddafi loyalists—which France acknowledges have been rapidly increasing in number—and Libyan rebels “to sit around a table to reach a political compromise” because, he said, “there was no solution with force.”

NATO and the Obama administration can have no part of a dialogue because they will be the major losers if peace comes to Libya without Qadaffi leaving power.

No sooner had the French Defense Minister spoken on July 12, reflecting also the views of the British and Italian military, than the US State Department issued a statement insisting that “the United States will continue efforts as part of a North Atlantic Treaty Organization (NATO) coalition to enforce a U.N. Security Council-authorized no-fly zone in Libya designed to protect civilians under threat of attack.” The spokesman did not mention that the no-fly zone was achieved back in March in 48 hours and that no Libyan aircraft have flown since. Mission accomplished 100 days ago.

Hillary Clinton repeated her earlier words, “Our efforts in Libya will take time, but let there be no mistake that the political, military, and economic pressure on Qaddafi continues to grow. The allies will continue to increase pressure until the Libyan people are safe, their humanitarian needs met, and a transition of power is fully under way.”

And so it goes. On July 9, NATO claimed its aircraft carried out another “precision strike on a pro-Qaddafi missile firing position near Tawurgha, south of Misrata.  According to its media office, “NATO intelligence, surveillance and reconnaissance were conducted over a period of time to ascertain the military use of the site. It was confirmed as being used to launch indiscriminate attacks on Libyan civilians in the area and a staging area by pro-Qaddafi villagers, including planning attacks on rebel forces near the port and city of Misrata.”  The next morning, local inhabitants denied that the farm had any military activity on the property and an examination of the farm buildings failed to discover any.

NATO is getting hammered by critics, including during its press conferences, especially by reporters from such groups as Jane’s Defense Weekly, who know a thing or two about weapons and war. Last week Jane’s ridiculed the NATO commander who claimed that seeing satellite dishes on roofs was evidence of a particular site being a “Command and Control Center.”  Jane’s found that assertion silly.

Congressional sources have been demanding answers from NATO, including the following incidences of civilian deaths caused by NATO’s bombs and rockets (70% of which are US supplied, raising serious legal and political questions under the 1976 US Arms Export Control Act) and which were forwarded by a Congressional NATO liaison staffer for comment.  The exact cases sent to NATO from the US Congressional included the following with a demand for an explanation:

1. On May 13, a peace delegation of Muslim religious leaders having arrived in Brega to seek dialogue with fellow Sheikhs from the east of Libya, was bombed at 1 a.m. in their guesthouse by two US MK 82 bombs.  Eleven of the Sheikhs were killed instantly and 14 were seriously injured. NATO claimed the building housed a “Command and Control Center.”  All witnesses and the hotel owner have vehemently denied this claim.

2. During the early morning of June 20, 8 US missiles and bombs supplied to NATO targeted the home of Khaled Al-Hamedi and his parents and family.  Fifteen family members and friends were killed, including Khaled’s pregnant wife, his sister, and three of his children. NATO said it bombed the home because it was a military installation. Witnesses, neighbors and independent observers deny there was ever any military installation or troop presence on the property.

3. In late June, on the main road west of Tripoli, a public bus with 12 passengers was hit by a TOW missile, killing all the passengers.  NATO claimed that public buses are being used to transport military personnel.  Foreign observers, including this one, unanimously aver that they have not seen military personnel in Tripoli, including tanks; APC’s or even military equipment.

4. On June 6, at 2:30 a.m. the central administrative complex of the Higher Committee for Children in central Tripoli, two blocks from this observer’s hotel, was bombed with a total of 12 bombs/rockets. The complex housed the National Downs Syndrome center including its records and vital statistics office, the Crippled Women’s Foundation, the Crippled Children Center, and the National Diabetic Research Center.

5. On June 16, 2011 at 5 a.m.  NATO bombed a private hotel in central Tripoli, killing three people and destroying a restaurant and Shisha smoking bar.

NATO response was to thank the Congressional office for the “interesting” information and then to explain, as NATO has been doing ad nauseum recently, that, “By using civilian sites for military purposes, the Qadhafi regime has once again shows complete disregard for the welfare of Libyan civilians.”

NATO’s response continued, “Clearly, the main issue for NATO are allegations of civilian casualties, but it’s important that we put those allegations in context of the NATO mission. Each and every civilian death is a tragedy. Obviously, more than we would like to see, sometimes, due to a technical failure, one of our weapons does not strike the intended military target.  We deeply regret these tragic accidents and we always convey NATO condolences to the families of all those who may have been involved.”

NATO’S response continued: “When NATO believes we have caused civilian casualties we will say so and we will do it as swiftly as we can establish the facts. If you look at our track record after nearly 15,000 sorties and nearly 5,000 strike sorties you can see we have taken utmost care to avoid civilian casualties and will continue to do so. Finally, let me assure your Office that our mission fully complies with United Nations Security Council Resolution 1973 and our mandate remains to use all necessary means to prevent attacks and the threat of attack against civilians and civilian populated areas.”

As international pressure builds on the White House to call off the NATO bombing campaign, several proposals are being discussed within the African Union, the Russian and Chinese Embassies, and even between the “NATO rebels” and representatives of the Libya government in Tripoli.

One possible scenario might be for Libya to offer Obama and NATO a fig leaf which would include Colonel Qadaffi “retiring to his tent to write and reflect” while dialogue takes places among the Libyan people, including the tribes and 600-plus People’s Congresses, which of course should have been allowed to take place as Congressman Dennis Kucinich and others insisted back in February, before NATO invaded.