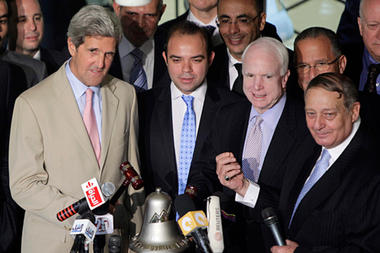 As for the presence of Zionist luminary Joe Lieberman in Tunisia and Egypt, will Egyptians and Tunisians now be questioning what they were revolting about and for what purposes? Probably not. Once the spectre of the atavistic mob is unleashed under the guise of “liberty, equality, fraternity,” as the revolutionaries of another era put it, it takes some time for the ramifications of their actions to be comprehended. The disquiet that was expressed regarding the toppling of regimes “friendly to the USA” and how their demise might impact negatively on Israel was smoke and mirrors. The likes of NED, IRI, Movements.org, etc are not going to back any movement that endangers the Zionist entity in Palestine. Lieberman had been among the most aggressive of Senators in urging military action in the Middle East.[13] The Arab “democrats” have sold their birthright for a mess of pottage, for nothing other than the nebulous glitter of the golden calf from far off America.

“What’s Behind the Tumult in Egypt?,” Foreign Policy Journal, February 1, 2011

[7] McCain visited Myanmar on June 1, and urged the USA to maintain its economic sanctions, suggesting that Myanmar might face an “Arab-style revolution.” Wai Moe, “McCain: Burma Could Face Revolt, Sanctions Should Remain,” The Irrawaddy, June 3, 2011, http://www.irrawaddy.org/article.php?art_id=21427

In other words, McCain warned that the USA would continue applying the economic pressure, while the “Red Power” activists could expect US support in the event of a revolt.  See: K R Bolton, “Myanmar Targeted by Globalists,” Foreign Policy Journal, June 1 2011, https://www.foreignpolicyjournal.com/2011/06/01/myanmar-targeted-by-globalists

[8] C David Welch, now a president of Bechtel Corp., has a long career as a US diplomat, served on the National Security Council, and was ambassador to Egypt. C David Welch, “Biography”, US State Department, March 25, 2005, http://www.state.gov/r/pa/ei/biog/43834.htm