The Ultra-Importance of Turkish AKP’s Parliamentary Victory for Iran 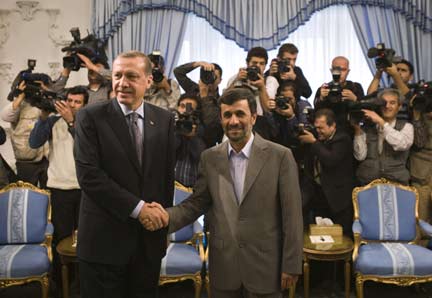 One of the countries most jubilant about the AKP’s June 2011 parliamentary victory in Turkey is Iran. After the formal announcement of the polls results, Iranian president Mahmoud Ahmadinejad was one of first leaders who extended his congratulations to Recep Tayyip Erdogan and President Gul. Although relations between Iran and Turkey have been generally peaceful since the establishment of the Republic of Turkey (1923), it has also sometimes been strained and there have been a lot of ups and downs. 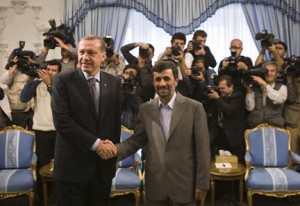 Turkey has been a long a strategic ally of the US and Israel in the region, but after the AKP came to power in 2002, its foreign policy has changed dramatically from pure pro-Americanism to regional equilibrium, a shift dubbed Neo-Ottomanism. It means that hereinafter, Turkey does not follow the US or the West completely; it follows what they see as their newly-defined national interests, in which sympathy to the Islamic world is one of the pillars of their new foreign policy. Hence, Turkey’s harsh position against the Israeli massacre against Palestinians in the Gaza Strip from December 2008 to January 2009 and the Israeli attack against the humanitarian aid flotilla, during which nine Turkish citizens were killed. Its stance showed the real essence of Turkey’s foreign policy.

Of course, Turkey is going to show as a modern secular state that can perform as a model for Muslim countries with its moderate attitudes. In this regard, it is not against the US policy dubbed as the Greater Middle East. Turkey is not going to be anti-US, but it is just going to define itself as a multi-dimensional identity, especially with its Islamic elements. So, it may sometimes be that its policies do not agree completely with the US, especially on Iran and Israel.

Iran and Turkey have developed their political and economic cooperation remarkably after 2002; particularly in the nuclear negotiations in which Turkey has become a reliable diplomatic partner. Ali Akbar Salehi, Iran’s foreign minister, has reiterated that strengthening of relations between Iran and Turkey is both nations’ priority, and Tehran considers Turkey as a powerful and strategic neighbor with which it has lots of commonalities. Elsewhere, Ali Larijani, Iranian parliament Speaker, in a meeting with Abdollah Gul, thanked Turkey for its stance vis-à-vis regional issues, particularly the question of Palestine and Iran’s nuclear program. He dubbed two nations relations as strategic: “Strategic cooperation between the two countries contributes to regional and global peace and stability”.

Signs of changes in the two counties’ relations have been spotlighted when Turkey removed Iran from its list of national security threats in August 2010. Ankara also voted against the UN Security Council resolution on intensifying economic sanctions against Iran in June 9, 2010. Shortly before that, Turkey and Brazil signed an agreement for nuclear fuel exchange between Iran and major powers in a bid to solve the Iranian nuclear crisis, but the major powers (the P5+1) rejected it. This rejection provoked harsh criticism of the Turkish prime minister, who said: “In fact, there is no nuclear weapon in Iran now but Israel, which is also located in our region, possesses nuclear arms. Turkey is the same distance from both of them. What has the international community said against Israel so far? Is this the superiority of law or the law of superiors?”

Bolstering of relations between Turkey and Iran, both Muslim nations with a combined population of around 150 million, has culminated in the strengthening of economic and trade cooperation. While the trade volume was $1 billion in 2000, it has reached around $10 billion in, according to official figures, and it is supposed that the two countries will increase this level to $30 billion by 2014. After the banking limits of the UAE against Iranian foreign trades, Tehran diversified its foreign economic relations, and Turkey is one of the big Iranian foreign trade targets. Thus, Iran could reduce the role of the UAE in its foreign trades and bypass the sanctions.

Turkey imports on average about 10 billion cubic meters of gas from Iran annually, which is about 30 percent of its needs. Turkey plans to invest $12 billion in developing phases 22, 23 and 24 of the South Pars gas field.  In July 2010, Iran could hammer out a contract with a Turkish company to build a gas pipeline 660 km long, which would allow Iran to export about tens of billions cubic meters of gas to Turkey and Europe. On tourism, every year, between one to two million Iranians visit Turkey, which is very important for Turkey’s economy.

Culturally, Recep Tayyip Erdogan, who is a Sunni Muslim and leads a conservative moderate Muslim state, in a quite significant motion, participated in the Shiite ceremony of Ashura in 2010, in the presence of Ali Akbar Velayati, one of the top advisers to Ayatollah Ali Khamenei, the supreme leader of the Islamic Republic of Iran. This event was a first in Turkey, and it had wide coverage in the Iranian media. At the same time, there is not a day in which the Turkish movies and series with religious themes are not aired in Iranian TVs.

Therefore, the AKP is not expected to distance itself from the US strategically, but paradoxically flirts with two apparent enemies simultaneously, i.e., the US and Iran. In Iran, the Turkish parliamentary results were welcomed strongly, and it means that Tehran considers Turkey with the AKP’s steering as in its strategic interests. Iran is hopeful that after the collapse of Mubarak’s regime in Egypt, the triangle of Iran, Egypt and Turkey can make gigantic changes in the region.