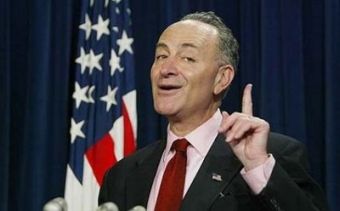 The recent call by U.S. Senator Charles Schumer for increased rail safety funding and the creation of a “no-ride” list for Amtrak trains is yet another reminder of just who is stoking fear of Muslims in America.

In an interview last year with a Jewish radio talk show in New York, Senator Schumer said he believed that HaShem (an Orthodox Jewish term for “God”) gave him the name “Schumer” — which means “guardian” — so that he could fulfill his “very important” role in the U.S. Senate as a “guardian of Israel.” Presumably, Schumer’s God-given role also includes turning the country he is actually paid to represent — the United States — into an Islamophobic police state. 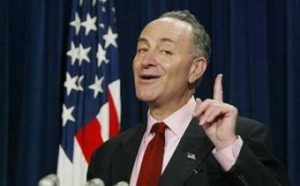 Americans wondering what happened to their freedoms since 9/11 need to understand the key role played by ardent pro-Israelis like Schumer in undermining their civil liberties under the guise of protecting them from terrorism.

On October 11, 2001, exactly one month after 9/11, Senator Joe Lieberman introduced a bill to establish the Department of Homeland Security. Since then, “the No. 1 pro-Israel advocate and leader in Congress” has been the main mover behind such draconian legislation as the Protect America Act of 2007, the Enemy Belligerent, Interrogation, Detention, and Prosecution Act of 2010, and the proposed Terrorist Expatriation Act, which would revoke the citizenship of Americans accused of providing “material support” to a foreign terrorist organization, i.e. groups such as Hamas and Hezbollah that are legitimately resisting Israeli occupation and aggression. Lieberman, who was Barack Obama’s mentor when he entered the Senate, has even proposed a bill which would give the president the power to kill the Internet in the event of a so-called “national cyber-emergency.”

Although it would be hard to think of anyone who has done more to undermine American freedoms than Joe Lieberman, Michael Chertoff runs him a close second. A mere 45 days after the September 11 attacks, the infamous 342-page document known as the USA PATRIOT Act was signed into law. It was co-authored by Chertoff, then head of the Justice Department’s criminal division. Chertoff, whose mother, Livia Eisen, was an El Al air hostess believed to have had links to the Mossad, was appointed secretary of Homeland Security in 2005, after having been endorsed for the job by Senators Schumer and Lieberman.

Since he left public service in 2009, Chertoff co-founded the Chertoff Group, a security and risk-management firm, whose clients include a manufacturer of full-body scanning machines. After a young Nigerian without a passport — the so-called Christmas Day “underwear bomber” — was allowed, in the words of Ha’aretz, to “slip through” security at Schiphol Airport by the Israeli security firm, ICTS International (which was established by former members of Israel’s internal security service, the Shin Bet), the former Homeland Security chief was all over the mainstream media touting full-body scanners as the answer to America’s airline security problems.

On September 11, 2001, within hours of planes having struck the World Trade Center (recently leased by an extraordinarily “lucky” Larry Silverstein, a friend of not one but four Israeli prime ministers), the then former Israeli Prime Minister Ehud Barak dropped into the BBC studios in London to interpret what the attacks would mean for travellers’ civil liberties. “In this area, we will suffer,” Barak confidently suggested. “It will not be so easy to go aboard an airplane in the near future. But we have no way but to stand firm facing terror. Otherwise, all our way of life will be threatened.”

Later that evening, Benjamin Netanyahu let slip that the deaths of almost 3,000 Americans was “very good” for Israel. In particular, the mass murder proved to be very good for an emerging sector of the Israeli economy. In “Laboratory for a Fortressed World,” Naomi Klein detailed the post-9/11 “explosion of Israel’s homeland security sector.” Writing in 2007, Klein observed: “Before 9/11 homeland security barely existed as an industry. By the end of this year, Israeli exports in the sector will reach $1.2 billion — an increase of 20 percent.”

Consequently, Americans concerned about what “homeland security” is doing to their civil liberties need to be asking: Exactly whose “homeland” and whose “security” is being protected by the likes of Schumer, Lieberman and Chertoff?