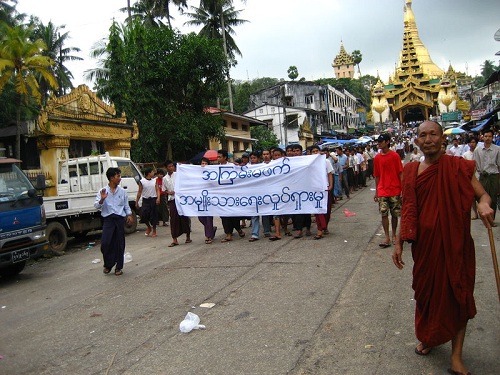 It seems clear now that whenever a regime is damned as repressive by “world opinion” then it is being marked for “regime change” in the interests of global capitalism. One should consider this before getting too enthused when the masses “spontaneously” pour out onto the streets demanding “democracy,” which should be interpreted rather as “plutocracy.” The same pattern has been followed in Eastern European, Central Asia, North Africa and adjacent areas, and Myanmar. Venezuela and Belarus are also particularly of interest to the globalists.

Myanmar was already the setting of a “color revolution” in 2007. As soon as Laura Bush was on Television referring to the “Saffron Revolution”,[1] the code word had gone out to the world that Soros/CFR et al were trying to pull off another money coup in the name of “human rights.” 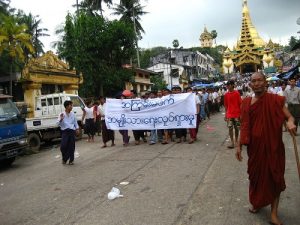 In 2010, the military junta stepped down and allowed elections. It doesn’t really matter to the globalist wire-pullers whether an election is “legitimate” or “fraudulent,” in their eyes. It does not really matter whether a regime is brutally repressive towards its own population or of genteel disposition. The globalists have no genuine and convincing objection to China’s domination of Tibet, where predatory capital can deal very well with China in exploiting Tibet’s resources.[2] The global corporate elite backs states that are Left, Right, or Center; democratic or dictatorial, on the basis of profit maximization and/or geopolitical considerations. Cant about democracy and human rights is purely for subversive or war-mongering purposes. It has been used by war-mongering humbugs as a propaganda device at least since the time slavery was made the ostensible issue for warring against the Confederate secessionists, and when the “human rights” of the Uitlanders in South Africa were made a cause celebre to allow monopolists to declare war on the Boer folk to secure the resources of that territory. In more recent times the same propaganda was used to demonize Saddam’s Iraq and Serbia for the purposes of grabbing the mineral wealth of Kosovo. It is being used now to justify the bombing of Libya. One should, then, ask what it is about Myanmar, other than the humbuggery about “human rights,” that is really behind the on-going US “interest” in the state?

John McCain’s Visit to the Opposition

Senator John McCain has a particular interest in Myanmar. He is about to meet with the much touted Nobel Prize-winning “democratic opposition” leader Aung San Suu Kyi. Why is McCain meeting with Suu Kyi, and as far as is known at the moment, not meeting with the actual leadership of Myanmar?[3] The answer would surely be that the interests he represents wish to access the situation in a way antagonistic towards the present regime; in which case Myanmar’s leadership should tell McCain and any other such Americans to stay out because they are reckless subversives. Reports state further:

The senator has been one of the foremost critics of Myanmar’s military junta that ruled the country from 1988 to 2010 before passing power to an elected government after a general election in November.

The election, labeled a sham by Obama, was won by the pro-military Union Solidarity and Development Party, which is packed with former military officials, including ex-general Thein Sein.

McCain’s visit is to follow other high-profile visits since new government of Myanmar, which has long been denounced by the United States for human rights abuses, took office on March 30.

Yun, who also met with Suu Kyi, told the Nobel Peace Prize laureate that he ‘wanted to see significant development here’ before the US would consider lifting sanctions on the government.[4]

The abortive “Saffron Revolution” of 2007 was supposed to follow the same course as other “color revolutions” but fizzled. The color designation, saffron, was chosen as a psychological ploy, being the color of the robes worn by the monks in the forefront of the streets marches. There’s nothing like putting monks, priests, or women and children at the forefront of marches to achieve the desired martyrs and appropriate television images.

Myanmar is one of the primary states of interest to George Soros’ globalist network and to the Council on Foreign Relations. The Soros Open Society network includes a “Burma Project Southeast Asia Initiative.” This has been going since 1994,[5] for the purposes of changing Myanmar into an “open society,” which is to say, “open” to predatory capital. As had been apparent in many of the “color revolutions” around the world, from the recent one in Egypt[6] to those in Eastern Europe, there is often a leader-in-waiting that has the patronage of the globalists, ready to take authority in the advent of a “regime change.” In the case of Myanmar, the position seems to be held by Suu Kyi, leader of the National League for Democracy, whom McCain will be meeting. When Suu Kyi’s detention was extended in 2009 due to the actions of an American swimming across a lake to visit her, Soros’ network mobilized, and one might wonder whether the reckless American prank was a ploy, given that Suu Kyi was due for release. Open Society states of its mobilization:

A coalition of Open Society Institute grantees has launched a major campaign calling for a global arms embargo and international pressure on the Burmese junta to release Aung San Suu Kyi before the military-supervised elections planned for 2010.[7]

As elsewhere, OSI funds opposition media, the primary recipient for Myanmar being “Burma News International.” [8] As with the other targeted states, OSI trains and funds “activists” working for an “open society,” the grant making priories being:

Advocacy efforts that promote change in Burma; Documentation of rights abuses that complement advocacy efforts; Community empowerment and skills training that aim to strengthen civil society inside Burma and along its borders; Support for media and information dissemination to people inside Burma, the diaspora, and the international community.[9]

Soros was a member of the “task force” under the auspices of the Asia Society, a Rockefeller think tank that interlinks with the CFR and has played a prominent role in US-China relations. “Co-Chairs” were: General Wesley Clark, former NATO commander who oversaw the war against Serbia, which the task force report characterizes as saving Albanians from “ethnic cleansing” (as distinct from saving Serbians from the KLA’s “ethnic cleansing”); and Henrietta Fore, CEO of Holsman International investments[10], and former administrator of USAID. Members came from academia, Human Rights Watch, Open Society and Asia Society.

The National League for Democracy should continue to be a focal point of U.S. policy support, and its leader, Aung San Suu Kyi, will remain an important figure for achieving the dialogue necessary to bring about national reconciliation of the military, democracy groups, and minority nationalities. At the same time, U.S. policy also must place greater emphasis on reaching out to other democratic forces, including civil society groups, and ethnic minorities and ensuring that they benefit from U.S. assistance programs inside Burma.[11]

What can be deduced is that, as in Central Asia, Eastern Europe and the Near and Middle East, the US will directly intervene in the political processes of a sovereign state and assist opposition political parties. It is also notable that there is a focus on supporting “ethnic minorities,” which have often provided a means of subverting a state under the guise of “human rights,” whether it be Hitler marching into Czechoslovakia to save the Sudeten Germans, or the US backing of Albanian gangsters against Serbia.