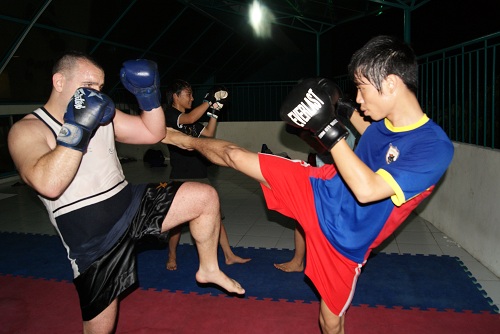 My first experience training with a Vietnamese boxing and Muay Thai team didn’t work out very well. A bigger boy picked on me, and smashed my innards into jelly. After it didn’t hurt to pee or think anymore, I began looking for a new place to train. Luckily, my Vietnamese teacher found me a Muay Thai team right near my house in District 1. 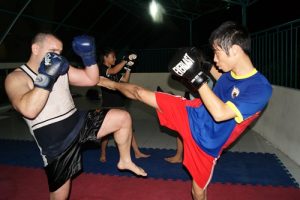 All over Hanoi and Saigon, I had noticed these multi-sport complexes, which I can only assume are sponsored by the government, offering a wide variety of activities, from ping pong to ballroom dancing, and every type of sport or martial art imaginable, for ridiculously low prices. Whenever I drove past one, I would sort of glance at the sign with the list of martial arts on offer, but I never expected to find Muay Thai at one of these places.  My teacher took me to a sport centers, less than a mile from my house, and showed me the signboard which clearly read, “Vo Thai Lan,” Vietnamese for “Muay Thai.”

Training with this team was an incredible opportunity to practice my Vietnamese. In fact, even signing up was a linguistic workout. I asked about the fee, and the office lady explained. “The class meets three days a week and costs five dollar a month.”

That was well within my budget, so I was getting excited. But then she said something else, which I didn’t quite catch. What I heard was “something, something, problem, start next month.”

After she explained the third time, I figured out that what she was saying was that they couldn’t pro-rate the study fee. It was already the fifteenth of the month. If I started tonight, I still had to pay the full five dollars.

“That’s OK.” I said, “I can pay the full fee.” In Thailand, I pay local price for my Muay Thai gym, and it costs six dollars per session.

Next, the office lady asked me if I had done Muay Thai before. I told her I had trained in Thailand and Cambodia for years. She said, “But this class is for beginners.”

“Do you have a class for advanced students?” I asked reasonably.

“Ok, then this is the right class for me,” I said.

Honestly, I have never attended even a single Muay Thai “class” in my life. In Thailand and Cambodia, we train, we don’t study. When you come in the gym, it is assumed that you already know Muay Thai and the coaches and trainers are there to help you hold the pads and to give you some pointers. But there is no actual syllabus or curriculum. And, every person in the gym is doing his or her own training: parallel training, not group training.

All I really wanted from the class was to be permitted to train by myself. I had a whole speech prepared for the teacher, the crux of which was, “I’ll stay out of your way if you let me hit the bag.”

The Muay Thai class trained on the top floor of the stadium, on sort of a huge outdoor balcony. It was a cool place to train and the balcony even caught a breeze from time to time. On the first night, the students explained to me that the coach was away. I told them that it didn’t matter and that I was fine training by myself.

I shadow boxed for a while and then worked the bag, as I would in Thailand. Just like the gym in Cho Lon, the bags were much too light for me. But, at least these bags were actually kicking bags and not boxing bags. It was a step in the right direction. Also, because the students were such absolute beginners, they didn’t use the bags. So, I could do as many rounds as I wanted. Watching out of the corner of my eye, I saw that the class was a real class. There was an assistant instructor leading the group. The twenty or so students stood in rows and did everything the teacher did. He had them practicing basic left right combinations and later added kicks. Like the other Muay Thai guys I had trained with in Cho Lon, most of the kicks looked more like martial arts than like Muay Thai. During the breaks, various students came to speak to me, in Vietnamese. Several told me that they had done Vo Co Truyen or Vo Vinam before.

By the end of the first session, the students figured out that I could speak Vietnamese and they all wanted to come over and talk to me, asking me about training in Thailand and about fighting. It was a great experience. I left the gym with a great feeling in my heart. One of the main reasons I wanted to leave Vietnam was because I had no place to train. Now that I had that problem solved, maybe I could stick it out and finish my program at the university. The only dark cloud hanging over my head was that I hadn’t met the coach. For all I knew, he was going to be like the drunken coach who I almost came to blows with on the other team I was training with.

On my second night of training, I met the teacher. He was in his late forties or early fifties and seemed very nice. He definitely didn’t seem like someone who was going to tap dance on my belly while I did sit ups. And that is the standard I hold people to now. The teacher also didn’t seem like a former fighter. In fact, given his age, it was nearly impossible for him to have been a fighter in Thailand. Instead, it seems he was actually trained as a Muay Thai trainer. He ran the class with purpose, driving the students through technically correct exercise after exercise.

At first, he just left me alone, to train on the bag by myself. He had that sneaky look of good coaches, however. While it appeared he had left me alone to concentrate on his students, he was actually watching me at the same time. After about an hour, he came over and told me everything I was doing wrong.

He had me doing a lot of fundamental drills. It is so important to return to fundamentals after you have been training for years. He had me reworking my elbows, my footwork. He taught me long range punches, which are something I don’t normally throw.

The coach worked with me, showing me how they place their covering fist right on their forehead when throwing an elbow strike. He hit me, hard in the forehead, sending a shock wave all the way down my body, but clearly demonstrating the importance of this guard. He also showed me why they throw the elbow from top to bottom rather than from the side or in a slashing motion. Top to bottom has the highest probability of slipping through the gloves, even if someone blocks.

He had me stand really far away from the bag, leap in with a long hook, and follow through immediately with an elbow to the face. My hooks are actually boxer’s hooks, which only travel about six inches. They have a lot of power, but when I am in hook range, I am also inside the range of my opponent’s knees and elbows, which the primary problem for boxers who try to convert to Muay Thai. This leaping hook, followed by an elbow was a devastating combination. For me, as a close-in fighter, this was great, because it helped me to cover the distance. You could even be outside of kicking range and throw this long range slide and punch. Of course, the follow up elbow might end the fight.

Next, he had me hold the bag, as I would hold an opponent on the sides of the neck and head, and hit it with knees. On the knee, he showed me why they always come in from outside, swinging the leg in an arch, so the knee comes in parallel to the ground. The reason is, this way, if the man drops his elbow to block, you will crash the side of his arm, or the side of his bicep, injuring him, but you will be unhurt. If you are coming straight up, you run the risk of hitting his elbow and ruining your own knee.

He had me do a lot of basics like this, getting me up on my toes and shuffling my feet, alternating left and right knees. When I was too tried to continue, we sat and he just talked, endlessly, in Vietnamese, showing me fundamentals, why we cover this way, why we raise the shoulder, how we rotate the body when doing a backward elbow, and so forth. It was incredible. Most of the students understand about a third of what I say in Vietnamese. The teacher understands nothing. But, I understand at least half of what he is saying, and the rest I get from his body language.

In that moment, that first drink of water after nearly ten months in the desert, I remembered why I had come to Asia in the first place. I remembered nights at the temple, having my monk teachers talking to me like that, or Kru Ba in Thailand, and later Kru Lek or Kru Bu in Cambodia, Wang Jiao Lien and Chun Ging Hway in Taiwan—just rattling on comfortably, intelligently in a foreign language which I now understand. Talking about the subject they love best of all, fighting.

I count myself doubly blessed, not only would very few foreigners ever get this far in the study of the language or the martial art, but these older teachers often recognize that I am at a very different level than their young, local students. And so, I am hearing and learning things the kids may never know.

It was magic. It was the magic I had been looking for and I have finally found in Vietnam.