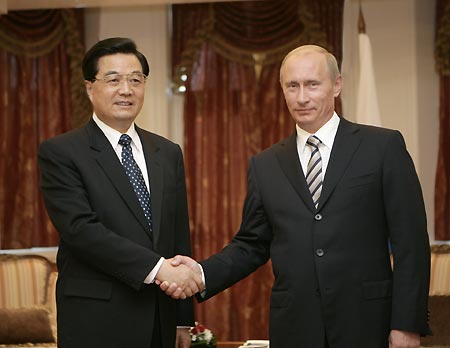 In addition to the Rockefellers, the Soros Empire has become an important factor in the globalist power structure. George Soros, it might be significant to note, is often reported to be at loggerheads with the neo-con faction, which might be an example of the dichotomy existing between neo-cons and globalists in the US Establishment. Soros, like the Rockefellers, is a pro-China enthusiast and seeks the incorporation of China into a “new world order.” A report of an interview by Soros with the London Financial Times in 2009 states:

Billionaire globalist George Soros told the Financial Times during an interview that China will supplant the United States as the leader of the new world order and that America should not resist the country’s decline as the dollar weakens, living standards drop, and a new global currency is introduced.

Asked what Obama should discuss when he visits China next month, Soros stated, “This would be the time because I think you really need to bring China into the creation of a new world order, financial world order,” adding that China was a reluctant member of the IMF who didn’t make enough of a contribution.

“I think you need a new world order that China has to be part of the process of creating it and they have to buy in, they have to own it in the same way as the United States owns…the current order,” said Soros, adding that the G20 was a move in this direction…

Soros said the world would have to go through a “painful adjustment” following the decline of the dollar and the introduction of a global currency. Reading between the lines, he essentially threatened to kill the dollar completely if the United States did not get on board with the global currency.

Soros predicted that China would become the new engine of the global economy, replacing the U.S., and that this would slow economic growth and reduce living standards. Soros characterized the United States as a drag on the global economy because of the declining dollar.[21]

The following month Forbes reported that, “George Soros is pouring money into Chinese stocks. That’s because the billionaire believes China will emerge as the big winner after the global financial crisis passes, while the United States will lose the most in the long run from the recent turmoil….”

Soros is keen to invest in China. To understand more about China’s latest social and economic developments—and to help him spot out investment targets—he recently met some Chinese scholars and experts in Budapest, where he was born in 1930.… China is likely to be a “positive force” in the global economy, Soros said, while the United States will be “limping along.”[22]

The internationalist faction based around Soros and Rockefeller interests has no motive in wanting “regime change” in China or any geopolitical shift that will destabilize China. It is Russia that does not fit into the “new world order,” and the natural bulwark against Russia is China, as in the days of the “Cold War.” More recently, Soros reiterated the rise of China as the up-and-coming factor in the “new world order,” stating: “China has risen very rapidly by looking out for its own interests. They have now got to accept responsibility for world order and the interests of other people as well.”[23] Therefore, according to Soros, there needs to be a shift in attitude among Western states that will encourage China to play its full, even dominant, part in a new international system.

Mr. Soros even went so far as to say that at times China wields more power than the U.S. because of the political gridlock in Washington. “Today China has not only a more vigorous economy, but actually a better functioning government than the United States,” he said, a hard statement for him to make because he spent much of his life donating to anti-communist groups in Eastern Europe.[25]

What Foreign Policy editorial writers are unlikely to understand is that it is not “communism” to which Soros and other luminaries of international capital are opposed, but those types of “communism” that do not accommodate their designs, while other types of communism, such as the Chinese, are not only acceptable but beneficial; just as international capital will support or oppose, according to pragmatic or dialectical interests, democracy and dictatorship, “Left” and “Right.” Any desired change in China will be hoped for in a less dramatic manner than the “regime change” “color revolutions” that Soros, et al, have instigated in the former Soviet bloc states in order to surround Russia. A “return to authoritarianism” and the “wrong direction” maintained by Russia under Putin are the primary threats to this globalist paradigm.

As far as the Sino-Russia situation goes, in any conflict between the two the globalists will be pushing for the US to align again with China against the old bugbear, Russia. In the not too distant future, water will become a cause of conflict more so than oil, and crises scenarios, including the return of ancient rivalries and simmering territorial disputes, will re-emerge across the entirety of the Asian region, impacting in a major way on Russia and her traditional allies, including India. The recent Russian military deployment of attack aircraft in Russia’s Far East, a wealthy region of historic contention, and feeling the pressure already from China, is symptomatic of the historical animosities that are barely subdued under the façade of superficial “co-operation treaties.”

DefenceNet is described as: “The website www.defencenet.gr , belonging to media production and defense applications, DefenceNet Media and is the first news portal to traffic in Europe and one of the leading sites on National Security, Defense Finance and geostrategic. … the group … are the most recognized analysts and researchers with important work at the Institute for Defense Analysis (IAA) of the Ministry of National Defense.

[10] Jack Kemp, et al, Russia’s Wrong Direction: What the United States Can and Should do, Independent Task Force Report no. 57 (New York: Council on Foreign Relations, 2006) xi. The entire publication can be downloaded at: http://www.cfr.org/publication/9997.

[13] The Trilateral Commission: About the Organization: http://www.trilateral.org/about.htm.

[19] “Enigmatic” because there has been doubt expressed by “sceptics” as to whether he actually exists, a question that can quite readily be answered by referring to his influential involvement with the Rand Corporation and the CFR:

He is a member of the Council on Foreign Relations, the International Institute of Strategic Studies, the Advisory Board of RAND, the Corporate Advisory Board of the Pacific Council on International Relations, the Board of the Western Justice Center Foundation, and the Central China Development Council and has served as a participant in the World Economic Forum and the Aspen Institute. He also serves as a director of the Pacific Rim Cultural Foundation, and is a member of the boards of visitors of the law schools of the University of Oregon and of Pepperdine University. http://www.nicholasrockefeller.net/