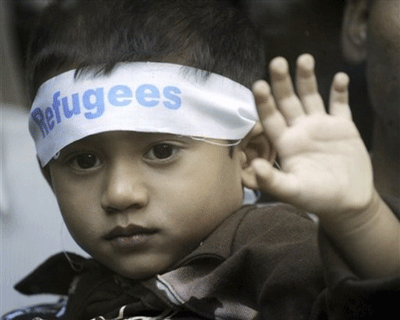 For seven days, they were locked in a container, traveling in the back of a truck. With no idea where they were going, they may just as well have been sold into slavery or prostitution at the end. But their situation in Burma was so dire that even taking such a risk seemed worthwhile.

In an anonymous housing block in Kuala Lumpur, Malaysia, a Shan refugee, 29-year-old Hsai Yisep (not his real name) told me the story of his desperate escape from a dictatorial regime. (Most of this text is a transcription from a recorded interview I conducted with Hsai Yisep and other Shan refugees. In some places, I have corrected their grammar, just to make it more readable. But to the extent that I was able, I left the text in their exact words. I have omitted all of their names and been vague about location, for the sake of their safety.)

“The Burmese took our farm, so we didn’t have any way to grow food. Every day, they would come to our village and ask for forced laborers. If we didn’t go, they would just take us and make us work. One day, we couldn’t provide enough people, so they took us. We told them we were sick from working for them every day, and that we didn’t have food for our families. So, they beat us. Our friends came that night and helped us escape. 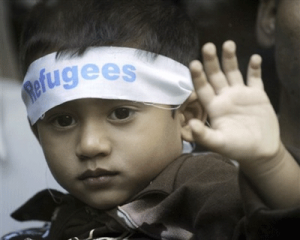 “Then we went to Malaysia.

“I went to Tachilek (on the Thai border, across from Mae Sai). Then an agent came and took me in a container in the back of a car. We didn’t know where we were going or anything. Seven days. Sometimes at night, we would run or walk through the forest, south, all of the way through Thailand to Malaysia.

“When I first came to Malaysia it was so difficult. We didn’t have any ID card and we couldn’t speak Malay or English. I learned a little English here,” concluded Hsai Yisep.

We were seated on the floor, sharing bowls of fresh fruit. At first, the refugees were understandably nervous about talking to me. These are people whose lives hang by tiny threads and blow with the political wind. One of the refugees suddenly said that he recognized me from the videos I had made with the Shan State Army in 2007 and 2008. He smiled broadly. “I saw you on YouTube, and now you are here.” He began telling the other men about me, and several of them turned out to be fans of Martial Arts Odyssey. Suddenly, my job got a lot easier.

The YouTube fan sat next to me and opened up, telling me about the arduous life of the refugee. Little by little, other refugees joined us, and began adding information of their own.

The YouTube fan told me, “Most of the Shan in Malaysia try to find work in restaurants. Some of them can speak Chinese, so they are lucky. They can work in restaurants or as sales promoters. A few of my friends can work in a workshop. They can get better pay if they know how to fix motorcycles and cars. It depends on your experience. If you can speak Chinese, maybe you can get 800 or 1,000 Ringit (about $260-$330 USD). Some people get 1,200 Ringit per month.” He, himself, was working in a restaurant.

Most of the Shan refugees in Malaysia do not possess a Burmese passport or ID card. Inside of Burma, it is extremely difficult for the ethnic peoples to obtain these types of documents. For this reason, their only means of leaving the country is to travel, crossing borders illegally. When they arrive in their destination country, be it Thailand or Malaysia, it is impossible to obtain a work permit or residency visa, because they don’t have a passport. This relegates the refugees to working illegally, and for the lowest wages.

A few of the Shan men I spoke to on this day were university graduates, but they were happy to get work as bus boys in restaurants, earning a few hundred dollars per month.

Although very few of the refugees had any clear plan upon their arrival in Malaysia, with the benefit of hindsight and experience, they explained to me that, after arriving in Malaysia, the Shan refugees should register with the Shan community office. The community will then issue them an ID card. The community card is not a legal residency permit, but at least they have something in their pocket when and if they get arrested. Next, the community will help them to register with the UNHCR (United Nations High Council for Refugees). The final step is that they get in a long cue, awaiting resettlement in a third country.

The line ahead of them moves very slowly, as less than 3% of the Shan in Malaysia will be resettled in a given year. But the line behind them grows longer and longer, as more Shan are driven from their homes by the military junta (SPDC).

But, what would happen if they were caught by the police? I asked a leader of the Shan community office.

“Get caught by the police, if you have the UNHCR card it is not a big problem. But if you have only the Shan community ID card, this is a problem. Sometimes they have combined raids with police and RELA,” replied the leader.

RELA is a volunteer police organization which enforces immigration law. Many international observers, and even the bar association of Malaysia, have petitioned the government to close this force down. Instead, RELA numbers increase each year. Members are often paid bounties for each refugee they capture.

As the government doesn’t recognize the UNHCR card as a legal residency permit in Malaysia, sometimes, even UN-registered refugees can be arrested.

“Every Sunday, the police wait by the lift and ask for your documents. If you don’t have any, they arrest you. They take you to the police station and ask for money. Sometimes our members come here to do their member card and the police catch them. They are scared to come here.

“When people get arrested they have to call the center and we go to get them out of jail. It costs a lot of money. Luckily, the government and the UNHCR together, have said that the police will not arrest our people who have UNHCR card.”

With about 4,000 completely undocumented Shan refugees wandering around, it is just a roll of the dice to see who will get picked up.

“We have about two to three times per week, someone is arrested and we have to go get them out of jail,” said the leader.

“When a Shan refugee is arrested, after two or three days, the authorities will report to the Shan community office that they have some of our Shan in jail. If it is too far, we cannot go there.”

The Shan community office has almost no money. So, even purchasing petrol or train tickets to go bail people out of jail can be problematic.

“If it is close by, we can go there. The police tell us to bring a letter from the police officer who arrested them, and we must go to meet them. Some of the officers are nice, and they will help. Some cases we can negotiate, and some cases we cannot.”

“If we cannot get the refugees out, then they stay fourteen days in lockup. After that, they are sentenced to jail. Some people serve four or five months in jail. After the jail, they are sent to the camp. The camp means ready to deport. Some have been sent back to Burma. But some have been in the camp for a long time.”

When I did similar stories on other Burmese ethnics, I was told that there are refugees stuck in the detention camp for years, with no end in sight. Burma often will not accept them and certainly won’t pay for their deportation. This leaves them in legal limbo.

“If they are in the camp, we report to UNHCR. Then, later, UNHCR will go interview them and maybe UNHCR will bail them out of the camp.”

“UNHCR helps us a lot,” said the Shan leader.