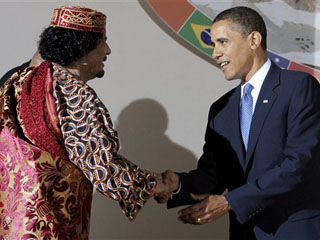 Col. Gaddafi is the perfect target, having been demonized by the West for decades as an authoritarian, and at times displaying character traits suggesting megalomania and instability. The American people were indoctrinated to hate him many years ago, so U.S. public opinion was already prepared for regime change. It was the same with Iraqi President Saddam Hussein in 2003, or Yugoslav President Slobodan Miloseviç in 1999, among many others. Demonize first, exaggerate second, attack third.

The UN Security Council’s March 17 approval of Resolution 1973 called for a cease fire, a no-fly zone over Libya, an arms ban, and a freeze of Libyan assets owned by government officials. It authorizes all necessary means to protect civilians and civilian-populated areas, but does not permit a “foreign occupation force.” The U.S. added a loophole that specified arms might be made available and other actions taken if they would “protect civilians.”

The resolution could have been defeated had Russia or China voted “no,” since  a negative vote cast by a permanent member of the Security Council amounts to a veto.  Both countries expressed qualms about the resolution but abstained, as did three non-permanent members — Brazil, India and Germany. The 10 other non-permanent votes were all “yes,” including the only Arab member of the Council, Lebanon.

A few days later, abstainers China, Russia, India, and Brazil, which account for some 40% of the world population (2.9 billion people out of 6.8 billion) expressed dismay that the resolution was interpreted by the U.S. and NATO to mean destroying Libya’s entire air defense system and most of its air force, bombing tanks and soldiers on the ground, and military installations as well as roads and sectors of civilian infrastructure. So far (April 7) NATO reports conducting over 1,000 bombing operations that have destroyed more than 30% of Libya’s military force.

The Arab members of the Security Council later issued similar objections, as did a number of other countries, but USNATO’s predictable excesses continue, and no action will be taken.

Since there’s always far more than meets the eye in these affairs, often kept secret for many years, mull over this information from Pepe Escobar, a journalist who has been writing almost on a daily basis about the uprisings for Asia Times Online. On April 2 he wrote:

You invade Bahrain. We take out Muammar Gaddafi in Libya. This, in short, is the essence of a deal struck between the Barack Obama administration and the House of Saud [which controls Saudi Arabia]. Two diplomatic sources at the United Nations independently confirmed that Washington, via Secretary of State Hillary Clinton, gave the go-ahead for Saudi Arabia to invade Bahrain and crush the pro-democracy movement in their neighbor in exchange for a ‘yes’ vote by the Arab League for a no-fly zone over Libya….

There are probably many Libyans who seek democratic change after four decades of governance by the Gaddafi family, but this government also has many supporters.  At no time has it been indicated a majority of Libyans support overthrowing Col. Gaddafi, much less back a USNATO war to install a western-aligned government in Tripoli — especially one about which considerable questions are being asked.

The U.S., Britain and France quickly supported the idea of building a coalition around the National Libyan Council including pro-monarchists, disaffected tribes in this tribal society, several former leading members of the government, some high ranking military officers and émigrés, including a few who have been in touch with various intelligence services for years.

USNATO attacks have coordinated with the anti-government political and military leaders, who are working in concert with their benefactors in Washington, Paris and London. U.S. CIA agents and Special Forces soldiers, joined by their opposite numbers from several NATO states, are operating in Benghazi and other areas not occupied by loyalist troops. They are training the anti-government troops, supplying weapons and sophisticated military hardware and communications equipment.

In the latest disclosure April 7, the “unarmed civilians” Resolution 1973 was supposed to protect have about 20 tanks at their command as well as other heavy military equipment. The information surfaced when a NATO bomber pilot thought the tanks were part of the loyalist arsenal and blew up a few of them, with their crews.

The Security Council did not authorize arming the civilians.  At this point, the resolution seems little more than permission for USNATO to destroy the loyalist army and arm the anti-government forces to install a new government in Tripoli.

However, USNATO’s plan “for the political future of Libya was undermined by the growing military doubts over the make-up of the rebel groups,” according to The Telegraph (UK) March 29. “‘We are examining very closely the content, composition, the personalities, who are the leaders of these opposition forces,’ Admiral [James] Stavridis, [NATO’S Supreme Allied Commander, Europe] said in testimony yesterday to the U.S. Senate.”

Then on April 3, longtime analyst Michel Chossudovsky wrote on the Global Research website:

There are various factions within the Libyan opposition: Royalists, defectors from the Gaddafi regime including the Minister of Justice and more recently the Foreign Minister, Moussa Moussa, members of the Libyan Armed Forces, the National Front for the Salvation of Libya (NFSL) and the National Conference for the Libyan Opposition (NCLO) which acts as an umbrella organization.

Rarely acknowledged by the Western media, the Libya Islamic Fighting Group (LIFG – Al-Jamaa al-Islamiyyah al-Muqatilah bi Libya), is an integral part of the Libyan Opposition. The LIGF, which is aligned with al-Qaeda, is in the frontline of the armed insurrection.

Chossudovsky, an Emeritus Professor of Economics at Ottawa University, and director of Montreal’s Centre for Research on Globalization, notes that the paramilitary LIFG was founded in Afghanistan by veteran Libyan Mujahedeens of the Soviet-Afghan war….  There are contradictory reports as to whether the LIFG is part of Al Qaeda or is acting as an independent jihadist entity. One report suggests that in 2007 the LIFG became “a subsidiary of al Qaeda, later assuming the name of Al Qaeda in the Islamic Maghreb (AQIM).”

During its lifetime, “The LIFG was supported not only by the CIA and The British Secret Intelligence Service but also by factions within Libya’s intelligence agency, led by former intelligence head and Foreign Minister Moussa Koussa, who defected to the United Kingdom in late March 2011.”

There is a chance USNATO may prefer a longer, drawn out struggle than their overwhelmingly superior fire power may suggest, perhaps for as least as long as the various uprisings manage to sustain themselves. Fighting for “democracy” in Libya absolves the U.S. from the accusation that is against the uprisings in its subordinate countries. At the same time, of course, the western war against Libya grabs most of the headlines and often pushes the other struggles to the background.

USNATO did not launch a war against Libya as a humanitarian gesture. If/when it removes the Gaddafi family from leadership and installs a replacement the allied military coalition will exercise decisive influence for many years to come, especially in oil concessions, privatizations and building contracts that enhance multinational corporations, air and military bases, a solid vote in the UN and other world organizations, and more.

The historic Arab uprisings of 2011 will inspire multitudes of people around the world for many years to come, even if imperialism — in league with repressive monarchies, and violent dictatorships — may crush some of the rebellions, contain others with small concessions, and perhaps implement limited democracy in Tunisia and Egypt.

What matters is that the struggle is taking place, has the support of the masses of people, and that the people are courageous and determined. There is still a chance for more immediate triumphs.

What has been happening in recent months is the “1848” of the 21st century. Most of the great European rebellions of the time were defeated, but out of those struggles came victories. Out of the great uprisings of the Arab World of 2011, and hopefully longer, will come many victories.